Nobel prize awarded to US and Danish scientists for 'simplifying' chemistry 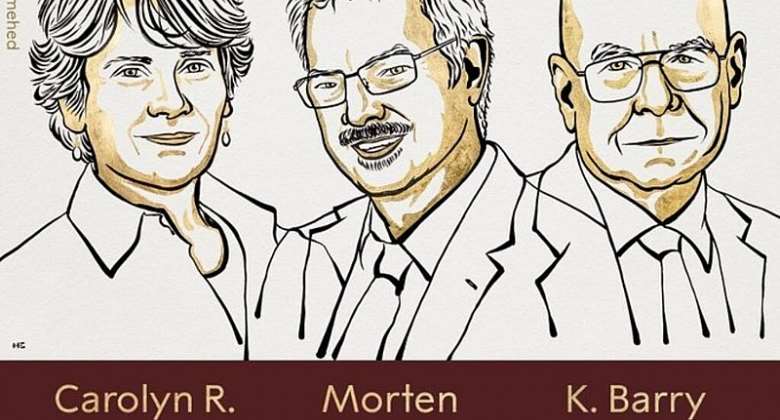 The Nobel Prize for Chemistry has been awarded to a trio of chemists from the US and Denmark who have laid the foundation for a more functional form of the science.

Americans Carolyn Bertozzi and Barry Sharpless, together with Denmark's Morten Meldal, were honoured "for the development of click chemistry and bioorthogonal chemistry," according to the jury.

The award marks the second Nobel for 81-year-old Sharpless, who won the prize for chemistry in 2001.

Only four other individuals have achieved the feat, including Polish-born Frenchwoman Marie Curie.

In a statement, the jury said "click chemistry is an elegant and efficient chemical reaction that is now in widespread use."

"Among many other uses, it is utilised in the development of pharmaceuticals, for mapping DNA and creating materials that are more fit for purpose," it added.

"This year's Prize in Chemistry deals with not overcomplicating matters, instead working with what is easy and simple," said Johan Aqvist, Chair of the Nobel Committee.

The trio will share the Nobel award sum of 10 million Swedish kronor, which is around €920,000 and will receive the prize from King Carl XVI Gustaf at a formal ceremony in Stockholm on 10 December – the anniversary of the 1896 death of scientist Alfred Nobel who created the prizes in his last will and testament.

According to the Nobel jury, Sharpless, a professor at Scripps Research in California, "started the ball rolling" and "coined the concept of click chemistry" around 2000.

"Shortly afterwards, Morten Meldal and Barry Sharpless – independently of each other – presented what is now the crown jewel of click chemistry: the copper catalysed azide-alkyne cycloaddition," the jury added.

Meldal, 68, is a professor of chemistry at the University of Copenhagen.

Bertozzi, who is a professor at Stanford in the United States, then took it to "a new level."

"I'm absolutely stunned, I'm sitting here and I can hardly breathe," Bertozzi told reporters via telephone, minutes after the announcement.

The chemistry prize will be followed by the much anticipated literature and peace prizes that will be announced on Thursday and Friday respectively.

Debt restructuring: Government now coming to the reality, we...
24 minutes ago