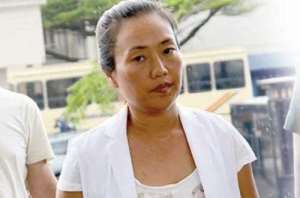 She came, she left and re-entered the country in style leaving all of us bewildered and wondering just how she did it.

Her feat has prompted varying questions with some seeking to query the security system which she walked over.

Aisha Huang is a lady with a full grasp of lapses in our society knowledge which she has used to her advantage.

Her departure from the country via deportation made as much headlines as her return and capture as it were.

It would be interesting to know whether she sought and obtained help from local persons. This and other questions are what the security agencies would seek answers to as they probe the daring Chinese lady.

For now her story should constitute a case study for both immigration officers and the intelligence community in the country.

The Chinese lady has found in Ghana so much wealth that she is unable to steer away from our minerals without calling our bluff.

We do not intend to be xenophobic but we have observed a surge in the number of persons from her part of Asia seeking minerals in this country. We would have not raised eyebrows were their activities within the confines of the law.

Many wonder whether the Galamsey Queen would face the full rigours of the law even where there is no dearth of evidence against her.

Any laxity in dealing with her as the law prescribes would surely open the floodgates for the abuse of our laws by her compatriots. We hope she understands the gravity of her daring feat and would not be laughing off the headlines as nothing but hot air.

The whole country and the social media world are watching how the matter is going to be addressed, the matter being a straightforward one.

Our laws take precedence over diplomatic niceties and so manoeuvres along such lines should not be entertained.

A rare opportunity of sending out a message that foreigners who take our hospitability for granted do so at their own risk has dawned, and we must use it.

Ours is a sovereign country in which breaches such as being perpetrated by some foreign nationals who are so obsessed with gold that they are trampling upon us, should be stopped forthwith and what better way to do this than allowing the law to take its full course.

Inflation will remain high till the end of first quarter of ...
18 minutes ago