Ghana: A country of misplaced demonstrations. 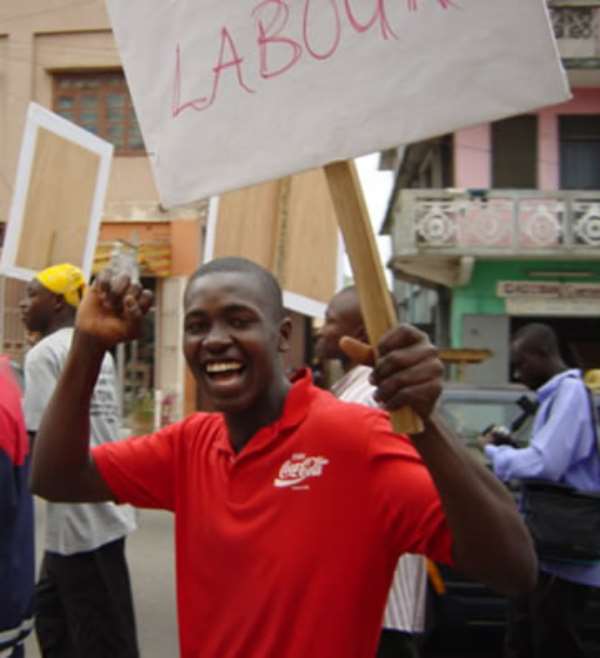 Two by-elections victory for the National Democratic Congress (NDC) , parliamentary seats previously occupied by the same party, have revived a false start to send the message across the country under the banner of a self-fulfilling prophecy - "We are coming back in 2008".

The propagandists are at it again, a perceived notion of chaos, widening the focus of misguided demonstrations based on any government policy or official pronouncement, even if it is good.

How can we progress as a country if we live with these overstretched models of deception, lack of alternatives for the so-called growing problems facing Ghana? Demonstrations have taken the place of reasoning.

The first "Wahala" press conference was to criticize the government on increased fuel prices. Afterwards, the "Wahalans" (literally translated as people going through difficulties) are now saying the present government has failed to act on its promises to emancipate the people from poverty, and to create jobs.

For now, the strategy is that , each "Wahala" political rally introduces a new agenda, which suggests that the focus of this movement is gradually shifting to the left. These are people with varied political ideology, each one has something different to talk about- from Alhaji Ramadan to Kofi Wayo. Ghanaians should scrutinize these political prostitutes.

What we see now is a confused schedule, designed by greedy , power-hungry politicians. They "preach" violence, they call for one, branded as "positive defiance". But who wants to pick a "stick" when "carrots" are available.

Peace-loving Ghanaians should not pay attention to the "protesters". They should not be surprised, that in the future Kwesi Pratt Jnr, one of the most controversial journalists in Ghana, would lead people to demonstrate against an imaginary government midwifed by the 'Wahalans", the same cause he is fighting for today.

For those who care to know, Kwesi struggles with everyday reality of governance, so is the figurative "asomdweehen"- Evans Atta-Mills- NDC's flag in the 2004 general elections.

Recently, a family friend who is a medical doctor in Michigan told me, that Kwesi Pratt Jnr, may be suffering from schizophrenia, and that his behavior swings are just normal for people who fall within that category. My reaction was , "he is exercising his right to free speech and mobility, though he chooses the wrong platform".

But the fact remains, that if the purpose of these demonstrations are to show how majority of Ghanaians are against the policies of the present government, I would be the only one left in the dark. Rather, they dent the image of the country abroad, and scare prospective foreign investors.Did I hear the same people saying the government should create jobs?

The government of Ghana should stay on course, do what it does best, and nip this nonsense in the bud. The government should not deviate from equitable distribution of development projects, seek investors who can revitalize collapsed industries, promote property-owning democracy (not property-grabbing), as well as introduce new projects to the doorsteps of communities hitherto rejected by people who are now parading as "angels", but demonstrating their anger in the name of democracy.

This is the time Ghanaians should work hard to improve themselves as these distractions take center stage with negative results.

I do agree with majority of the people who think the "Wahalans" have time at their disposal, bank-rolled by former president Jerry John Rawlings. When any opportunity presents itself, nothing good is said about a country he once ruled, perhaps, unsettled by how democracy is now thriving in Ghana.

Recently, when a friend called from one of the New England States in US, he asked me to take a retrospective view of a popular Ghanaian saying for which he believes is still relevant due to our homeland's political hullabaloo.

He said : "If people lying full length along the ground with all their eyes opened and pointed to the sky say they did not see God, how can those lying prostrate with their eyes closed can claim that they saw Him". This saying helps to unravel the hypocrisy, as peace-loving Ghanaians witness these senseless protests.

Yes. They did their best whilst playing leadership roles. Yes. There are many landmarks we are still proud of as a nation, but that era was marked by human rights abuses, disappearance of innocent Ghanaians, intimidation, fear, and brutality. It is questionable, as to whether people would accept this arrangement again.

Yes. These politically-motivated demonstrations in Ghana are becoming symbolic, partially associated with the opinion of people who think they still hold the key to Ghana's progression.

If 20 years of governance , debauchery and "crony-sharing politics" were not enough, Ghanaians who still think the NDC possesses the "magic wand" to free Ghana from social and economic problems must dig into the country's political archives for self-education.

They should explain to their followers, and all Ghanaians, how crude oil prices behave much as any other commodity with wide price swings in times of shortage or oversupply.

They should explain to the fullest, how the crude oil price cycle extends over a period of time responding to changes in demand and the relation to OPEC and non-OPEC supply. These

are some of the issues that must be simply explained to the ordinary man/or woman on the street, so that people would come closer to understanding the issues at stake.

These demonstrations do not solve problems, they rather expose ignorance and lack of fairness on the part of this Committee for Joint Action. The right way would be to inject some "street economics" into speeches when they mount the podium to criticize.

Superficial dissimilarities in politics should not surprise people who cherish democracy as a better alternative to militarism. That explains why people are committed to defending it .

Different opinions in any civilized environment are not bad either, but if the mode of transmission becomes awkward, its purpose is diffused and classified as a smear campaign.

When former corrupt ministers of state and their supporters continue to exercise their rights by protesting in a more dysfunctional way, with these protests becoming a way of life, it suggests that people just have plenty of time to waste on perceived or non-existing problems.

In reality, these demonstrations have become quaint in retrospect and increasingly irrelevant. -Author- Ato Aidoo, former associate at the features desk, Daily Graphic, Accra,Ghana. He now lives in Evans, Georgia. Views expressed by the author(s) do not necessarily reflect those of GhanaHomePage.