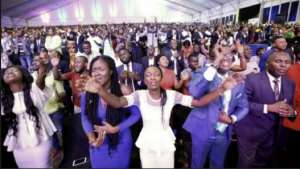 Many enter politics poor, but come out extremely wealthy. Consequently, someone has observed that most politicians throughout the world do not enter politics to make money; rather they enter politics to steal money. This is the evil undermining the development of Ghana and nearly all countries on the African continent.

Ghana's economy has always been in shambles with its currency, the cedi, depreciating against the US dollar and other foreign currencies. Concerned Ghanaian citizens blame the situation on politicians accusing them of dereliction of duty.

Critics often chastise government's economic management team for being incompetent, and generally attribute the mismanagement of the economy to corrupt practices perpetrated by government officials. The problem cannot be left unaddressed. To help tackle the problems, especially the canker of corruption, some pastors have been encouraging Christians to go into active party politics.

These pastors project that Christians with their strong Godly principles and ethical standards will help wrestle the nation from corrupt and selfish unbelievers who have been dragging the development of the country for years and restore hope to the masses. Generally, it is assumed that a good Christian proves to be a good citizen. And a good citizen proves to be patriotic, nationalistic, selfless and hardworking for better management of the economy.

Thus, true Christian politicians will not steal, embezzle or misappropriate state funds. They will not connive with foreign nationals to engage in illegal mining popularly called galamsey, and eventually destroy our water bodies. And they will not give or receive bribes while signing contracts for their selfish gains.

It is also expected that Christians with high moral uprightness and convincing traits of honesty, contentment, prudence, leadership, foresight and vision can only occupy high political positions to bring about the needed socio-economic change if they are in politics, considering the structure of Ghana's winner takes-it-all political governance system .

But a question is asked as to whether Christians are not already actively involved in politics in Ghana? Over the years, most presidents, ministers of state, Members of Parliament, the Chief Justice and the justices of the courts, Metropolitan, Municipal and District Assemblies and other handlers of the economy have been mostly Christian men and women.

In fact, it is estimated that the Christian population in Ghana is about 71.2 per cent in terms of numbers. Thus, in 2020, Archbishop Philip Naameh wondered, “If we take politics as an example, our political landscape is full of Christians. We say we are 71 per cent but who are those doing the bribery and the corruption and the stealing of state money either for our families or for our individual needs or wants?”

Is it the case that, Christians who are already serving as politicians in various departments and agencies where corruption, stealing, embezzlements and nepotistic practices occur are false Christians? “Ken Ofori-Atta, Finance Minister, said in Parliament while delivering the 2017 budget statement and economic policy of government on March 2, 2017, in Accra that, “Through Jesus Christ, we can resolve these challenges and establish a righteous and just society for all.”

There is no doubt that the Finance Minister's government, led by President Akufo-Addo, has undertaken some developmental projects in the country, but the challenges of poverty, corruption and other social vices in the country remain. Is it the case that Christians who are in politics do not uphold and live by the tenets of the Word of God?

Now, it is important to point out that in a multi-religious country like Ghana, Christians alone may not be elected or appointed into public offices, the greater percentage of the Christian population of the country, notwithstanding. Christians in Ghanaian politics peacefully work together with Muslims, traditionalists and atheists.

We know that a true Christian is not a disciple of Plato, Aristotle, Karl Max or Max Weber. A true Christian is a child of God through Christ Jesus. As a follower of Christ, a Christian is strictly required to love righteousness and hate corruption. Christians are told that they are in the world, but not of it. They must not love the corrupt systems of the world. If they do, God will become their enemy (James 4: 4).

Disciples of Christ are told that they dwell among wolves and serpents and so they must act wisely. They are exhorted that they are the light and salt of the world; hence they should lead by example. They are taught against corruption, bribery, stealing, nepotism, partiality, selfishness and other sinful behaviours.

They are told to manifest the fruit of the Spirit of God such as love, joy, peace, gentleness, patience, goodness, kindness, faithfulness and self-control (Galatians 5: 22). They are charged to avoid maligning people by making malicious utterances and speaking evil against their neighbours.

With these instructions, can a true Christian really survive in African politics which seems to thrive on institutional corruption, insults, name-calling, intimidation, hatred and campaign of calumny without disobeying the commands of his God? And what impact have Christians in government made to protect the public purse and to address the aforementioned problems?

The answers to this question is anybody's guess since most people at the helm of affairs admit they are largely Christian.

So, Brother/Sister Christian, what conscious efforts are you making to curb corruption in your business transactions with other people? Are you being honest, or, in your quest to make more money overnight you charge exorbitantly and infect them with corruption and dishonesty. Remember, if you serve poison on the table for others to eat, you will definitely have your share. “Wo to eduru bone a, ebi ka w'ano”. May God touch our hearts to repent from today.