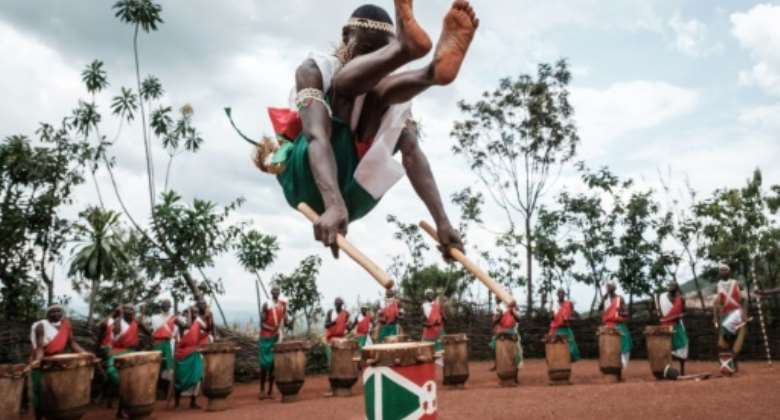 Huge leap: The centuries-old royal drum ritual was given world heritage status by UNESCO in 2014. By Yasuyoshi Chiba (AFP)

Twirling and singing, a stick in each hand, the performers are the custodians of a centuries-old ritual recognised by UNESCO, and one jealously guarded by the Burundian state.

Too jealously guarded, according to some.

"We beat the drum because it's our life, because it's in our blood," said their leader Oscar Nshimirimana, his face dripping with sweat after a spirited performance in Gishora against a backdrop of rolling green hills.

"It was not only my father who beat the drum, but all my great-grandparents," the 43-year-old said.

For a long time, the drums could only be carved from the gigantic trunks of 'umuvugaangoma', or 'the tree that makes the drum talk'. By Yasuyoshi Chiba (AFP)

Troupes hailing from Gishora -- home of a royal palace and the heartland of this musical tradition -- enjoy a lofty and celebrated status. Burundi's President Evariste Ndayishimiye graced one of their performances in January, causing a stir.

In the tiny landlocked nation of 12 million people, drumming troupes big and small perform at weddings, religious ceremonies and other celebrations -- as well as competing against each other.

Across the globe, too, drummers in the Burundian diaspora are found on at least three continents.

"The ritual dance with the royal drum" is the jewel in the country's intangible heritage, declares a culture ministry document.

"The prodigious leaps, the pirouettes, the winks to the spectators... all this has always marked this dance, as the bearer of an uncommon tradition, in the whole of African and world percussion."

The drumming tradition known locally as "ingoma" dates back to the 17th century, and honoured the eternal rule of the royal family at a time when Burundi was a monarchy.

The tradition honoured the eternal rule of the royal family at a time when Burundi was a monarchy. By Yasuyoshi Chiba (AFP)

Upon assuming the throne, a king was said to have "ascended the drum", which was considered the source of his power.

The most hallowed drums are even given names. Many have vanished through the ages but two -- known as Ruciteme and Murimirwa -- are enshrined in a traditional straw hut in Gishora.

For a long time, these drums could only be carved from the gigantic trunks of "umuvugaangoma", or "the tree that makes the drum talk".

In 2014, UNESCO recognised the cultural value of the tradition, inscribing the ritual dance of the royal drum on its list of intangible world heritage.

Drumming troupes big and small perform at weddings, religious ceremonies, and other celebrations -- as well as competing against each other. By Yasuyoshi Chiba (AFP)

Since then, the Burundian government -- an authoritarian regime that emerged from an armed rebellion -- has enforced strict rules around the practice.

In 2017, a long-forgotten edict banning women from playing the drums was reimposed, while dress codes for performers were mandated.

Troupes have since been required to formally register with the authorities, while those wishing to hire drummers for a private event need to apply for special permits costing $250.

In Burundi, which is the poorest country in the world in terms of GDP per capita, this is no small imposition.

Aimable Nkunzumwami, adviser to the culture minister, said the government had a duty to ensure "respect for the cultural identity" of the drum, especially since the UNESCO listing.

Troupes hailing from Gishora -- the heartland of this musical tradition -- enjoy a lofty and celebrated status. By Yasuyoshi Chiba (AFP)

"It is the government that (must) protect the Burundian drum. That is why it has regulated the practice," he told AFP.

In February, a troupe of drummers caused a scandal by playing at a festival in non-regulation black suits.

The festival was stopped, and the troupe suspended for six months.

In the economic capital Bujumbura, 27-year-old engineer Calixte Irantije practises twice a week after work in an open-air amphitheatre with his drumming troupe.

The most hallowed drums are even given names. By Yasuyoshi Chiba (AFP)

"These rules have caused a reduction in demand... it has had a big impact on the market we used to have," he said.

"Now we play at parties sanctioned by the government. We play at the weddings of those who have a permit, and official government ceremonies."

Some Burundians, particularly those in the diaspora, have baulked at what they saw as government overreach.

"The drum no longer belongs to the Burundian citizen. It belongs to the government," Pacifique Nininahazwe, a civil society leader living in exile, said in 2017.

The drumming tradition known locally as 'ingoma' dates back to the 17th century. By Yasuyoshi Chiba (AFP)

Julien Nimubona, a professor of political science at the University of Burundi, told AFP the restrictions were less about authoritarianism and more an opportunity for officials to make money off the UNESCO status.

"It took away something that was ours," he said.

Hottest Photo Reports
Catch up with all the political quotes from our politicians.
Advertise here
More from Burundi
ModernGhana Links
'Like a family': exercise clubs build unity in Burundi
'Not in the regime's DNA': authoritarian Burundi's slow reopening
#VisitBurundi: Influencers trying to remake their nation's image
TOP STORIES