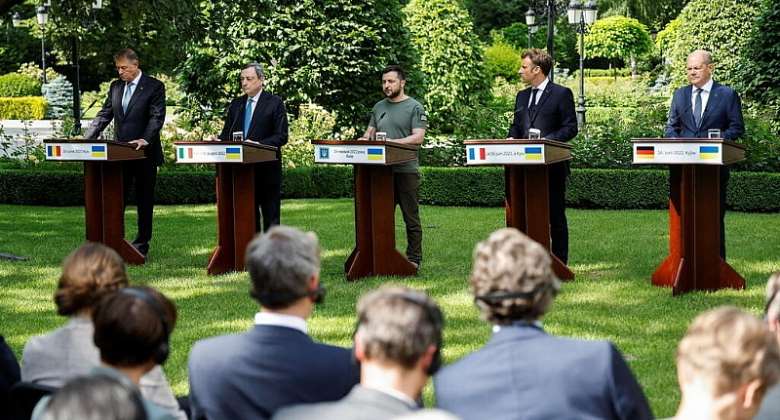 French president Emmanuel Macron on Thursday pledged his support for Ukraine's campaign to join the European Union. His backing came during a visit to the country with the leaders of Germany, Romania and Italy.

"All four of us support the status of immediate candidate for accession," Macron said at a joint press conference with Germany's Chancellor Olaf Scholz, Italian premier Mario Draghi and the Romanian president Klaus Iohannis.

Since the Russian president Vladimir Putin ordered his country's armed forces into Ukraine on 24 February, the Ukrainian leader Volodymyr Zelensky has been asking EU chiefs for rapid admission into the 27-nation political and trading bloc.

His requests have been discussed at EU meetings but several governments have expressed their reservations and warned about an overly swift accession to the group.

However, even if Ukraine's candidate status were to be approved, it is expected to be under strict conditions.

"This status will be accompanied by a roadmap and will also involve taking into account the situation in the Balkans and the neighbouring area, notably Moldova," said Macron whose domestic powers will come under scrutiny this weekend in the second round of parliamentary elections,

Work
The French president took the lead in responding to the media following talks with Zelensky due to France's role as the temporary head nation of the EU.

"We are ready to work for our state to become a full member of the EU," Zelensky said. "Ukrainians have already earned the right to go down this road and obtain this candidate status."

The prelude to next week's EU leaders summit in Brussels is likely to be marked with broadsides from the Kremlin over EU expansion hot on the heels of Finland and Sweden forgoing decades of neutrality and seeking membership of the Nato military alliance.

In another gesture of defiance towards Russia, Macron said his country will deliver another six Caesar long-range self-propelled howitzers to Ukraine to bring the total up to 18.

"We are supporting Ukraine with the deliveries of weapons," he said in response to criticism that his country had dragged its heels over the shipment of weapons."We will keep the deliveries going for as long as it is needed."

Draghi hailed the unity of the EU during the conflict.

"We are at a turning point in our history," he said. "Every day, the Ukrainian people defend the values of democracy and freedom that underpin the European project, our project.

"We cannot hesitate, delay this process. We must create a community of peace, prosperity and rights that unites Kyiv with Rome, Paris, Berlin and all the other countries that share this project."

"The most important message of our visit is that Italy wants Ukraine in the EU."