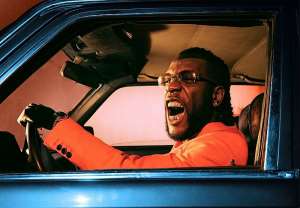 Is he now a thug, a ruffian, an outlaw, an oppressor and a bad influence instead of the musician that he is? At his age, however old he is, but I’m certain he’s a mature man, you’d expect some sense of maturity and self-respect, especially in his public conduct. He probably least trusted himself to rise to stardom so he’s self fame struck and is struggling with just how to deal with it, like some of his contemporaries in Nigeria.

He has been declared a wanted man by the Lagos State Police Command for this distasteful conduct. He is said to be a fugitive and under criminal investigation. This is bad enough for someone who is supposed to set a good example for the thousands of youth who look up to him.

No man with all his sanity intact will attempt to openly flirt with or make advances at a married woman in the presence of her husband. He was reported to be so rowdy on this occasion to the point that the police escorts had to fire guns at fun-loving nightclubbers, which left some injured and others hospitalized. Knowing that he was at fault, he quickly absconded out of the country the next day. Such cowardice! This could be proof of a lack of proper home training or some quack substances misbehaving with his God-given common sense?

On this occasion, I call on the law enforcement agencies in Nigeria to deal with such riffraff adored as a celebrity. Justice must be served. The law should work and be seen working. This presents Nigeria, with a glorious opportunity to rewrite the narrative of lawlessness. It is an opportunity to make the statement that if the likes of R. Kelly and Bill Cosby can be put before the American law, then Burnaboy should as well dance to the tune of Nigerian law. Nigeria is such a huge player in the sub-region that should it get this right, the impact will reverberate across the continent. Come on, Nigeria, deal decisively with that lowlife conduct. Burnaboy's fame and success are a drop in the ocean compared to R. Kelly and Bill Cosby. Such arrant nonsense must stop!

The story says that he was with three women when he spotted another ‘married woman’ in the company of her husband. He told Inspector Ibrahim, one of his police escorts, to invite the ‘married woman’ to come join him. This gesture, they say, annoyed the lady’s husband, who lambasted him, saying that it was disrespectful for any man to make advances at a ‘married woman’. Yet, after some minutes, he made advances toward the ‘married woman’ again, a development they say infuriated her husband and his friends who had gathered at the club and the matter soon degenerated. During the heated moment, Inspector Ibrahim pulled out his service pistol and released fire multiple times, as the musician laughed aloud non-stop. This must be a demented mind, I’m sure.

He has a great talent and must accompany it with good character. Some Nigerian celebrities have vowed to impact Nigerian society negatively. From leaked sex tapes to fraudulent activities and now making advances at married women? The law must always deal with their excesses and push them to be positive models, not a bad influence on the little ones who aspire to great heights for themselves and the society at large...