LGBTQ billboard is affront to 1992 Constitution, pull it down or we destroy it — Sam George 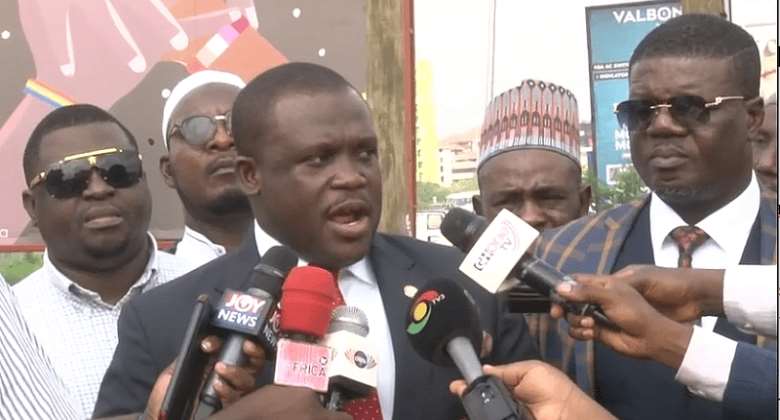 One of the sponsors of the anti-LGBTQ bill in Parliament, Samuel Nartey George has given the Police 24 hours to pull down a billboard said be advertising LGBTQ activities in Ghana.

The Ningo Prampram lawmaker said the bill board is an affront to the 1992 Constitution there if the Inspector General of Police fails to act , he and other citizens of this country will take action within the legal framework to destroy the bill board.

“As sponsors of the bill before Parliament and as Members of Parliament who represent the aspirations and will of the Ghanaian people, we have deemed it important to show up here today to register in the strongest term our displeasure, our discomfort and our abhorrence for unholy, uncultural and untraditional advertisement that has been put up on a very iconic road the N1, the Tema motorway.

“We are by this, calling on the Inspector General of Police Dr Akuffo Dampare to immediately, within the next twenty four hours, carry out the necessary security operations to ensure that this billboard, which is an affront to the 1992 Constitution is taken down in conjunction with the MCE for the area. Failure to take action, as citizens we will take action as enjoined by the Constitution to defend the Constitution,” he said while he and some lawmakers and anti-gay activist such as Moses Foh-Amoaning, visited the location of the billboard on Thursday June 9.

Meanwhile, the Minority in Parliament has expressed concerns over what they believe is an attempt to delay the passage of the anti-gay bill.

Asawase Member of Parliament, Muntaka Mubarak said on the floor of the House, Wednesday June 8 that until the anti-gay bay is passed, even if the government introduces a bill that seeks to bring water to the people of his constituents, the NDC MPs will oppose it.

Muntaka explained that since the anti-gay bill was introduced, several other bills have come to Parliament and passed by the House. He suspected a deliberate attempt not to approve the bill.

“So far, as this constitution is concerned when we introduce a bill in this house and it is before the committee that committee must not spend more than three months without coming to tell us reasons why it has to go beyond the three months.

“…Since this is a matter that the Chair of the Constitutional and Legal Affairs wants to use to delay that bill, that bill was in this house before several other bills, I can assure you that any other bill introduced in this house, we shall resist it. Even if it is to provide water in Asawase we will resist it.

“We will make sure that that bill, as long as it stays there no other bill passes through this house.”

The controversial bill divided opinion in the Ghanaian public discourse.

While some, particularly the religious and traditional groupings, supported the Bill and hopeful of its passing, others say it could incur the wrath of the international community against Ghana.

The bill is being promoted by Ningo Prampram lawmaker Samuel Nartey George and some of his colleague legislators.

Latest Photo Reports
Catch up with all the political quotes from our politicians.
Advertise here
More from Headlines
ModernGhana Links
[Video] We won’t vote for ‘goat’ branded NPP again — Angry Mamponteng residents tell ‘Boniaye Kai' Akufo-Addo
Ghanaians must be involved in the process of negotiations with IMF – Economist to gov’t
NPP will fail to 'break the 8' due to the behaviour of Akufo-Addo – Political Analyst
TOP STORIES

Ghanaians must be involved in the process of negotiations wi...
13 minutes ago