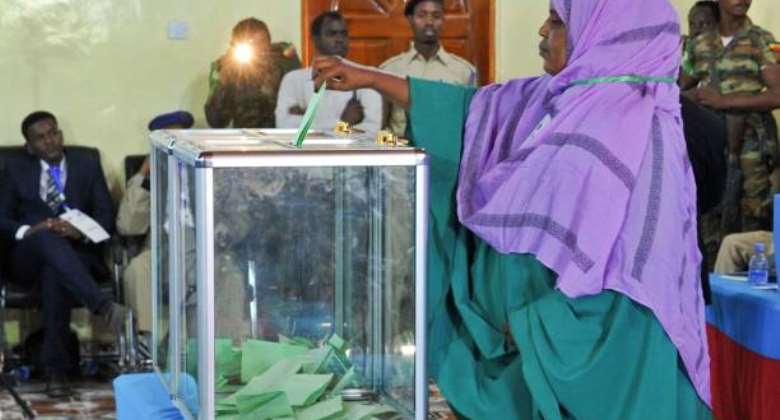 MOGADISHU-SOMALIA. Veteran politician figure, analysts see as pragmatic and moderate who served in the last two transitional federal governments has been elected as the new speaker of the 11th Parliament in Somalia. The federal laws have elected Sheikh Aden Mohamed Nor AKA Madobe as a new speaker in late Thursday

in an election marred by uncertainty and squabbling over controversial MPs separately elected from Gedo and who is in charge of the election security as well as the venue where the election will take place.

Over 250 parliamentarians took part in the election following several days of political turmoil in the country.Aden Madobe was among seven candidates vying for lower-House speakership election after the former speaker Mohamed Mursal Abdirahman withdrawn from the race with undisclosed motives.

The official names of the seven candidates in the race and the results they have gained for the first round. Hassan Abdinor 98. Aden Madobe 74. Abdullahi Black 33. Aden Saransor 23. Sharif Abdalla 13 Abdirashid Hidig 6. Sadik Abdullahi 5. Top four candidates go the second round.

Hassan Abdinor who was Villa Somalia's favoured candidate took the commanding lead in the round of the race by garnering 98 votes While Aden received 74 in the first round. Then the second round has been organized and two more candidates quit the race. Abdullahi Black and Aden Saransor.

Seven MPs were barred from voting due to their controversial eligibility criteria. 16 from Geso region and one from Hirshabelle. Multiple checkpoints were manned in and around the election venue and journalists do not have full access to the election rendezvous. But after long squabbling compromise has been reached which paved the way for the election to proceed.

It was thought and presumed that the election will be postponed due unfolding crisis and shooting spree outside the venue of the election and wrangling over who is in charge the security of the election venue and the safety MPs.

All MPs were summoned and convened to arrive the election venue on time at 10:00 am but very few have shown up casting doubt whether the election will take place today or not but late hours on Thursday, plethora of MPs have turned up the venue and broke their fast at the election venue due to the holy month of Ramadan that Muslims across the globe are observing.

Huge wind of change has blown up As we had been witnessed in the Arab Springs in 2011 which a lot of autocratic and repressive regimes were deposed remarkably Hosni Mubarak of Egypt, Muammer Gaddafi of Libyaand Zeinul Abadin Bin Ali of Tunisia. In the second and decisive round of the race.

Aden Madobe who previously served as speaker of parliament from Jan, 31 2007 to May 25, 2010 won with landslide votes of 163 after defeating lawmaker Hassan Abdinor in the second round. Hassan Abdinor who is widely seen as the candidate backed by the lameduck president and who is quite young compared to his rival and both hailed from South-west State.

In a statement posted on Twitter by the communication director of Villa Somalia Abdirashid Hashi presumed to be pre-written and premature congratulation to Villa Somalia's favoured candidate Hassan Abdinor was removed after it was widely circulated in Social media platforms and went viral that Twitter post was later rectified and apologized.

Statement issued by the outgoing president Farmajo congratulated Madobe and wish him well in the new role and responsibilities he assumed and vehemently inspired and recommended to discharge his national duties with diligence and according to the provisional federal constitution which was adopted in 2012 and still waiting to be accomplished through public referendum and signature of the president..

Somalia has seen political gridlock for more than a year over long-delayed elections that deeply polarized the country's political elites as well as the people and resulted complete breakdown of the relations between lameduck president and his caretaker PM Roble.

The election of lower-house speakership was on the verge to be postponed after president and Premier clashed publicly over election security procedures ahead of a planned parliamentary leadership vote in the capital. Caretaker PM Roble has issued statement authorizing the African Union forces to fully take control of the security at fortified Airport Compound where the vote was to take place

' I have authorized ATMIS ( African Union Transition Mission in Somalia) peacekeepers to immediately take over the security of the Airforce Hangar as we accomplish the elections of the parliamentary leadership and orchestrate presidential race next month ' he said.

Tit-for-tat game and recriminations gained momentum as president Farmajo fired back, saying the national security election committee which is chaired by General AbdiHassan Hijar, Somalia's police commander who narrowly survived a suicide bombing which took place a hotel in which he had a meeting with the federal lawmakers who hails from Sool, Sanaag and Ceyn will oversee the venue security as stipulated by NCC deal.

For safety and security reasons some of the Somalia's parliamentary proceedings take place inside the former airforce hangar at close proximity to Adden Adde International Airport and will host the vote for speakership of the influential 275- Members of lower chamber. It will also host the upcoming presidential election which has yet to be scheduled.

In Somalia's parliamentary elections which started in 2021, clan-based formula thousands of clan elders selected 275 members of parliament for the lower-house, while the senators from the upper-house were elected from five member states of State assemblies..Both chambers of Somalia's bicameral parliament then elect the next president.

' I urge the MPs to elect a Maverick and competent president who can preserve the interest, dignity and sovereignty of the nation, who is consensus- oriented and as well play neutral and peaceful role in Somalia's political sphere ' Says PM @MohamedHRoble. In his tweets.

Although the election of the majority of federal lawmakers have been settled, disp9has ensued over the election of 16 lawmakers representing Gedo an administrative region which comes under Jubbaland's jurisdiction.

FEIT has cited numerous security concerns, Somalia's election committee moved the venue for the parliamentary vote to resolve the much wrangled seats from the capital of Gedo region, Garbaharey and El-Wak to participate were the election Hot spots the Move was endorsed by Roble, but supporters of the president utterly repudiated the move and selected 16 MPs of their own to forestall the 16 lawmakers chosen from El-Wak.

Somalia's interim house speaker Abdisalan Dhabancad and Roble want the 16 MPs elected in El-wak to participate in the speakership and presidential elections but lameduck president Farmajo said controversial lawmakers elected in Gedo region's parallel elections should not be allowed to have an access to the election venue and participate let alone casting their votes until agreement based on consensus is reached.

Skirmishes and shooting preceded Tuesdays acrimonious dissension over who would provide security for the upcoming votes. Transitional house speaker Dhabancad reported that the police commander General Hijar denied him to have an access to the venue and deliberately obstructed the swearing in of El-Wak MPs at the Hangar on Monday.

He also cited when they moved the swearing-in ceremony to private hotel, security forces fired indiscriminately on the hotel that prompted PM Roble to warn General Hijar and director of the National intelligence and security agency Colonel Yasin whose agents were accused of the involvement in the shooting spree disrupting the election.

General Hijar utterly denied and refuted Dhabancad's accusations General Hijar also cited he wants to see the parliamentary leadership vote postponed for days, so that he can prepare and 100% guarantee for the security of the venue if his proposal is being ignored.

He could not guarantee security and safety of MPs on Wednesday, his reckless comments had infuriated the security Minister Abdullahi Mohamed Nor, a close ally of Roble who issued statement to suspend the police chief.

Meanwhile, the election for the leadership of the upper-house took place smoothly and peacefully and the security was guaranteed and maintained by Somali police forces on Tuesday dated 26, April 2022, Veteran lawmaker and long-serving senator Abdi Hashi Abdullahi had been re-elected to the post. He has been a fierce and vociferous critic of the incumbent president's policies. The election of speakers in the parliament and senate a fay earlier and are key steps in establishing the new government which must be in place by May 17, if Somalia is to continue receiving budget support and subsidy from International monetary Fund.

BRIEF BIOGRAPHY OF THE NEW SPEAKER IN THE FEDERAL PARLIAMENT OF SOMALIA.

Aden Madobe was born on 15 April 1956 and raised in Hudur, the capital of Bakol region of Somalia he belongs to Hadame subclan of Rahanweyn (Digil iyo Mirifle) who usually occupies the post of parliamentary speaker.

according to clan-based arrangement 4.5 in which four dominant clans were given equal share and minority clans were lumped together and given half of the number.

Popularly known as Aden Madobe is a prominent politician who hold various positions in the government, he previously served as the first deputy chairman of the Rahanweyn Resistance Army one of the factions of Somali civil war according to Aden Madobe beginning in 1996,

RRA accepted the assistance of Ethopia in training and arming of its troops in 2003, he temporarily split with his fellow RRA leaders Colonel Shatigaduud and Habsade though they later reconciled and both served as Minister in the transitional federal governments.

Before joining the newly-formed transitional federal government (TFG) also as justice Minister and speaker of transitional federal parliament in (2007-2010) Madobe briefly served as an acting president of Somalia in January 2014, he was appointed minister of industry and commerce.

On 31, January 2007 Madobe was elected speaker of transitional federal government (TFG) his predecessor at the position Sharif Hassan Sheikh Aden, who also became the first president of South-west state was voted out by the legislature on January 17, 2007 due to his alleged support for Islamic court Union (ICU) .

Madobe was later sworn into office on February 3, 2007. Madobe also served as acting TFG president after former president Abdullahi Yusuf resigned from office on 29 December 2008 on 31 January, 2009 Sharif Sheikh Ahmed was voted in as new president.

Aden Madobe's election was widely welcomed by the people and celebratory gunfire were heard across the country and expect to lead reconciliation process and launch policy of reform as soon as he officially assumes office.

Somalia's political party system is in infancy or embryonic stage this doesn't necessarily mean the opposition will carry the day but they now fully dominate both chambers of parliament said Rashid Abdi, Chief analyst at Sahan research, Nairobi-based Think-tank the chance of Farmajo's re-election and becoming the next president is fading and getting dimmer and slimmer day after day.

AUTHOR: Holds BA in English Language and literature at Mogadishu University and BA in Business administration at Simad University. Master of arts in applied Linguistics at Kisii University in Nairobi as well as Master of peace and conflict studies at Uppsala University in Sweden.