Mahama's Hammar: What A Fine Mess 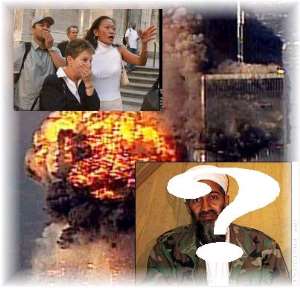 What began as unified global horror and consensus against terrorism after the terrifying images of commercial jetliners crashing into the World Trade Centre building were splashed across the world screens has in a matter of 2 years resulted in doubt and even downright opposition to the role of the US in Iraq. How the Bush Administration in such a short period managed to squander the enormous global goodwill it set out with in the war against terror is a question historians and political analysts will argue over for the next several decades.

Following 9/11 all right thinking people across the world were solidly in support of effective action being taken against Osama Bin Laden and his Al-Qaeda Movement. The invasion of Afghanistan, the removal of the extremist Taliban Government and the destruction of Al-Qaeda training camps in that country received widespread support across the world.

The strikes against Afghanistan had Bin Laden and his supporters on the run. Many governments including those of Arab countries were on the look out for Al-Qaeda operatives and were happy to hand them over to the US when arrested. The world turned a blind eye to the suspension of prisoner rights in the US detention facilities at Guatanamo because it was believed that it was in the interest of the fight against terror to restrict some of those rights.

Riding on a wave of patriotism and nationalism engendered by Bin Laden's mad cap scheme of crashing planes into the WTC Building, President Bush saw his approval rating soar to all time highs above 70%. Emerging from controversial elections of 2000 as a bit of a lame duck president, Bush's confidence was significantly boosted by these developments. Indeed many were those in the new administration who believed strongly that the election of 2004 was already in the bag on the strength of foreign policy alone.

Emboldened by such national and global support, President Bush made what I still believe is the gravest mistake of his political career. The unilateral decision to invade Iraq without the requisite support of the United Nations is a matter he will rue till the end of his days. International pressure especially from the US had made Saddam Hussein acquiesce to receiving international weapons inspectors again. The Chief Weapons Inspector Hans Blix had told the UN that he needed another month to come out with a conclusive report as to whether Iraq was developing weapons of mass destruction (WMDs) or not. The Bush administration declined this one-month holdup and instead hammered together its own coalition and commenced the march on Baghdad.

Consensus of the UN would have given international legitimacy to the whole exercise. It would have relieved America of the heavy burden she now has to carry in post-war Iraq.

It would appear that while the Bush administration had an excellent plan for the invasion and prosecution of the war against Saddam, it did not have an equally well laid out plan for re-establishing a peaceful democratic Iraq and for disengagement. While things went very well and according to plan during the war, things have not been quite the same since Bush declared “Mission Accomplished” aboard the MSS Missouri more than a year ago. Significant numbers of flag-draped coffins arriving in the US from Iraq everyday have began to sow seeds of doubt in the minds of ordinary Americans whether this Iraqi adventure was worth it after all. The failure to find weapons of mass destruction or credible evidence that Iraq was in collaboration with Al-Qaeda and posed an imminent threat to the peace and safety of America and her allies has worsened public opinion not only against the Bush administration, but also against other governments that joined in the Iraqi invasion.

Like a carefully choreographed dance all gone wrong, the human rights record of the Saddam dictatorship that is now cited as the main benefit for his ouster, has began to grow cold in the face of likely widespread prisoner abuse and even torture being exposed in Iraqi prisons under US administration. Many photos mainly from the Abu Ghraib detention facility and a report by the US General Taguba detail possible widespread instances of prisoner abuse in US detention facilities. These photos have shocked the world and especially the Arab nations and strongly turned public opinion against the US. Photos of nude Iraqi detainees in various poses of humiliation superintended by a gloating Pte. England broadcast to Arab viewers who have such stringent views of sexual privacy and male pride have done such irreparable damage to US foreign relations that the effects will be felt for decades to come. Indeed if one were to ask whether the Iraq adventure has advanced the fight against terrorism, I daresay the answer is No! Unlike Afghanistan where the removal of the Taliban Government and the destruction of Al-Qaeda training camps destroyed the main hornets nest for Bin Laden and his operatives, Iraq on the contrary has become a rallying point for Al-Qaeda terrorists and all manner of Islamic fundamentalist flocking to the standard to fight what they deem to be the “devil itself” the United States.

America's grave blunders in Iraq are giving fillip to Bin Laden and other misguided terrorists to glorify their dastardly deeds and attract the sympathy of a growing Arab population that is steadily being alienated by Bush's misadventure in Iraq. The macabre video of the beheading of a US contractor and the killing of the head of the Iraqi Governing Council are all continuing landmarks in and adventure gone awry. Osama Bin Laden is still at large and his organization has proved capable of striking strategically as they did in Madrid shortly before the elections and thus dislodging the pro-American Government there. This brought the desired effect of a Spanish withdrawal from the Iraqi coalition.

Senator Ted Kennedy in a sharp critique declared Iraq to be Bush's Vietnam. Republican ideologues were quick in their ripostes to Kennedy's analogy and took great exception to it. Whatever it is, whether Vietnam or Iraq or Afghanistan, it appears the Bush administration has landed the United States in one fine mess. The writer is an MP and the Minority Spokesman on Communications Views expressed by the author(s) do not necessarily reflect those of GhanaHomePage.