Thoughts Of A Nima Boy: Naima Sherif Discusses ‘the Alchemist.’ 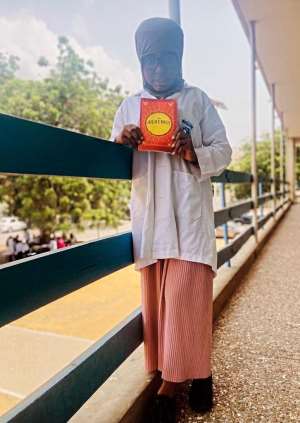 The year 2022 has been a really engaging one for me so far such that I struggle to find time to do what I love the most, writing. I love to read and anybody who loves to read so much will most likely love to write too, to share ideas, to give life to words. “When things are written”, Benjamin Disraeli, the former British Prime Minister believes “they have a lifetime of their own.” So, I really love to write.

I have a lot of things to share after holidaying in eight states in the United States of America. I took up notes germane to what has come to define my life; the fight against illiteracy and ignorance in our setting. I have seen how a people have embraced knowledge which is cardinal in their commerce that has translated into what they rule the world with, industry. But that is a discussion for another time.

This year, I want us to do more book discussions and reviews in our column. Much gratitude goes to the editor of the Business and Financial Times, his team and wonderful readers for giving space to reading and writing in a country that begs for literacy and comprehension. This is one of the few media platforms where books are highlighted and discussed. Thank you once more.

I want us to start the column this year with a discussion of a book by a young enterprising lady who studies Science Laboratory Technology at the Accra Technical University. She discusses the book written by the Brazilian writer, Paolo Coelho who decided to write a book that was in his soul in two weeks. Published in 1988, It is a widely-read book, translated into several languages and one of the best sellers in contemporary times. It is a great book and should be in every home. In order not to take the wind out of the sails of Naima, I leave her to do her discussion.

I came across The Alchemist by Paulo Coelho in February 2021. I had resolved to cultivate a strong reading habit, so I joined Success Book Club and subsequently went through their Facebook page to familiarize myself with their activities and books they have read so far. I saw a tall list of books with very interesting titles but the title that whipped up my curiosity is The Alchemist. I got attracted to it because I thought it had something to do with a scientific content because of my academic background. I placed order for it, and it got delivered to me with two other books. Contrary to what I thought, the book is a story full of magic and wisdom and makes one understand herself more and the essential facts of life.

It’s a book full of Inspiration, wisdom and the pages are laden with dreams and treasures that we chase very far and elsewhere which are unknowingly right at our doorsteps. It is a beautiful story about a young dreamer (a shepherd boy) in pursuit of his personal legend. In a quest to fine his treasure, he set out on a journey dreaming of a beautiful or magical place. At the end of his journey, he realizes the treasure was with him the entire time. The book describes personal legends as what we always want to accomplish. “Everyone, when young, knows what their personal legend is. At a point in their lives, everything is clear, and everything is possible. They are not afraid to dream and yearn for everything they would like to see happen to them in their lives. But, as time passes, a mysterious force begins to convince them that it will be impossible for them to realize their personal legend.”

The book heavily discusses how the human heart easily fears. There is only one thing that makes a dream impossible to achieve. And that is the fear of failure. People are afraid to pursue their most important dreams because they feel that they don’t deserve them, or that they will be unable to achieve them. One must have no fear of failure in order to succeed. Fear I believe is a traitor which most often make us not to try what we might have achieved if we did. Thus “tell your heart that the fear of suffering is worse than the suffering itself.

And that no heart has ever suffered when it goes in search of its dreams, because every second of the search is a second encounter with God and with eternity.” People need not to fear the unknown if they can achieve what they need and want. “We are afraid of losing what we have, whether it’s our life or our possessions and property. But this fear evaporates when we understand that our life stories and history of the world were written by the same hand.

The book also teaches that decision-making begins the process of human achievement. When one makes a decision, he is really diving into a strong current that will carry him to places he had never dreamed of when he first made the decision.

When the young dreamer decided to seek out his treasure, he never imagined that he would wind up as a shepherd, work in a crystal shop, find the woman of his life and meet an English man who was also in search of his personal legend. And it follows through with an interaction between them. “Everything in life is an omen,” said the English man. “There is a universal language, understood by everybody, but already forgotten. I’m in search of that universal language, among other things. I must find the man who knows the universal language. An alchemist.” Here we should understand the word ‘Luck and coincidence.’ It’s with those words that the universal language is written. “It is a mysterious chain that links one thing to another, the same chain that had caused the boy to become a shepherd, caused his recurring dream, that brought him to a city near Africa, to find a king, and to be robbed in order to meet a crystal merchant and follow through to reach his intended destination. The universal language is a sudden immersion of the soul into the universal current life, where the histories of all people are connected, and we can know everything, because it’s all written there.

The English man asked the boy if he too, was in search for the alchemist. “I’m looking for a treasure said the boy.” I don’t even know what the Alchemy is.”

Through his journey, he read the books of the English man. They were strange books. They spoke about mercury, salt, dragons and kings, and he didn’t understand any of it. But there was one idea that seemed to repeat itself throughout all the books; all things are the manifestation of one thing only.

In one of the books, he learned that the most important text in a literature of alchemy contained only a few lines and had been inscribed on the surface of an Emerald. Why do you need all these books? The boy asked. “So that we can understand those few lines’” the Englishman answered without appearing really to believe what he had said. The book that most enthralled the boy had to do with the stories of the most famous alchemists. They were men who had dedicated their entire lives to the purification of metals in the laboratories. They believed that, if a metal were heated for many years, it would free itself of all its individual properties, and what was left would be the soul of the world. This soul of the world allowed them to understand anything on the face of the earth, because it was the language with which all things communicated. They called that discovery “the master work”; t was part liquid and part solid.

Can’t you just observe men and omens in order to understand the language? The boy asked. “You have a mania for simplifying everything,” answered the Englishman, irritated. “Alchemy is a serious discipline. Every step has to be followed exactly as it was followed by the master.” The boy learned that the liquid part of the master work was called the Elixir of life, and that it cured all illnesses. It always kept the Alchemist from growing old. And the solid part was called the philosopher’s stone.

It’s not easy to fine philosopher’s stone, said the Englishman. Also, “the philosopher’s stone has a fascinating property. A small silver of the stone can transform large quantities of metal into gold.” Having heard that, the boy became even more interested in alchemy. He thought that, with patience, he’d be able to transform everything into gold. He read the lives of the various people who had succeeded in doing so: Helvetius, Elias, Fulcanelli, and Geber. They were fascinating stories: each of them lived their personal legend to the end.

The book teaches that when you really want something, the whole universe conspires to help you. It also teaches that when we strive to become better than we are, everything around us becomes better too. It also makes a strong point that anyone who interferes with the personal legend of another thing will never discover his own. The book placates the soul of anyone struggling in life that he should keep on. It emphasizes the fact that the darkest hour of the night always comes before the dawn and that no project is completed until its objectives have been Achieved. The book is so heavy on love and underscores the point that love would never keep a man from his Personal Legend sand that one must fall in love and really know a person before becoming committed. In conclusion, Paulo Coelho once said that following your dream is like learning a foreign language; you will make mistakes, but you will get there in the end.

NB: The Writer is a Community Organizer, Reader and a Student of Knowledge.