Economic Freedom Fighters of Ghana statement on the criminal E- levy and other unfolding events in our body polity. 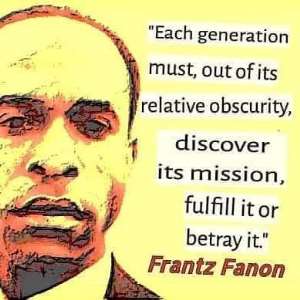 This government of Nana addo would be tempted to rob Ghanaians at gun point to satisfy their elephantine interest should this plundering monster called the E levy sees an impasse by parliament. We are in wreck times of a bad and caustic economy that even the government who received abrupt enormous funds from IMF and the world bank amounting over $2.1 billion dollars plus internally generated capital from taxes and foreign exchange from Gold, diamond,bauxite, Agriculture and oil is craving for more from the impoverished masses rended and desolated by covid 19 as a result of incompetent fiscal management and the Economy.

Dept to GDP hitting 83% is not originated from covid but from the incompetence and super corrupt nana Akuffo and his serpent government sodomizing the country.

Forcing E- levy on our necks is like an albatross cross ready to ransack lives. This levy cannot salvage the predicament we are plundered by misleaders. E- Ievy would impoverish the vulnerable masses to destitute and should not see the light of the day. Supercilious conjugated mediocrity and incompetence is what has brought us here in a mire where E levy is the solution equation but it can't save us from been swallowed by the Economic constraints caused by the poor leadership of this country.

E- Levy is criminal tax and damn exploitative of it's form. We are against everything criminal and exploitative . E- Levy can't leverage our economy after oil, gold, diamond and multi billion dollars of borrowed money failed under Akuffo Addo misleadership.

If it is the e - levy that can fuel the elephantine government of Akuffo Addo for running an extremely extravagant, needless and absurd government then Ghanaians have unanimously rejected the e-levy, this is owing to the fact that we are witnessing aClass struggle were the rich elites in Akuffo government is fighting to remain rich and powerful forever and they careless about the poor Ghanaians who voted them to office.

Frantz Fanon once said "The unpreparedness of the educated classes, the lack of practical links between them and the mass of the people, their laziness, and, let it be said, their cowardice at the decisive moment of the struggle will give rise to tragic mishaps.”

Is this the same hypocrites who wept over hardships few years ago. Does these NPP sycophants think as patriotic citizen. Do they think like we have vulnerable people in this country. What evil is so serious than E - levy after looting all the elephantine sized borrowed money in the world plus the inordinate taxes extorted from poor citizens.

Today, thinking about the Ghanaians is a sin . These criminals can't be trusted for a bit.

"For how long will society hate people who are awaken. People who are awaken are threat to Capitalist and imperialist mentality. The power of their intellectual radicality intimidates and subverts the greed and exploitative minds of the capitalist". If we resist oppression and choose Freedom we are not anarchist we are Fighters and cadres of 'FREEDOM' and 'JUSTICE' We are promoting equality in society, that is freedom for all irrespective of class and tribe".

We must not remain silent in this country over delicate issues such as freedoms , Justice and the oppression of the masses especially labor and those in the working class.

If China can exploit our resources and transform their citizens and country what nonsense is it that we cant transform our small country with the mineral deposits we are endowed. We need to change our political system and eleminate all corrupt systems and leaders by any reasonable means and put replace them with patriotic Ghanaians to build a strong and economic free state. We want a happy generation not the sad one of today.

A willing citizens is what we look forward to, citizens that are law abiding and will contribute their quota to nations building.

We need a transformed laws thst is legible to enforce and bring everyone to book including the manufacturers of the law but not criminals that will manipulate the laws in their favour.

A transformed natural and human resources that all will benefit from.

Let us stand firm to resist the oppression of dictatorship of misleaders.

External factors stripped off gains Akufo-Addo gov’t made in...
53 minutes ago