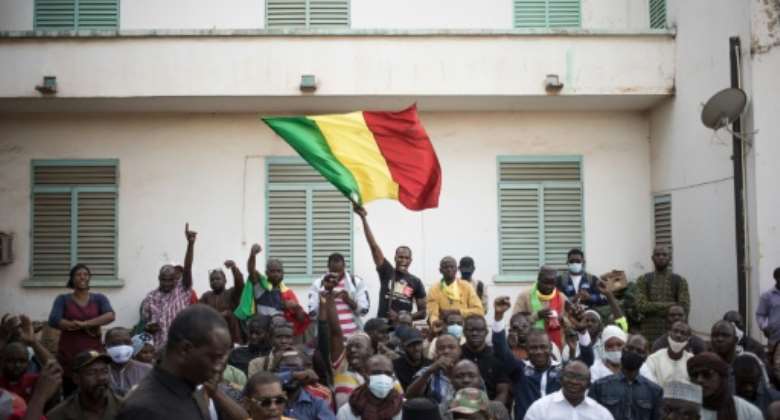 People in Bamako protest against newly imposed sanctions against Mali over the junta's delaying of promised elections. By FLORENT VERGNES AFPFile

Pressure on Mali's junta increased Tuesday as France and the United States underlined their support for the West African bloc ECOWAS, which has slapped sanctions on the country over delayed elections following two coups.

In a sharp escalation after months of diplomatic tensions, leaders from the Economic Community of West African States (ECOWAS) on Sunday agreed to shutter borders with the Sahel state and impose a trade embargo.

The move came after Mali's interim government last month proposed staying in power for up to five years before staging elections -- despite international demands that it respect a promise to hold elections on February 27.

As well as shutting borders and imposing a trade embargo, ECOWAS also agreed to halt financial aid to Mali and freeze its assets at the Central Bank of West African States.

Mali's junta has condemned the measures, and urged Malians to stage nationwide demonstrations against them on Friday.

"We are in complete solidarity with the region and with this very courageous and clear stance" by ECOWAS, French President Emmanuel Macron told reporters on Tuesday.

He added that the EU would seek to strengthen sanctions on the junta.

Separately, French Foreign Minister Jean-Yves Le Drian accused mercenaries from the Russian Wagner group of "supporting" the junta under the guise of fighting a jihadist insurgency.

"What is happening in Mali is a headlong rush by the... junta which, in defiance of its commitments, hopes to hijack power for years and deprive the Malian people of their democratic choices," he added.

Washington also supported the "strong actions" by ECOWAS and urged the Mali regime to honour its pledge to return to democracy, said the US ambassador to the United Nations Linda Thomas-Greenfield.

"A five-year transition is not in their interest and extends the pain of the people," she told a Security Council meeting.

The presidency of Algeria, which shares a long border with Mali, also called on the junta to negotiate with ECOWAS and "reach a plan to end the crisis, taking into account international demands and the legitimate demands of the Malian people".

The country's strongman Colonel Assimi Goita, in an address late Monday, called the sanctions "illegitimate, illegal and inhumane", although he added that he remains open to dialogue with Mali's West African neighbours.

The latest political crisis caps a period of steadily deteriorating relations between Mali and its neighbours and partners, which began after Goita led a coup in August 2020 that toppled president Ibrahim Boubacar Keita.

But the strongman staged a de facto second coup in May 2021, forcing out an interim civilian government and disrupting the timetable to restore democracy.

Then in December, his government proposed staying in power for up to an additional five years.

It argued, among other reasons, that rampant insecurity in Mali prevents it from staging safe elections according to the agreed timetable.

The vast nation of 19 million people is in the grip of a jihadist insurgency, and swathes of territory are outside government control.

'Lack of political will'

Goita has called for calm and "resilience" in the face of the ECOWAS sanctions and has assured Malians that the government will take steps to counter their effects.

Landlocked Mali is one of the poorest countries in the world.

The sanctions appear to have angered many in Mali, where pro-government messages, as well as criticisms of ECOWAS, have flooded social media.

However, offering a rare rebuke of the junta, a group of about a dozen Malian political parties said Tuesday that the military held sole responsibility for the sanctions.

"These sanctions are the result of a lack of political will on the part of the authorities to respect their commitments," the parties said.

'Parties must have functioning offices, file their accounts ...
12 minutes ago