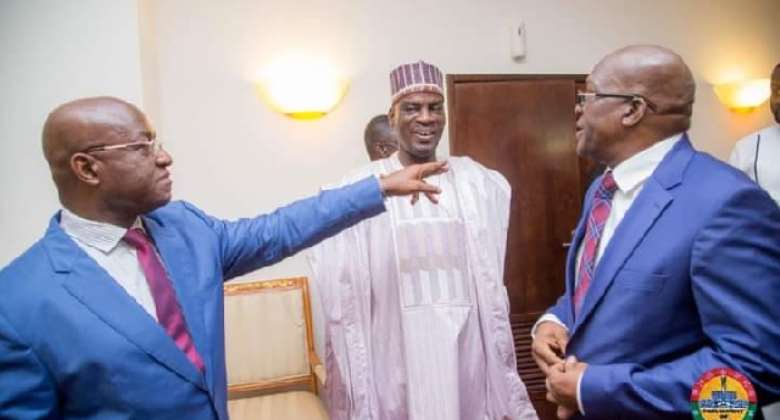 The Parliamentary Service has said Majority Leader Osei Kyei-Mensah-Bonsu got it wrong when he said Speaker Alban Bagbin threatened to reject the 2022 budget if the government did not allocate some GHS1.72 billion to the House for next year.

“This is a complete misrepresentation of what transpired at the meeting. It is not the duty of the Speaker to reject or approve budgets. Approval or rejection is determined only by Members of Parliament”, the statement said.

At a press conference on Thursday, 23 December 2021, Mr Kyei-Mensah-Bonsu said not only was the Speaker’s absence from parliament on Monday night to consider the e-levy bill payback time for the ‘sins’ of Finance Minister Ken Ofori-Atta’s father, Mr Akwasi Andrews Jones Amoako Atta Ofori Atta, who led parliament, several decades ago, to reject one of the budgets of President Dr Hilla Limann, but also a manifestation of an earlier threat by the former Nadowli Kaleo MP to make sure the 2022 budget was rejected if Mr Ofori-Atta did not allocate two per cent of the country’s revenue to the legislature.

There’s been a stalemate over the budget, particularly concerning the proposed 1.75 per cent e-levy.

It led to a free-for-all brawl on the floor of parliament on Monday as the House voted on the bill.

The Suame MP told journalists later that the Speaker said he “didn’t want to remind Finance Minister Ken Ofori-Atta of what his [Ken’s] own father did to President Hilla Limann. That was the Speaker”.

“So, all that is playing out, is it to satisfy what the Speaker indicated at the very beginning of the presentation of the budget? That; this budget, he will make sure the budget is rejected? Is that the case?” he asked.

Mr Kyei-Mensah-Bonsu said the “people of this country ought to know the mindset of this Speaker with respect to this budget? So, all this playing out, really, and that is why he sits and elects to leave the chamber, to create problems".

The Majority Leader said: “I told you that some clergymen, the queen of Christendom in the country, have met me. I’m not going to speak for any long time but the people of this country should know what is leading all of us into this crisis”.

On the Speaker’s demand for two per cent of the national revenue for parliament, Mr Kyei-Mensah-Bonsu said: “GHS1.72 billion for what?”

“He [Bagbin] says that he has information that the total revenue of this country was going to be GHS89 billion and that the finance minister should give him 2 per cent of it and that works to GHS1.72 billion”.

“If he [Finance Minister] doesn’t give parliament GHS1.72 billion, then his budget is going to be thrown out; he [Bagbin] was going to make sure that the budget was rejected”.

“Is that where we are going as a country?” he wondered.

“I’m hoping that this period that we have – between now and the 18th of January, we’ll be able to get to the bottom of this and rally together as one people in one country with a common destiny and not submit to the whims and caprices of just one individual”, Mr Kyei-Mensah-Bonsu said.

Breaking his silence on the matter, Mr Bagbin told a forum of former MPs on the same day that he cannot be blamed for the failures of the Majority Caucus.

“Now, they say I refused to preside and that is why some numbers were not in the house. I am not a Chief Whip of any of the caucuses in the house and I am also not entitled to bring members to the house. That is not my duty.”

“I am to preside and apply the rules and I have applied them fairly, according to my understanding, through literature and experience and I am not even sure that the members listened to what I read that day about the rules.”