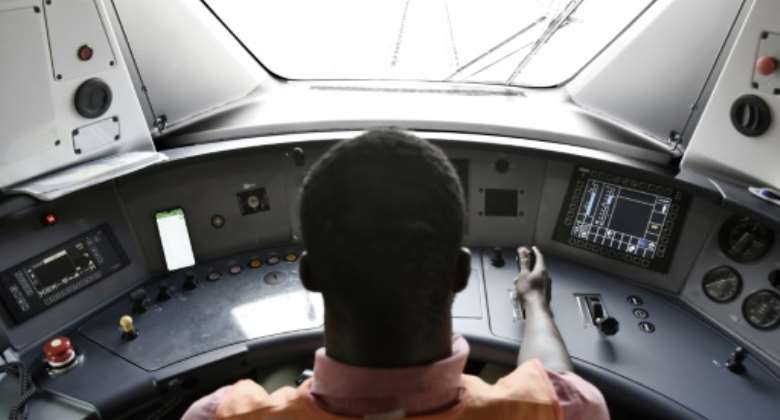 Let the train take the strain: Driver Momar Diop Sidibe in one of Dakar's brand-new commuter locomotives. By SEYLLOU (AFP)

After five years' work and at a cost of more than a billion dollars, Senegal's capital city next Monday will finally welcome a new commuter railway line.

Politicians are lining up to extol the benefits of slashing journey times and decongesting Dakar once the gleaming TER regional express trains start to roll.

But thousands of residents claim they have not been properly compensated for homes and businesses that were demolished to make way for the much-trumpeted line.

The TER aims to carry 115,000 people between central Dakar and the city suburbs -- a journey that for many workers is blighted by traffic jams. By SEYLLOU (AFP)

"We plan to block the start of the TER on the day of the inauguration to demand satisfaction for our grievances," said Ibrahima Cisse, who leads a group of some 16,000 people who say they are owed money.

Many are also furious that the rehousing they were promised has not yet been completed.

The government says that almost everyone who is owed compensation has received it, but accepts that some resettlements have not yet happened.

Travelling at up 160 kilometres (100 miles) per hour, the trains will ply the 36-kilometre (22-mile) route between Dakar and the new city of Diamniadio in about 20 minutes.

The TER aims to carry 115,000 people between central Dakar and the city suburbs -- a journey that for many workers is blighted by traffic jams. By Tupac POINTU (AFP)

Supporters of the project say it will carry 115,000 people per day, saving them hours otherwise spent in the capital's monstrous traffic jams.

The time it took to build "may seem long, but we have broken records for the speed of construction, and despite Covid," Stephane Volant of Seter, the railway's operating company, told AFP.

Critics say the true cost of the project is more than a thousand trillion CFA francs ($1.7 billion 1.5 billion euros), compared with its budget of 780 billion francs.

Seter will use 15 four-car dual-mode trains with diesel and electric power, built by Alstom, one of several French companies, including Seter, that have had a leading role in the project.

The railway line, which is owned by the Senegalese state, is a centre piece of President Macky Sall's plan to overhaul the nation's infrastructure by 2035.

The TER has been dogged by claims of insufficient compensation from thousands of people whose homes or business were expropriated to build the line. By SEYLLOU (AFP)

Improving the situation in Dakar is one of Sall's pet themes.

The city's five million inhabitants make up almost one-third of Senegal's population and account for nearly all of the country's economic activity.

Traffic jams cost the city the equivalent of $172 million per year, according to official figures.

The TER stations will hook up with express buses which will operate on reserved lanes on a toll highway that has been operating for the last decade.

In the project's second phase, the line will be extended another 19 kms to the Blaise Diagne International Airport, which opened in 2017. Travel time to downtown Dakar from the airport would take less than 50 minutes.

Behind these impressive figures, those battling for compensation say their lives have been wrecked by the train line.

"The TER has impoverished us. It's a project that has created the living dead," said Amina Bayo, a member of Cisse's campaign group, called the Collective of People Affected by the TER.

Some 2,000 individuals and businesses have filed complaints with Apix, the state-owned agency that has overseen the project, claiming 50 billion CFA francs ($86 million/76 million euros).

They say that in many cases, assessors badly under-valued their property.

But Yatma Dieye of Apix told AFP that "98.8 percent of people affected by the project have been compensated."

Workers at the TER control centre in Colobane. The system has undergone weeks of testing ahead of Monday's inauguration. By SEYLLOU (AFP)

"Payments began in February 2017. Everything was transparent and done according to international standards," he said.

But he conceded that the state was "still working" on resettlement, a point that can be seen clearly in one Dakar suburb intended to house the evicted.

Unfinished market stalls with electric wires hanging down to the ground sit in a stretch of weeds near a disused lot close to a motorway.

"The construction site was supposed to be completed in April 2018 for more than 2,000 evicted traders," said one of them, Ngagne Amar.

Dieye said much of the evidence received by Apix "was generally weak."