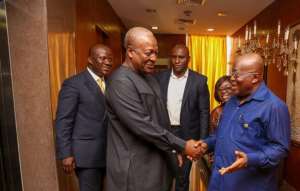 Presidential candidate of the National Democratic Congress (NDC) in the 2020 general elections, Mr. John Dramani Mahama has emphasised that at no point did President Akufo-Addo seek his intervention on the Electronic Transaction Levy (E-Levy) impasse.

There has been a standoff between the two major political parties in the country since Finance Minister Ken Ofori-Atta announced on November 17, 2021, plans by the government to introduce an Electronic Transaction Levy.

The Minority and Majority Caucuses have clashed several times over the levy leaving the fate of the 2022 budget in the balance.

After learning of speculations that he has been consulted by President Akufo-Addo on the matter, ex-President John Dramani Mahama says there is no truth in that.

Although he confirms having had a meeting with NPP stalwart Mr. Gabby Otchere Darko, the former President notes in a Facebook post that “At no time was there any discussion specifically about the President requiring my intervention in the impasse on the E-levy.”

Mr. Mahama explains that the issue discussed was the desire of Ghanaians to see the two major political parties working together for the interest of the nation.

According to him, he also discussed with Mr. Darko how dialogue can be deployed to ensure Parliamentary issues are agreed consensually before coming on the floor to avoid what happened recently in the House.