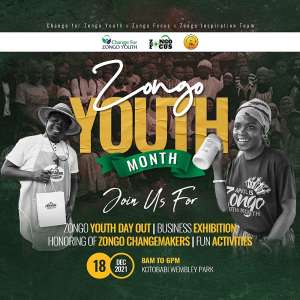 Ibrahim, a Global citizen, Policy analyst and an Arctic advocate gives us an interesting comparison of his dad with President Akufo-Addo. Not to take the wind out of his sails, take a read.

“President Akufo-Addo is just 2 years younger to my father. My dad put himself through school at the age of 19 getting house tutelage from his Christian Zongo Childhood friend- Victor Boye until he passed an entrance exam to class 5 and then move on to complete his middle school. My dad was one of only 3 from the whole of Nima-441 “Muslim students” in school in the 1960s.

A Zongo boy who was already a” master” in tailoring will later become the School Prefect at New Era Middle School around Korle Lagoon. He tells me how he often shaved his beard and moustache in order to conceal what we will call in modern times the “grand father of the class”.

In all these, he had tenacity, resolve and an unwavering conviction in education.

My dad had two challenges after middle school. Pressure from home as he was seen as

spending too much time on his books to the neglect of bringing income home through his tailoring and the fear that school might convert him into Christianity. The second was the fact that despite his pass from form 4, he could not enroll into the nursing school he wanted because of corruption and the syndrome of “whom you know”. Here you had, an enthusiastic young man who wanted to make a difference but he could not do so because of his environment and bad faith from corrupt individuals.

Meanwhile his contemporary President Akufo-Addo (and other big men kids), got chauffeured to school, while my dad walked to Korle Lagoon area. Akufo-Addo was flown to London to take his A-Levels and later became a lawyer whiles my dad had to find his way to Libya to seek ‘greener pastures and Islamic Education.

Can anyone mention to me so I can get “Ashamed” of any 75-year-old Zongo man they know of as a lawyer, or doctor, or Architect or a Nurse or whatever profession you can think of. Of course, there were tailors as my dad was one of them, there were masons doing patch work but what impact did they have on their community and their children. They did their best to provide food for their families and majority of them sought greener pastures in Libya, Kuwait, Algeria and Saudi Arabia.

My father loves education. He will later realize the importance of his “little education” when he found himself in Libya struggling for the betterment of his family. He got a job with Total in Libya and with both Arabic and English, got a job as a messenger when his other colleagues where he was doing menial jobs. He blended so well with the expats who could interact with him in English without stress whiles at the same time giving them meanings of things from Arabic to English. (Will continue this story another time).” Let’s take a pause to deeply soak that.

Now, Ibrahim, a boy with this background, started school in Nima-441, a slum of despair. Moved to Accra High School and then to the University of Ghana. From there, he worked as a Salesman with FedEx and then moved to Norway. He’s now a Research fellow at UiT The Arctic University of Norway. A remarkable feat, a tour de force, as the Latin will say. Is it not fair and valid for us to celebrate Ibrahim? I personally believe we need to celebrate him. Nkrumah says “those who would judge us merely by the heights we have achieved would do well to remember the depths from which we started.” Solid. And my grandfather Chinua Achebe added that “the lizard that jumped from the high Iroko tree to the ground says it will praise itself if no one else does.” I therefore wholeheartedly support the initiative by the Change for Zongo Youth to bring to fore, many of Ibrahim’s kind from the Zongo who are making impact in their communities across Ghana by trumpeting their activities and achievements to the world.

The situation in the Zongo communities in Ghana has been dire since Ghana’s independence These are communities that have a poor showing in terms of education, infrastructural development and friendly environment for the growth of responsible citizens. And this has culminated in many of the youth taking up to all sorts of iniquity and crime. However, from this same communities, there are young men and women who believe it should not be so. They believe education is the passport to a better future. They believe education is a way to a meaningful life and a wonderful legacy. They believe education can turn the narration of their communities and produce a generation that would be in the words of Barack Obama in his A Promised Land " generally impressive young men and women who..." will grow up " with the justifiable conviction that they were destined to lead lives of consequence." They believe this will be the walk that Bob Marley says will spark the millions of children in these communities to follow suit. It will inspire them to be enlightened. An enlightened citizenry they say “is an empowered citizenry.” They believe, education coupled with industry and commerce moves the world.

On Saturday, 18th December,2021, a historic event will take place at the Kotobabi Wembley Park. The historicity of the event lies in the fact that the youth-engineered initiative is geared towards preventing the youth of Zongo from becoming victims of circumstances just like our father we talked about in the opening sentences. Our elders did not do enough to place us on a very good footing in the national development agenda. The youth of the Zongo are awake now. Three organizations have come together to organize the Zongo Youth Day Out. These organizations are Change for Zongo Youth, Zongo Focus and Zongo Inspiration Team; three organizations that are working assiduously to turn the situation in the Zongo for the better.

The day will be characterized by various events such as Business Exhibition which is to expose young Zongo businesses to potential clients and investors. This is done through an open market, where various Zongo businesses represent their brands and exhibit their products and services. The event also provides a platform for networking, as well as honoring change makers among Zongo youth. There will also be a Study Abroad Desk: which will be an extension of the ongoing awareness creation on available opportunities for youth to study abroad in the USA, Canada, Europe and other places in the world. This will be in partnership with Education USA Center. There is going to be a forum which will be an interactive session during the business exhibition led by a facilitator who would lead the group to deliberate on the theme and possible ways of achieving it. The day will also be used to honor young change-makers in the Zongo communities who will be celebrated and presented with citations for their efforts and achievements in their various fields of endeavor. These Change-makers will each be tasked with mentoring at least one Zongo boy or girl to reach his or her full potentialities. The climax will be the honoring of the Zongo persons of the year for their diligence and exceptional achievements over the year.

The Zongo story is a story of resilience and community amidst overwhelming challenges.

This, however humble, will inspire our people to wake up and work towards securing a reputable status in this country. It should be embraced by all with who have Zongo at heart. The Change for Zongo Youth initiative is not for a specific group of people in the Zongo. It is for all. It is for a people awakening, arising and understanding that it has been too long in ‘slavery”.

See you on Saturday.

NB: The Writer is a Youth-Activist and a Student of Knowledge.

Let's go on our knees and pray for Akufo-Addo for God's inte...
18 minutes ago

NDC race: I will retain my seat and help bring Mahama back t...
28 minutes ago