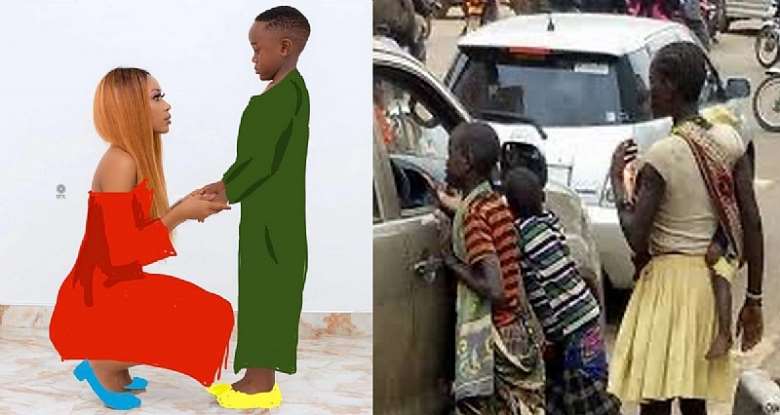 I speak for the Arts and you can call me bias and I wouldn’t mind especially in a whimsical and capricious way environment.

We’ve seen a politician in this country pull out a GUN in public, FIRE warning Shots and admit on radio to not just brandishing the GUN but shooting in public and yet NOTHING absolutely NOTHING happened to her and we’ve seen how one of our own brandished a gun in his private car on video and how he was arrested, remanded into prison custody and now in court.

My Issue this morning has to do with the CHILDREN on the STREETS that our Government and his Child right activists refuses to see but are quick to Prosecute and Jail Akueapem Polo for exposing her Child on social media.

I’m not saying Polo shouldn’t be punished for her sins if any BUT I’m saying the same energy that the Government and it’s Child Rights activists used in Jailing her should be used in Jailing the Parents of these children on our streets begging for monies of which some are even younger than Akueapem Polo’s son.

These street children are basically put on our streets to beg for arms to feed their families so they’re not just been endangered by being on the streets but are also being used for labor which is CHILD LABOR not in our villages on our cocoa farms but on our STREETS where the President and his ministers use as routes to their various offices everyday.

I won’t waste your time with a long write up this morning but will end by saying that in order to make sense out of making Akueapem Polo a “SCAPEGOAT” let us also imprison the parents of these Street Children or get these Children off our streets Else her jailing will only make her a VICTIM which would’ve served No Purpose.

If we really want to do Right then let us do it Right.