Can a Deputy Speaker Vote When Presiding Parliamentary Debate? 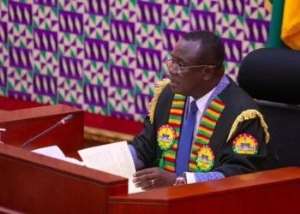 Following the rejection of the 2022 budget by the minority National Democratic Congress (NDC) on 26 November 2021 and reversion by the majority National Patriotic Party (NPP) on Tuesday 30 November 2021, there is confusion as which of the two actions was constitutional or unconstitutional. This article is a brief discussion on whether a Deputy Speaker of Parliament has a vote when presiding over division in the Chamber.

Prior to the discussion and for those who are not familiar with what happened last week, it is useful to recall the two scenarios for consideration.

On 26 November 2021, parliament met to approve the 2022 budget presented by the Finance Minister, Mr Ken Ofori-Atta to the house on 17 November 2021. For vote to be taken, the house required a minimum of 138 members to be present in the house for a quorum, which was the case at the beginning of business. 138 votes is also required for a majority decision in a full house but with a hung parliament of 137 members on each side and 1 independent voting with the majority, the majority realised they do not have 137 members in house and therefore decided to walk out since a vote would have meant defeat and a rejection of the budget.

The minority remained in the house and the Speaker who is not an elected member of parliament presided over proceedings, put the question of the approval to a vote in the absence of the majority. The minority voted to reject budget by 137 votes and since the majority were not in the house, the result was 137 to zero. Following the vote, the majority claimed that the vote was unconstitutional because at the time the Speaker to put the question to the house, there were only 137 members in the house and not the 138 required for a quorum. Therefore, the vote was unconstitutional, null and void.

Then come Tuesday 30 November 2021, the minority also walked out but this time it was one of two the Deputy Speakers, an elected member and from the majority side who was presiding. Therefore, and according to the majority, with the one independent in the house the 138 quorum was met. The majority also voted to reverse the rejection of the budget and approved it.

Since then, the minority has also claimed that there was no quorum of 138 members after they walked out because the presiding Speaker/member has no vote and therefore he should be excluded from the 138 required for a quorum. For this this reason, the vote of the majority was also unconstitutional, null and void.

So who is right in this stalemate, the minority or the majority? Most people say this is purely a constitutional matter and therefore those not happy should go the Supreme Court for interpretation.

Now to the main question of whether a Deputy Speaker has a vote or not when presiding. As I am not a lawyer, I will not take the legal or the constitutional approach in answering the question. Instead, I will take the customary practice approach. That is, what has been happening in the past.

Ghana’s parliamentary democracy is a hybrid of the Westminster and the Capitol parliamentary systems of UK and US respectively, though unlike UK and US, Ghana has no upper house. I will limit my answer to the UK lower house, the House of Commons.

The practice of the Speaker not voting is borrowed from the UK House of Commons and therefore it is a convention that, speakers remain strictly non-partisan and renounce all affiliation with their former political parties once elected into office. For this reason, the Speaker of the House of Commons does not take part in debate or vote. However, this is not entirely true and in fact, the Speaker of the House of Commons can vote but only on very rare occasions. That rare occasion is to break a tie in a very important matter of national importance. However, the convention is that, the Speaker exercises this rare casting vote only to advance further debate on the matter or for the status quo to remain but not for one side to win and close the matter.

This rare casting vote is known as the “Speaker Denison’s Rule” or Convention, which when used results either in further debate or a vote for the status quo. The Speaker Denison's rule is a constitutional convention established by the Right Honourable John Evelyn Denison, who was Speaker of the British House of Commons from 1857 to 1872, and it’s regarding how the Speaker decides on their casting vote in the event of a tie in the number of votes cast in a division.

In 1867, when a tie arose on a motion on Fellowships at Trinity College, Dublin, Denison gave his casting vote against the motion, declaring that any decision must be approved by the majority. The rule as subsequently adopted is that the Speaker, in any division upon a bill, should vote to leave a bill in its existing form.

This rule is still in use and the last time the Speaker, Right Honourable John Bercow used his casting vote was in 2019 when in the second round of Brexit Indicative Vote in April 2019, there was a tie of 310 each (for and against). He used his casting vote for further debate and a third vote.

It is important to note that in the House of Commons, the Speaker is an elected MP and represents a constituency. In order to respect his independence as not belonging to any political party, the Speaker is not contested during general elections. On the contrary, all parties support his or her re-election to the point of even distributing his/her re-election leaflets for him or her.

Can we apply the Speaker Denison’s Rule to Ghana? My answer is yes and no. No, because the Speaker of Ghana’s Parliament is not an elected MP. For this reason, the constitution bars him or her from having a vote or casting vote. What about the two Deputy Speakers who are elected MPs and represent their constituencies?

It is my candid opinion that the Deputy Speakers of parliament by virtue of them being elected MPs and represent constituencies do have a casting vote when presiding, provided the casting vote is by the same principle of Speaker Denison’ Rule. That is, they cannot use their casting vote to end debate on the matter but for further debate. In other words, for the status quo to remain.

For above reason, it is my view that if Deputy Speaker, Honourable Joe Wise exercised his vote on 30 November 2021, it was a casting vote and therefore after 137 votes by the majority, the presiding Speaker could only vote for further debate on the budget until there was a majority vote of at least, 138 excluding himself.

On the question of counting himself for the quorum, for the above reasons of maintaining his independence as presiding member, he could not have counted himself as part of the majority since when he is presiding he has to severe all his links with his political party and in accordance with the Speaker Denison’s Rule.

For this reason, the vote on 30 November 2021 was also not quorate and therefore, unconstitutional, null and void similar to that of the minority on 26 November 2021.