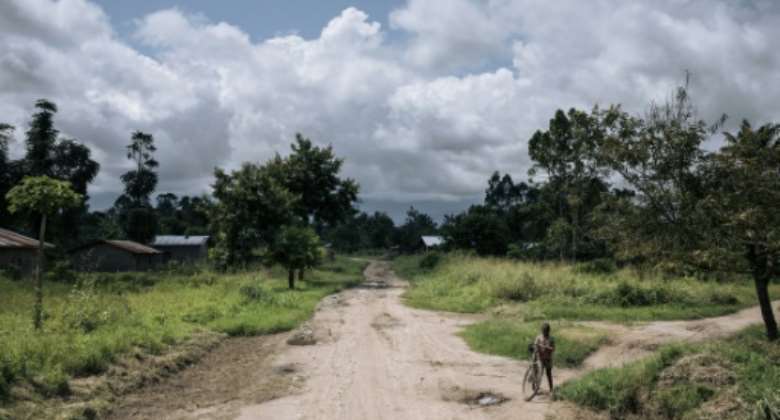 Mutwanga, a town in the Beni region, was abandoned by many of its inhabitants after attacks earlier this year. By ALEXIS HUGUET (AFP)

DR Congo and Uganda on Tuesday announced strikes against the Allied Democratic Forces (ADF), a notorious rebel group that the Islamic State group says is one of its affiliates.

The ADF is accused of killing thousands of people in a years-long campaign in eastern Democratic Republic of Congo (DRC) and orchestrating recent attacks in the Ugandan capital Kampala.

Here's a look at the shadowy organisation:

Who are the ADF rebels?

The ADF is the bloodiest of more than 120 armed groups that roam the eastern DRC, according to monitors.

It was initially a coalition of armed Ugandan groups, the biggest of which comprised Muslims, that opposed Ugandan President Yoweri Museveni.

The DRC's armed forces are struggling to contain the ADF, the bloodiest of more than 120 armed groups in eastern DR Congo. By ALEXIS HUGUET (AFP)

The group moved into eastern DRC in 1995, establishing itself in the rugged Rwenzori Mountains in North Kivu province.

Over the last seven years, the ADF has gained a terrifying reputation in North Kivu and neighbouring Ituri, targeting remote villages for massacres.

The DRC's Catholic Church says the group has killed around 6,000 civilians since 2013.

A respected monitor, the Kivu Security Tracker (KST), blames it for more than 1,200 deaths in the Beni area of North Kivu since 2017.

What about the IS link?

In April 2019, the Islamic State (IS) began claiming responsibility for some ADF attacks through its outlets on social media.

It presented the group as its regional branch -- the Islamic State Central Africa Province, or ISCAP.

Some experts, though, are cautious, saying they are unable to confirm any evidence of direct control by IS over the ADF.

Former hostages of the ADF have described strict rules.

Women must wear the veil, sexual relations outside marriage are punished by public beatings, thieves have their hands chopped off, prayers must be observed several times daily and Allah's name must be invoked before attacks.

On September 22, Congolese troops on a dangerous road in the Beni territory arrested a Jordanian national described as a trainer of ADF forces.

The Ugandan authorities blame the ADF or its alleged allies for a string of attacks this year.

It says the ADF were behind a foiled bomb attack in August on the funeral of an army commander who led a major offensive against Al-Shabaab militants in Somalia. Three men have been charged with terrorism in relation to that incident.

Crime scene: A suicide bomber was killed and several passengers were injured by a blast on a long-distance bus in Uganda. By - (AFP)

On October 23, a bomb attack at a roadside eatery in Kampala killed one woman, and a suicide blast on a bus near Kampala two days later wounded several people.

In late October, the Ugandan police said they had arrested suspected ADF members who they believed were plotting a new attack on "major installations".

On November 16, four people were killed and 33 were injured in twin suicide bombings in Kampala, which police attributed to a "domestic terror group" linked to the ADF.

On October 1, Rwanda said it had arrested 13 members of a "terror cell... that worked with the Allied Democratic Forces" in a suspected plot to carry out attacks in the capital Kigali.

The DRC's armed forces launched a crackdown against the ADF in late 2019, but the massacres continued unabated.

Going into higher gear, President Felix Tshisekedi in May declared a "state of siege" in North Kivu and Ituri, replacing top civilian officials with senior military officers or police.

Since then, the army claims to have killed 175 "ADF combatants" and arrested 273 "collaborators" in the Beni area alone.

However, ADF-attributed massacres have continued, and extended into Ituri province.

According to the KST, 623 civilian deaths attributable to the ADF have occurred since the start of the state of siege.

In October, Museveni offered Ugandan support for hunting the ADF on Congolese soil, "if the government of Congo authorises us."

The issue is politically sensitive in the DRC, given the past role of Uganda and Rwanda in stoking instability in the east of the vast country.

After the November 16 blasts in Kampala, Tshisekedi allowed Ugandan soldiers to "enter Congolese territory to chase ADF terrorists," a presidential advisor in Kinshasa said on Sunday.