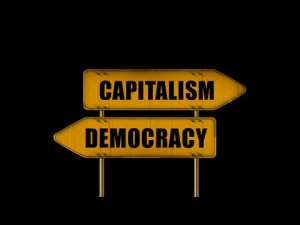 "The oppressed are allowed once every few years to decide which particular representatives of the oppressing class are to represent and repress them." Karl Marx.

The two major political parties that are dominating our body polity are conceptualized in moneyocracy and this phenomenon is rampant and discharged in the struggle for political power by individual folks and political parties. When one has the intentions to aspire for political power in the offing, the status quo is "you must be rich and dominating a society with wealth"and not on meritocracy. This moneyed people or class even leverage for the higher office meaning, they would scoop multiples of what is leveraged. Money is recklessly and unconscionably used and seen as merit for power. Those in this class decoy the masses to buy their power in a silver platter. And is sorrowful that, the people who are Economically and developmentally handicapped and in absolute destitute fauna and flora and who should be demanding for societal development and progress denies the nation the right and good leadership but for their selfish reasons buy to these cheap gifts and allow such persons to assume a political office. This system is not meritorious of power based on meritocracy but moneyocracy and to some extent bureaucracy when the person contributions to a party success is recommendable This scenario makes the rich as a monopoly of power, wisdom and favours even when they are not, therefore repressing and chaining the masses in Economic constraints, insecurities, the suffocations and infringement of rights hence aggravating the plight of the people in an absolute state of obscurity .

When that political folks attains power, they suit a demigod and desert the society or institution that handed them power. They become scarcity and only returns to the people only when there are occasions like festival,funeral etc where they come to tout themselves for the next elections.

The political espouse of some parties and individuals running this system are normally not reditional to the people but utterly rapacious and reprobate and not having empathy for the plight of the masses. What they give to the masses in cash, they take it back with high interest rate in the form of looting the state. The system frustrates and impoverishes the people.

“While the miser is merely a capitalist gone mad, the capitalist is a rational miser.”Karl Marx

Moneyocracy has derange our leadership and the beauty of our democracy, we are in servitude because moneyocracy and capitalism has given us despot and rogue leaders.

Moneyocracy has given us dictators and misleaders.
The leadership of most folks from this class of system are obnoxious, obtuse and absurd in discharging state duties. They are not the leaders for the people and have NO business in government if not for their greediness, parochial and self-aggrandizement.

Capitalism infuse moneyocracy. In capitalism the people means of survival is corruption, dishonesty and mendicancy. The capitalist hoards entirely the country's wealth and distribute it among a small class of people I called "party elites and folks" which are made up of greedy plunderers and bastards serving and defending their own interests and the system they operate. The distribution of wealth in capitalism is within a capitalist apartheid system that enrich a few and suppresses and impoverishes the masses to plenary destitute. This is a socially, politically and Economic degeneracy that must not prevail in class warfare for equal wealth distribution.

"Capital is dead labor, which, vampire-like, lives only by sucking living labor, and lives the more, the more labor it sucks." Karl Marx.

Moneyocracy in a form of capitalism seeks to milk and deplete the working class. In Africa, capitalism means corruption, so all capitalist regimes are drastically corrupt and stoic, and this has failed the masses while we have not also enjoyed apropos socialism but capital - socialism. And this should not be the dynamics in Capitalism.

Dr. Kwame Nkrumah of Ghana, a Revolutionary and African socialist, Mahammed Gaddafi of Libya,Samora Moises Machel of Mozambique, Thomas Sankara of Burkina faso, Fidel Castro of Cuba and some few socialist regimes in the African continent successfully implemented and delivered socialism in the continent that actually transformed and reflected in the lives of the people.

Africa needs a well-designed and planned socialism system with rapid development and Economic power and growth to prosper Africans. We have the largest resources deposit in the world so our Economic plans should be focused on elevating our people Economically to eradicating poverty.

Africa must stop borrowing and unite to create monetary institutions with firm stipulation of the resources to the Western to build Africa.

Akufo-Addo doesn't have to advertise his reshuffle — Kyei-Me...
26 minutes ago

Stop threatening ECG Staff, we are losing out livelihood — N...
26 minutes ago