Mahama led NDC to opposition; he has nothing better to offer again – NDC’s Dela Coffie 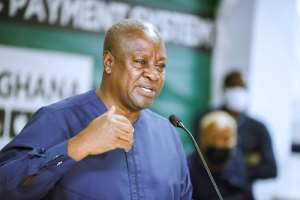 A controversial member of the National Democratic Congress (NDC), Dela Coffie claim former President John Dramani Mahama has nothing better to offer again after leading the party into opposition twice.

This is contained in the latest piece posted on his Facebook page where he tackles some staunch supporters of the former President for attacking Dr. Kwabena Duffuor few weeks ago.

According to Dela Coffie, the mention of the name of former Finance Minister alone sends tremor to the camp of all those pushing to have John Dramani Mahama returning as flagbearer of the NDC in the next election.

Dela Coffie insists that after sending the NDC into opposition, Mahama is not the right man to lead the umbrella party in 2024.

“Isn’t it as obvious to these guys as it is to me that Mahama has failed to prove himself as a leader, and that he’s out of the question and reckoning for the presidency?

“The man has been President, and he led the NDC from government into opposition. Does he have any redeeming qualities to offer anything new? No, I cannot think of anything. Which is why it’s of no use sidetracking some of the best brains in the NDC all in an attempt to impose Mahama on the party,” part of the Dela Coffie statement on Facebook reads.

Although neither John Dramani Mahama nor Dr. Kwabena Duffuor has officially announced intentions to contest the flagbearership of the party, there continues to be a rivalry among staunch followers of the two leading members of the NDC.

Find below the full statement from Dela Coffie:

Dela Coffie writes: It's time for the NDC to rethink and reshape perceptions

I've had a pretty interesting night online, just checking out reactions on the poster released for Dr. Kwabena Duffuor's intended

"GHANAIAN DREAM" economic lecture under the auspices of the Institute of Fiscal Studies on the 29th of November 2021.

One of the more vociferous Mahama frontmen, showed himself in his true colours by questioning Dr. Duffuor's competence. He claims Dr. Duffuor oversaw the mismanagement of depositors funds leading to the collapse of Unibank.

Another comment - from a moderate this time - calls Duffuor the foulest of expletives and claims he's too old to lead the party like the NDC.

Oh yes, the cult followers of Mahama have ramped up their attacks on Dr. Duffuor simply because he has chosen to organise a lecture and to speak to matters of national concerns.

Frankly, I'm enjoying the snarling from these guys who just can't take the beating Dr. Duffuor’s recent outings are inflicting upon their sense of entitlement and preening self-regard.

Indeed, I'm getting the distinct impression that the imminent announcement by Dr. Duffuor of his presidential bid is driving the Mahama camp over the edge -He's officially not in any contest and yet his public appearances are causing fear and panic among the followers of Mahama.

These guys appear convinced of Dr. Duffuor’s value in their own commentaries but they are not smart enough to realise that the whole Unibank saga was a political witch hunt which is not even flying in court of law. That leads to the threshold question of why these Mahama henchmen are so coy and reticent about a man armed with just good intentions, and have answers capable of remedying a damnable NDC that has almost lost its bearing under Mahama?

Again, what makes them think they can take down a man whose credentials are as tall as a giant? I mean, in comparative terms, can JM's credentials measure up to that of Dr. Duffuor? Regarding the state of NDC, how can the opposition to Duffuor say he is too old and can't win, when a young and agile Mahama has lost two general elections?

Isn't it as obvious to these guys as it is to me that Mahama has failed to prove himself as a leader, and that he's out of the question and reckoning for the presidency?

The man has been president, and he led the NDC from government into opposition.

Does he have any redeeming qualities to offer anything new? No, I cannot think of anything. Which is why it's of no use sidetracking some of the best brains in the NDC all in an attempt to impose Mahama on the party.

My point is, it's all very well saying Duffuor is old and will probably not win against Mahama, maybe he will not, but what is certain is that those seeking to oppose his presidential bid have actually lost two elections on the trot and show no signs of improving, so why not take a gamble and try something different? The NDC members who three years from now would be licking their wounds and asking themselves "what went wrong" must instead ask themselves that question now while there’s still some time to do something about it.

So clearly, for the good of the NDC, those elements obstructing Dr Duffuor should decide whether they want to continue with the sniping, the bitching and quibbling over minutiae - which seems to be their favourite pastime.

Admittedly, there is a serious problem within the NDC. If you were being kind, you would call it blind unquestioning loyalty or, kinder still, the ostrich mentality. Those of us who aren't sucked in by the cult of Mahama need to do all we can to fight it.

And in all this, I think an element of waking up and smelling the coffee would appear to be in order for those who ought to know better. In the meantime, I'm hanging on to the slim hope that when, eventually, people wake up to the grim reality of the NDC situation, it won't be late in the day.

We can't be faced with an open goal and yet be doing everything possible to score an own goal.

‘A Deputy Speaker is not a Speaker, I’m an MP’ – Joe Wise
8 minutes ago