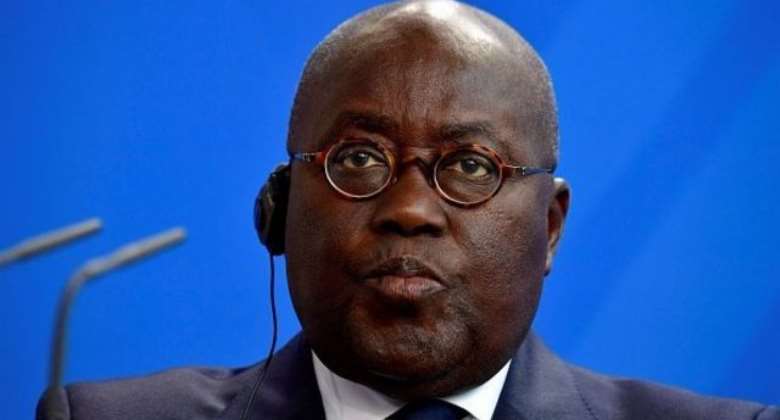 According to the advocacy group, a careful research and analysis of governance under the President over the last five years have led to the conclusion that he is presiding over a failed presidency.

Making the allegation that President Akufo-Addo’s presidency has been characterized by deceit, lies, nepotism, cronyism, bribery, and corruption as well as tribal hatred, CDG-GH says it is time the President exit office.

"The CDG-GH is convinced that a President who permits corruption is equally corrupt and must resign when his presidency has failed. When we think of Article 69 of our Constitution and the causal relations to daylight robbery on Serwa Broni allegedly by National Security, we consciously begin to think of impeachment of the President. I leave this to the lawyers and Parliament,” a statement from CDG-GH signed by Executive Director Dr. E. K. Hayfod has said.

The statement adds, “The dichotomy of a non-performing 77-year-old President and his insatiable desire to remain in office is a mystery. Mr. President resign or face impeachment.”

The Caucus for Democratic Governance accuses President Akufo-Addo of mismanaging the economy and engaging in excessive borrowing while it also carelessly uses the taxpayers money.

With a feeling of disappointment, CDG-GH blasts the President over what it says is the failure to create jobs for the unemployed Ghanaians already facing hardships due to the poor state of the economy.

Below is the full statement from CDG-GH:

NANA ADDO IS PRESIDING OVER A FAILED PRESIDENCY.

LUXURY JETS IN THE MIST OF KILLER TAXES AND JOBLESSNESS

The Caucus for Mature Democrats (CMD), after careful research and analysis of governance, over the last five years, can only conclude that Nana Addo is presiding over a failed presidency. A presidency characterized by deceit, lies, nepotism, cronyism, bribery and corruption and tribal hatred. A presidency, that relies on excessive use of Army and Police brutalities to intimidate and suppress the people. A presidency that mismanages the economy, and engages in excessive borrowing, and careless use of taxpayers money. A presidency that cannot create jobs, but brings financially trapped NABCO project in disarray, apparently preparing to send 100,000 graduates back on the street. Millions of jobless are desperate and can afford only a meal a day, due to high cost of living. In spite of these worrying developments, “ I care less” is still cruising in luxury jets costing the tax payer millions of dollars. Indeed we need a paradigm shift in our internal politics. A paradigm shift that commits leaders under oath, to think more of the country and its people, than their egoistic interest.

Nana Addo has a government:

Creating jobs has been one of the difficulties of this Government. Five years down the lane, only limited number of casual jobs have been created. Nation Builders Corps (NABCO) has been demonstrating because they are not being paid. Jobs created in the Agricultural sector are mostly casual jobs lasting a few hours to a few months or highest a few years. This is negligible, compared to the 3.5 to 4 million long term jobs created through the massive infrastructural projects of former President Mahama over a period of four to five years.

The strategy of job creation by former President Mahama is easy to understand. Massive projects like construction of Airports, Universities, Regional hospitals and roads, begin by employing several thousands of people. It takes three or more years to complete such major projects. At the end of the projects, the projects employ new workers. For example, newly built Universities take in students, employ lecturers, administrators, technical personnel, labourers, kitchen staff and many others. The hospitals employ doctors, nurses administrators and labourers among others. The old workers are employed on new projects after completion of project. This is the wisdom of creating jobs and putting money into the pockets of the people, so that businesses, retail shops, city malls and markets can make brisk business.

Instead of creating jobs, Nana Addo is killing existing jobs. Nana Addo`s approach to the crises in the banking sector, has led to serious job losses. The Banking sector reform led to closure of many banks and the loss of many jobs. Some Information on entrenchment comes from National Investment Bank (NIB), where 3,000 workers were laid off. Between May and August 2018, not less than 10,285 job looses were recorded. EIB Network and Group Nduom lost 250 jobs; Textile Works lost 235 jobs; BXC Company Limited lost 200 jobs; Rider Steel Company lost 400 jobs; Goldfields Ghana lost 2,500 jobs; Obuasi Goldmines lost 2,400 jobs. Consolidated Bank Ghana lost 1,700 jobs; Vodafone Ghana lost 2,000 jobs and Oil Marketing Company lost 4,000 jobs. Besides about 150,000 people have also lost their jobs directly or indirectly due to 437 financial institutions that were shut down. During the COVID -19 and in 2020, many thousands of jobs were lost.

The Government of Nana Addo In spite of ten different taxes imposed last year, has in the 2022 budget submitted to Parliament series of taxes meant to increase the hardship on the people of Ghana.

Among them are 1.75% Bank Transfer tax and 1.75% internal remittance tax. 1.75% (digital) tax on all electronic transactions. 15% increases in fees from charges of Government. This affects all fees paid for Government services including :

All these fees will go up by 15% upon approval by Parliament. There will be reversal of 50% and 30% benchmark value discounts on 42 categories of imported goods and vehicles. These will now be taxed 20% to 30% respectively.

The irony of the episode is that the office of the president alone has a budget of 3 billion GHc which he spends lavishly on luxurious executive jets; while the Presidential jet which is in excellent condition stays unused.

Ghana has now a national debt of over 400 billion and Nana Addo`s Government alone has borrowed 180 billion with nothing to show. Promises of 80 hospitals, 2021 a year of roads, and the so called “Agenda 111” were all meant to deceive the people. Interest payment of our debt amounts to 37.8 billion. This in addition to other statutory payments add up to 107.9 billion. Our revenue from taxes however is 100.5 billion, which is less than what we have to pay. Calculations show we have nothing left for the so-called projects. We have to borrow to pay our interests on loans.

The CDG-GH is convinced that a President who permits corruption is equally corrupt and must resign when his presidency has failed. When we think of Article 69 of our Constitution and the causal relations to daylight robbery on Serwa Broni allegedly by National Security, we consciously begin to think of impeachment of the President. I leave this to the lawyers and Parliament.

The dichotomy of a non performing 77-year-old President and his insatiable desire to remain in office is a mystery. Mr President resign or face impeachment.