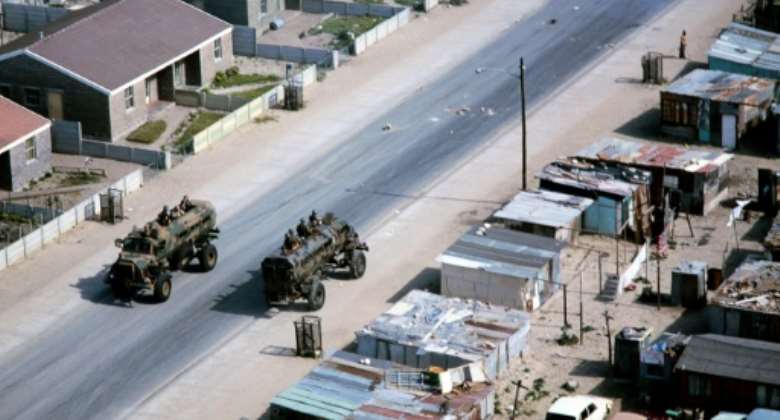 Apartheid security forces patrol Cradock, a black township where several activists were kidnapped and killed, in 1985. By Gideon Mendel (AFP)

Four activists abducted and murdered. A man pushed to his death from a police building. Five teenagers lying in bed, shot dead by soldiers.

These are a just some of the apartheid atrocities for which FW de Klerk, South Africa's final white president who died last week aged 85, could have been forced to account had he lived longer, observers say.

Outside the country, he nurtured an image of a peacemaker for his role in dismantling apartheid for which he shared the Nobel peace prize with Nelson Mandela, leading to the first multiracial elections in 1994.

But at home, families seeking justice for apartheid crimes have long charged that he resisted giving testimony to investigations into atrocities committed when he was president.

In July, as South Africa was going through unprecedented rioting and looting, his foundation released a statement which went largely unnoticed but provided a major clue as to why that was.

Buried deep in the statement was one paragraph that contained explosive information.

"Because of an informal agreement between the (ruling) ANC leadership and former operatives of the pre-1994 government, the NPA (National Prosecuting Authority) suspended its prosecutions of apartheid-era crimes," he said.

Whispers of such a deal had swirled for years, but had never been so explicitly confirmed.

"We had always suspected there was some kind of trade-off that had taken place behind closed doors," said Lukhanyo Calata, whose father was one of four activists abducted and murdered in the southern town of Cradock in 1985.

After Nelson Mandela was elected president in 1994, South Africa undertook a much-lauded effort to account for the atrocities that happened under apartheid.

Members of the "Black Sash" anti-apartheid movement pay their respects to fellow activists killed by the South African police in Cradock in 1985. By Alan BOESAK (AFP)

The Truth and Reconciliation Commission (TRC), led by Archbishop Desmond Tutu, offered amnesty to those who gave a full accounting of their crimes, with around 850 granted.

But the TRC also recommended that the National Prosecuting Authority (NPA) pursue more than 300 cases, and set out proposals for reparations.

For the Cradock Four, the TRC denied amnesty to the killers, but they have never been prosecuted.

De Klerk was on the council, where the military recommended the "permanent removal from society" of Calata's father, Fort Calata, and fellow activist Matthew Goniwe.

Calata has pursued legal action to force prosecutors to take up the case, and to subpoena testimony from De Klerk.

"It is unfortunate that De Klerk is gone. He is a former state president. He would have been privy to a lot more information," Calata told AFP.

"Unfortunately we never had the opportunity to do so because the African National Congress and the government it leads never took it seriously to prosecute."

Not all of De Klerk's unanswered questions date so far back. Just one month before he shared the Nobel Peace Prize with Mandela, he ordered a raid on a home where soldiers shot dead five youths sleeping in their beds. Two were 12 years old.

De Klerk admitted to ordering the raid, but said he received bad information that the house was being used by armed freedom fighters.

"For a president to authorise the killing of children is a blatant act of terrorism," Mandela said at the time.

That was far from Mandela's only harsh criticism of De Klerk, but the "rainbow nation" euphoria that accompanied the Nobel awards and the first election soon overshadowed them.

De Klerk did issue a posthumous video apologising "for the pain hurt and indignity and the damage that apartheid has done".

But families are still pushing for answers. Imtiaz Cajee's uncle Ahmed Timol was thrown to his death from the 10th floor of the notorious police headquarters in Johannesburg in 1971.

Rodrigues succeeded in delaying a trial, and died before it began.

De Klerk's death is another reminder that the last generation of South Africans to live under the full force of apartheid is passing on, making their secrets harder to expose.

"It's a pity that he's no longer there to respond to the questions," Sooka said.

"There's no doubt in my mind that that prejudices the rights of the families to the truth and to criminal justice."