The Parable Of One Million Mahama Illusive Ballot Papers 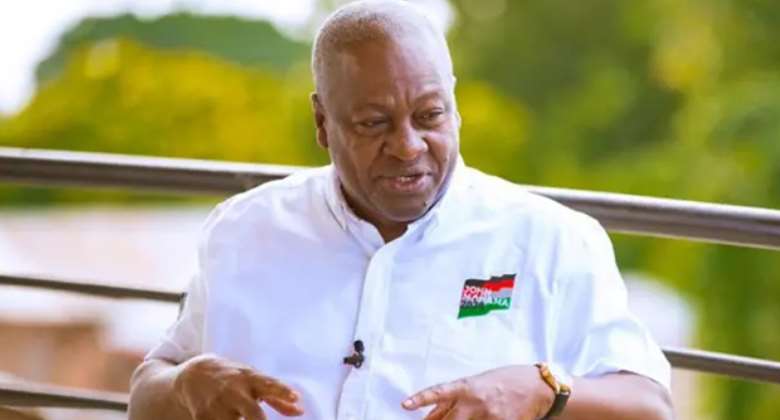 You may be asking why I constantly focus my binoculars on the man called John Dramani Mahama. The reason is that he continuously and carelessly opens up his underbelly for attacks.

He is an unguarded missile and a loose cannon that can strike anyone, anytime, anywhere, and anyhow.

In short he is a dangerous person who must be watched carefully. His unfortunate and irresponsible comments can plunge this nation into chaos because his followers ignorantly believe in whatever he says.

If a loser of an election says he was able to trick his supporters to hit the streets and demonstrate in order to cool down tempers, what else can't he do to destabilize the nation?

Behind his seemingly charming smile is venom which he can spit out at any time. We have seen his likes before. His insatiable lust for political power has no limit. The man is very desperate and that makes him unpredictable. When an accomplished loser calls his supporters to 'do or die' on the next general election and that he will not go to the Supreme Court again if he loses, we need to be on our guard.

Mr. Mahama is acting as if he is the only person who has ever lost a presidential election in this country.

When Mr. Kufuor lost his presidential bid, we never heard him kicking and yelling, nor did we ever hear him spewing vitriolic invectives on the Electoral Commissioner. He stayed cool and reorganized himself for yet another chance which came and he won. On two occasions, the late President Prof. Fiifi Atta Mills lost the Presidential Elections but he took things this cool. He believed he who fights and runs away lives to fight another day. He eventually won the Presidential Election in 2008.

If there is anyone who is able to bear the pain of defeat in an election, that person is Nana Addo Dankwa Akufo-Addo. In 1998 he lost the NPP Presidential Primaries held at Sunyani to Mr. Agyekum Kufuor. Those of us who supported him became peeved but he gracefully impressed upon us to put everything behind us and work together to win the general election. He and Mr. Kufuor, together with all those who contested the primaries joined hands and worked beyond human endurance to win the 2000 elections. He was made the Minister for Justice and Attorney General. He later became the Foreign Minister and diligently served Mr. Kufuor till the end of Kufuor's tenure of office.

The man contested and lost the Presidential election to the late Professor Atta Mills with a margin of barely forty eight thousand votes. He never complained and straightaway hit the road to campaign for the 2012 general election. Again he lost but he did not lose hope. He believed if it is the will of God that he will become the president of Ghana one day, he will become one. When the Supreme Court ruled against his petition, he quickly accepted the verdict and congratulated Mr. Mahama who was declared the winner by the apex court.

Again his party pushed him into the arena to contest the Presidential Election one more time. He won with a margin of more than one million votes. A feat which has never been achieved by any presidential candidate in this 4th Republic. A mesmerized and confused John Mahama did not cough because Ghanaians spoke and spoke loudly. He started growing lean and talking “by heart”. His party thought if Mahama contested again he will win like the way Nana Addo and Prof. Mills did. It was the biggest mistake they did. A lame horse was asked to run and he lost again.

Instead of Mahama accepting defeat, he declared himself the “President Elect” and went about swaggering and walking tall with chest out and a stuffy brown envelop firmly stuck under his armpit. He urged his supporters to hit the streets and burn tyres. Almost all the regional capitals experienced the “Mahama Demonstrations”. The good people of Ghana told Mr. Mahama to go to court if he has any proof that the election was rigged and so he went to court where he lost miserably. Since the court ruling almost a year ago, restless Mahama has refused to congratulate Nana Akufo-Addo. He continues to insult the Electoral Commissioner and the Judges of the Supreme Court. He has shamefully refused to accept the ruling of the Supreme Court, forgetting that it was the same Supreme Court that ruled in his favour in 2013 after the 2012 fraudulent election. He is gradually losing the status of a statesman.

What prompted me to write this piece is the laughable and infantile accusation by Mr. Mahama that the EC printed extra one million ballot papers which they added to the votes garnered by Nana Akufo-Addo. One million ballot papers? How childish! Does this man know the quantum of one million ballot papers? How did these ballot papers find their way into the ballot boxes with all the polling agents present? Why did his legal team, led by no mean a lawyer but TsatsuTsikata fail to mention this one million ballot papers during their submissions at the Supreme Court? When I heard him making this silly comment I asked myself: Is this man okay? Is he hypnotized or possessed by a powerful deity? How can a former president and a seasoned politician for that matter goof so badly? This guy is a disgrace. Probably the time is up for the leadership of the NDC or his family to hire him an exorcist. Where I come from when a man starts talking the way Mr. Mahama is doing since he lost the election, the person is confined in a room and a jujuman is commissioned to bath him with special herbs for twenty one days. His hair is shaved clean and he is fed with only guinea fowl eggs soaked in the blood of a frog during his confinement. If the NDC leadership or his family fail to do this and carelessly urge him to contest again and he loses (which he will surely lose) he will go gaga. Mark my words.

But come to think about this: Where are all the elders of the NDC? Where are the Ahwoi brothers, Dan Abodakpi, ET Mensah, Totobi Kwakye, Faustina Nelson, Nana Akuoko Sarpong, Huudu Yahaya, Kwesi Botwey, Kojo Tsikata, Fui Tsikata, Tsatsu Tsikata, Kwame Pepra, Tony Aidoo, Goosie Tanoh, Sherry Ayitey, Alhaji Ibrahim Adam, Sipah Yankey, Alhaji Mumuni, and a host of other gurus of the party? These ladies and gentlemen are alive and kicking but it seems they have deliberately kept silent and asking the babies with sharp teeth, led by an upstart and an opportunist called Sammy Gyamfi to do it if they think they can do it. As for Nana Konadu Agyemang Rawlings, she foresaw what was coming so she uncoiled herself from the mess and she is living a private life. At her age and experience, she would not like children who were born too late when she and her late husband did put their noses on the grindstone to form the NDC, to drag her hard won reputation in the mud. The Akans say 'Se wo ni panin a due' (Woe unto he who has no elder). As for me, if I go to my farm and see the eggs of a cobra burnt into ashes, I thank God for small mercies and sing Halleluiah. I will have no tears for the mother cobra. The happiest day in my life will be the day Mr. Mahama loses the 2024 Presidential Election, that is if delegates vote for him in their primaries. He will then know his smoothness level.

Anytime I sit by my computer to write a piece like this, I make sure my stick of cigar and ashtray is by my side. I have become so addicted to cigar so much so that I can't write a paragraph without puffing my cigar. So here I go with a stick of Oliva Monticello, very popular among celebrities like Arnold Schwarzenegger. You think say I be small boy? Close your nostrils if you don't like the aroma and stop complaining.