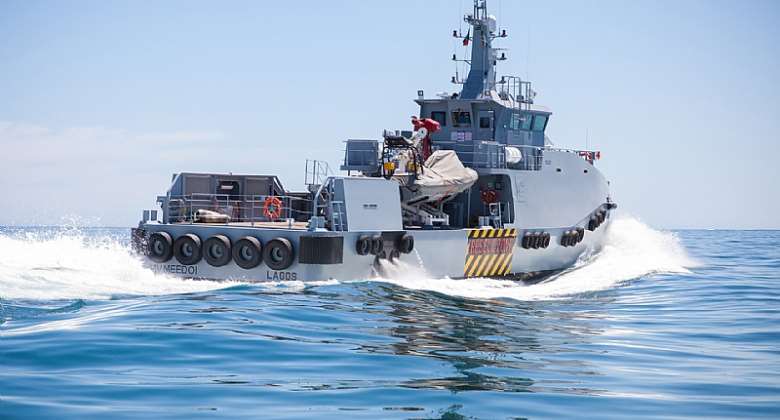 Christened the ‘MV Meedoi’, the next-generation vessel is slated to be utilised for contemporary security and patrol operations within the Gulf of Guinea. The platform was innovatively manufactured by Paramount Maritime company, Nautic Africa despite the shipbuilding industry at large having to endure the numerous lockdowns and social distancing restrictions imposed by the COVID-19 pandemic. Nautic Africa also announced that it received its re-certification for ISO 9001:2015 for meeting globally-recognized standards in maritime management, operational safety and pollution prevention.

Representatives from Paramount Maritime Holdings and Nautic Africa alongside leading suppliers and staff participated during the christening ceremony, held both virtually and on-site in Cape Town.

Paramount Maritime Holdings CEO, James Fisher, stated at the launch of the 35m Sentinel that, “The MV Meedoi captures the passion and commitment of the team at Nautic Africa and will serve its new owners proudly and consistently for many years into the future. May the vessel realize the dreams for which she was built and now must deliver.”

The newly-designed 35m Sentinel is an aluminium-hulled vessel with an optimal V-bottom hull shape. Sporting a length of 35 metres, a beam of 7.5 metres and draught of 2 metres, the vessel comfortably hosts up to 6 cabins for both crew and security personnel. The Sentinel’s 11x6 metre cargo deck can further accommodate 20 tons of cargo or a 20-foot shipping container. A 6.5 metre semi-rigid boat can also be launched via a davit.

The Sentinel’s wheelhouse and main deck accommodation structure is fitted with composite ballistic armour while gun mounts and ballistic shields are fitted to offer robust coverage around the vessel. Yet despite offering industry-leading wheelhouse protections of STANAG Level II and deckhouse ballistic protections of STANAG Level I, the vessel, powered by three Caterpillar C32 main engines developing 1,193 kW each and three propellers, provides for the 35m Sentinel a top speed of 28 knots and a range at maximum speed of over 1,150 nautical miles (NM).

The company has reported in 2021 an upswing in new customer demands in the security boat sector on the continent, in large part due to the myriad of maritime threats which today challenge the trajectory of Africa’s numerous blue economies and gateways to the rest of the world. These threats have also necessitated a strategic pivot in existing customers’ requirements; from service vessels to security.

Following the ceremony, Fisher added that, “We are privileged by the responsibility put upon us in meeting what has been consistent and positive growth in demand, year on year, with effective supply in the security vessel market”.

“Demand has further risen from our customers operating in the commodities transport markets (e.g. oil and gas and offshore renewables), with particular regard to those based in the Gulf of Guinea where over 90% of violent maritime conflicts around the world took place in 2020, including threats to the region’s bevy of national resources caused by transnational piracy, bunkering and even terrorism”.

“Paramount Maritime emblemizes our industry’s resiliency and I predict continued growth for African shipbuilding in the years to come,” Fisher concluded.

Paramount Maritime Holdings owns a networked group of synergistic companies encompassing activities in the Industrial Maritime sector including the design, manufacture and service support of Naval, Commercial and Recreational vessels as well as the import and distribution and retail of marine products

Nautic is positioned as a leading shipbuilder and maritime services provider in Africa and beyond; using relationships, technology and skills to put our vessels at the forefront of modern shipbuilding. Nautic consists of naval architects, mechanical engineers and industrial designers who facilitate the construction and repair of ships and boats including ferries, warships, high-speed craft, fishing boats, rescue boats, yachts and power boats.

Paramount Group is the African-based global aerospace and technology company. It is a leader in defence and security innovation and is a trusted partner to sovereign governments around the world, providing groundbreaking products, services and consultancy, including support for peacekeeping missions. Please visit http://www.paramountgroup.com for more information and follow us on Twitter .