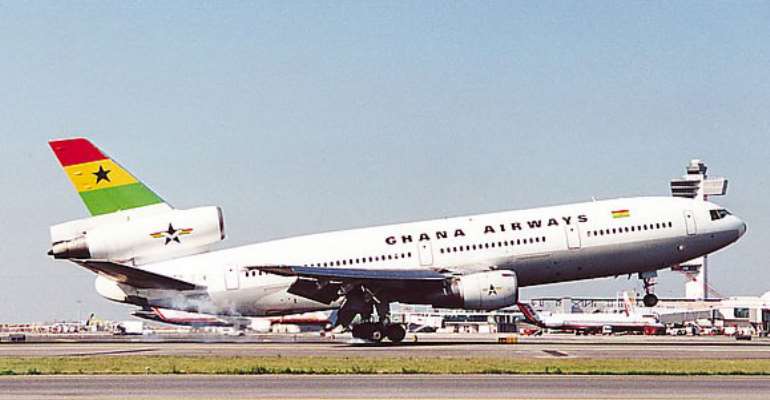 It is unfortunate to hear of the woes of the national airline which used to serve us so well. Today, flights are always cancelled or delayed due to unknown reasons and we won't like to see the national airline die and be burried. Information reaching me shows that, the government have backed out of the alliance talks with Nationwide, the South African airliner which wanted to come to the aid of Ghanair and I think it is time we help with our ideas. Firstly, there will have to be a look at the Strength of the national airline.
STRENGTH 1. Ghanair seem to be one of the few airlines that fly non-stop to the United States
2. It is one of the best if not the best airline on the sub-region after the collapse of Air Afrique.
3. Their motto puts them in a very good position
4. They fly to most of the important destinations around the world as far as the Ghanaian is concerned.
5. They boast of very good Pilots WEAKNESSES 1. They are not punctual and thus making it difficult for people to opt for it when flying to destinations where they can easily get to on Ghanair.
2. The air-hostesses aren't very pleasant and nice thus making people leave out the national airliner as an option to consider when travelling both home and abroad.
3. Ghanair spends so much time on foreign tarmacs thus leading to the accumulation of airport taxes
4. They idea of whom you know is affecting the effective management at the Ghanaiar offices.
5. Number of free tickets offered to Staff and their family is only draining the resources of Ghanair
6. The inability of Ghanair to reposition themselves in the wake of financial crisis is a big blow to Ghanairs image.
7. The inability of Ghanair to deal with the numerous scandals compelled so many people to lose confidence in them.
8. The amount of money paid out to passengers anytime the flights are delayed isn't the best as BA and most of the major airlines hardly do this for passengers.
OPPORTUNITIES 1. Ghanair can capitalise on the fact that, they are on of the few airlines that fly non-stop to America and grab the American market on the sub-region
2. Repositioning will help restore some confidence in Ghanair and boost their sales.
3. They can generate more revenue by giving Staff discounts instead of free tickets.
4. They can probably form an alliance with one of the major airlines after repositioning themselves and working on their punctuality.
5. They can probably control their own traffic at the local airport s BA does to save money
6. Cutting down on delays can reduce the amount of money used to service debts and yield NPV's THREATS 1. The alliance between BA and Nigeria Airways is a threat to Ghanair
2. The increase in the number of flights by KLM from Kotoka Airport poses a threat to the activities of Ghanair
3. The attitude of their Staff both on the ground and on air. Ghana Airways need to do an effective management information system from time to time as this has led to the success of the major airlines around the world. There are so many things to the airline business and I am prepared to forward a SWOT and PEST analysis I did on BA to the management of Ghanair for study as we all want to see the best of Ghana and our economy.All the best in the coming years Einstein (Great Britain)