The consistent falling standard of education in Nandom, a course for worry 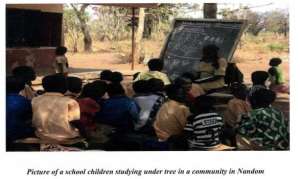 Malcolm X espoused that education is the passport to the future, for tomorrow belongs to those who prepare for it today. It is without a gainsay that Nandom Municipality for past years has made tremendous strides in human resource, institutions and other physical developments via education. One therefore cannot contest the nation-wide saying, “education is the key to success”.

The municipality continues to ride on the wheels of education to chalk significant milestones presently. We therefore cannot afford to cast education into the gutters and continue to chart the familiar path of excuses and blame shifting.

The human resource of Nandom churn out by education has contributed in no small way to the development of the nation Ghana. It is worth noting that one can find at least a native of Nandom in every office in this country. I am not boasting rather I am appreciating the benefits the people of Nandom derived from education. One cannot talk about Nandom without the mention of Prof. Delle, Prof. Kuupole, Dr. Gyader just to mention a few. In writing Ghana’s political history, it would be incomplete without the mention of Hon. Sanziri, the first MP in Nandom, Prof. Banjamin Kuubuor, Hon. Ambrose Dery among others. All these great personalities would not had made it without education.

Nandom Municipality was carved out from the then Lawra-Nandom district by NDC in 2012. Today, the municipality has seen a significant facelift as a result of the efforts of these great personalities aforementioned. It is considered the fasters growing municipality among its peers. It is not a magic that lifted the municipality to her current status rather it is the kind of education our people got.

As rightly espoused by Marian Wright Edelman, the purpose of education is for improving the lives of others and for leaving your community and world better than you found it. This is exactly the case Nandom municipality experiences.

Despite the progressive movement of the municipality, there is a serious incessant debilitating challenge that signals a gloomy picture in the future. The down-ward trend of events in the recent BECE performance in Nandom compared to previous records has been very worrying and troubling.

In 2018, we were taken aback as the academic performance of Nandom district at the basic level began to dwindle. There has been a sharp U-turn of Nandom performance in BECE for sometime now. The situation has not been arrested till date. The municipality was ranked third (3rd) from the bottom, that was the 214th position out of 216 districts with 32.1 scores. Nation-wide, the municipality was able to overtake only two districts - Pusiga in the Upper East Region and Krachi Nchumuru in the Volta Region. Region-wide, Nandom was ranked last out of eleven (11) districts in the Upper West Region.

In 2019, the narrative did not change. Nandom Municipality again was ranked second (2) from the bottom, that is 215th position out of 216 districts. In the Upper West Region, Nandom recorded last again.

The latest results that was released two weeks ago is the 2020 BECE District League Table. Surprisingly and more worrying is the position our noble district got. This time round, Nandom was ranked second (2) position from the bottom. The municipality only succeeded in beating Sissala West nation-wide out of 216 districts.

This is how worsening the basic school’s education performance in Nandom has got to. There is therefore the need for all hands-on deck to wage a relentless war against this seemingly insurmountable canker.

The major cause of this down-ward trend of events is indiscipline anchored on the overly powerful child’s rights imposed on us without their accompanying responsibilities. Over politicization of issues, irresponsible parenting and inadequate logistics are some of the challenges militating against the education in Nandom.

I want to use this opportunity to make a clarion call on our traditional leaders, stakeholders, the youth and parents to put our heads together so that we can wage a serious war against this destructive agent in order to undo this shame on our land. Our elders say that when spider webs unite, they tie up a lion.

For the purpose of evidence, my readers can crosscheck this on 2014-2020 District League Tables.