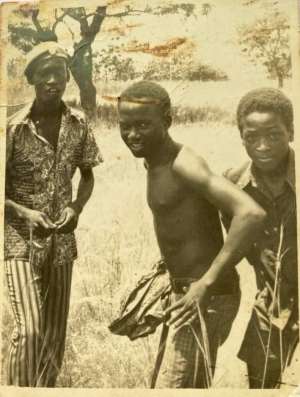 “They were wandering among the bushes and under the trees, probably chasing rats and grass cutters or pelting some innocent birds off their perch for some lunchtime delicacy. Beyond titillating the imagination this way, the photo captures nothing tangibly stimulating, yet it delivers an important message to all!”

We all have the habit ─ particularly during lonely periods in our lives ─ of regurgitating important events in our past in a futile attempt to relive the past in the present. Yet, no matter how hard we try to recall and relive those truly vivid moments, present realities and circumstances often prevent us from truly recapturing lost feelings of yesteryears and the powerful emotions they evoke in us.

Time, fading memories, and changing circumstances are the usual barriers to revisiting the past with any real certainty. The result is that some of those iconic, life-defining moments disappear into oblivion leaving the memory dry.

So a photo, whether by the lenses of an amateur as in the case of John Mahama’s old camera man or from an expert becomes a useful aid in resurrecting the memories and feelings of the past confidence and credibility. For we all have a past, a record, a history, a story that gets lost on us in our hurry to get through the journey of life. Yet, our current circumstances and dreams (if we still have them), our identity, values and actions are defined by those lost experiences still living somewhere in the shadows of the mind.

So when the former president, John Dramani Mahama dropped one of his old photo collections on social media the other day, it sparked a world of frenetic comments home and abroad. The photo, approximately taken some 50 years ago, captures the images of three ordinary young boys (between the ages of 12-15) fronting an amateur black and white camera with measured smiles. Only John refused to smile. He looked quite shy, unassuming and even photographically timid. He wore a bushy unkempt hair that possibly hosted an army of lice.

You know those days, it was mandatory for young boys of that age to be bugged by lice. I recall how my mother used to pin me down on her lap and meticulously crushed the blood-sucking vampires joyfully in between her two thumb nails. The kind of afro hair John wore could not have escaped the notice or thirst of those little blood-sucking demons.

Clearly, the three lads were having some sort of fun ─ that is if smiling before the camera connotes having fun. For they were not eating fried rice with chicken or drinking Coca Cola and Fanta ─ the sort of delicacy that our over-pampered children are suffocated with. They were wandering among the bushes and under the trees, probably chasing rats and grass cutters or pelting some innocent birds off their perch for some lunchtime delicacy. Beyond titillating the imagination this way, the photo captures nothing tangibly stimulating!

And yet the photo has a clear message. It identifies with hundreds of thousands of young people in various corners of this country trying to accomplish little things in life from their obscure locations. This photo reminds me of the “Fulani boy” David, who rose from shepherding herds of cattle in the bush to becoming Israel’s King, Priest and Prophet.

Whoever thought that this simple photo, hosting the images of three grass cutter-chasing rascals in the bushes of Northern Region would produce a president for Ghana and a leader for the sub-region? Greatness begins with the simple things, not with the big things of this life.

The ordinary people of this world, our brothers and sisters who sell water and dog chains on the streets, our comrades who fight tooth and nail to make something out of nothing─ who struggle to pay school fees out of a pittance ─ you are the real heroes of this country.

How inspiring it would be if all the statesmen of this country inspire us with their stories instead of continually smacking our ears with hateful politics! For a picture is indeed worth a thousand words!