Thoughts of a Nima boy: My classroom response to the naturalizing culture theory 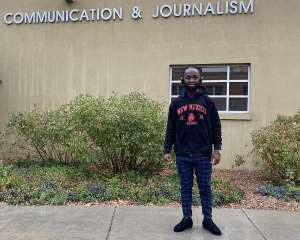 One of the courses I take in my graduate studies is Foundations of Communication Theory. This course according to the syllabus “explores the nature and function of theory across the communication discipline and its various subdisciplines. As the introductory theory course for entering communication MA degree students, it is designed to expose students to the scope and foundation of theories in communication and to help students learn how communication theories are developed, analyzed, evaluated and applied”. Thus, what we do is investigate theories enquiring about the forms, nature of communication and its impact on the individual, society and culture and vice versa.

To ensure that each and every student is up to date and on the same page during class discussions, the professor requires you to submit what he terms “response memo” to one out of the numerous theories we read in a chapter for each week that enthrals or interests you the most and react to it. As a matter of fact, I struggled in my first few weeks because I kept summarizing the theories to him which end up to be more than the required pages and nowhere close to what was required. So, he responded to me one day by saying he wants me to react instead of summarizing it. From the day I got the drift, I react to the theories with my personal experiences and my readings of African culture and life. And this has really got me good marks from the Professor and interestingly, great comments on my memos.

Last week, I chose to react to the Naturalizing Theory propounded by Donal Carbaugh. In his essay Naturalizing Communication and Culture, he addresses how language shares meanings about natural spaces. He is interested “in how nature, culture, and communication are intertwined with and implicate each other.” He wrote “communication occurs everywhere as part of natural contexts, physical spaces, and landscapes. Whether in riversides, mountain retreats, mountaintops, school-

rooms, courtrooms, living rooms, board rooms-each of these holds considerable force somewhere-or wherever, communication is radically “placed.” In this sense, communication is always situated physically, in the particulars of place and time. Also, in turn, communication everywhere creates a sense of place, of the natural, of what is affirmed as emphatically and already there. Rather naturally, communication creates senses of (what is taken to be) sheer and utterly natural

space. Communication can thus be conceived as radically and doubly “placed,” as both located in places and as locating particular senses of those places. By being within and by creating senses of places-from wilderness to Wall Street-communication helps cultivate particular ways of living

of being placed with nature, in it, as it, ways of being within the natural realm. Taken together, then, and universally, communication occurs in places, cultivates intelligible senses of those places, and thus naturally guides natural ways of living within them. This introductory and universal point also has a radically particular dimension: communication is not created the same in all natural spaces and it does not create in all such places the same senses of-or relations with-the natural realm. Communication, therefore, as in and of natural worlds, is not only located in natural places: it also locates senses of natural spaces. Moreover, it localizes-that is, it creates-senses in socially distinctive ways, in particular cultural contexts, tilling specific tropes, fertilizing particular fields.”

In my response, I had to go on a historical tangent; Africa before the coming of the wicked colonialists who distorted our ways of living, put a wedge between families, taught us corruption and for the purposes of this theory branded our interaction with nature as backward and savage.

I wrote “On an interesting note, I think I should take a future study of Ralph Waldo Emerson’s fascination with nature. The first time I would come across his name was in a speech by Martin Luther King Jr. to a group of High school students where he quoted him. Though he gave a variant of the quote, my further study revealed to me that the original quotation was “if a man has good corn or wood, or boards, or pigs, to sell, or can make better chairs or knives, crucibles or church organs, than anybody else, you will find a broad hard-beaten road to his house, though it be in the woods.”

I came across his essay ‘Nature’ where he posits that “nature’s purpose is as a representation of the divine to promote human insight into the laws of the universe, and thus to bring man closer to God.” But just as I said, I should consider him for future study about his fascination with nature in the light of knowledge and scholarship. Indeed, Nature they say is “God’s tongue.”

I am very much interested in the Naturalizing Culture theory because of the several cords it struck in me when I read it. The most profound of the cord and that which I want to dwell on because of the brevity requirement of the response memo is the unfortunate fact that we Africans had a wonderful society which had a strong bond with nature. Our fathers used to commune with trees, rocks, mountains which left the African culture as a unique and pristine one until the coming of the colonizers. Our forebearers viewed the universe (nature) as an organism (a living thing that that can develop the ability to act or function independently.) From birth the world is taught to us through culture and language. Stories are told to children, stories about nature to create a strong relationship between their sensemaking of the concepts and nature. These stories imbued in them the need to connect as human beings to nature. It taught them humanity and strong morals and pointed out to them that respecting nature is a practical consequence of the above factors. Certain African cultures have this inherent belief that there is this silence of nature which invites people to communicate with it. What bridges the gap of communication with nature is the mistaken belief that language is the preserve of humans. We as Africans then considered the sky, the earth, animals etc. as living organisms that listened and communicated. In the book Things Fall Apart, Chinua Achebe said “A snake was never called by its name at night, because it would it would hear. It was called a string.” Sad but that is the reality. The colonizers told them everything they did was primitive and backward and they abandoned that thus began the never-ending degradation of earth. Today, the world is talking about eco-friendliness in order to create a marriage between “nature and culture”. Studies are beginning to show that when we preserve nature, a sense of social justice will be restored.”

I submitted this and few hours later, the Professor responded with his marks and comments. I got all the marks. But his comments left me in a very elated state that at least, I have been able to justify the wonderful practices we had before the colonialist wrote us off as beasts who could not hold meaningful conversation. Before he dropped his comments, he stated that non-white, non-European cultural traditions are now being reflected in US communication theories and my veneration of nature is also central to Native American cultures. Then he signed off with these head-inflation words “What a wonderful, candid, personal memo. Excellent, powerful memo, Inusah.

NB: The writer is a Youth-Activist and a student of knowledge.