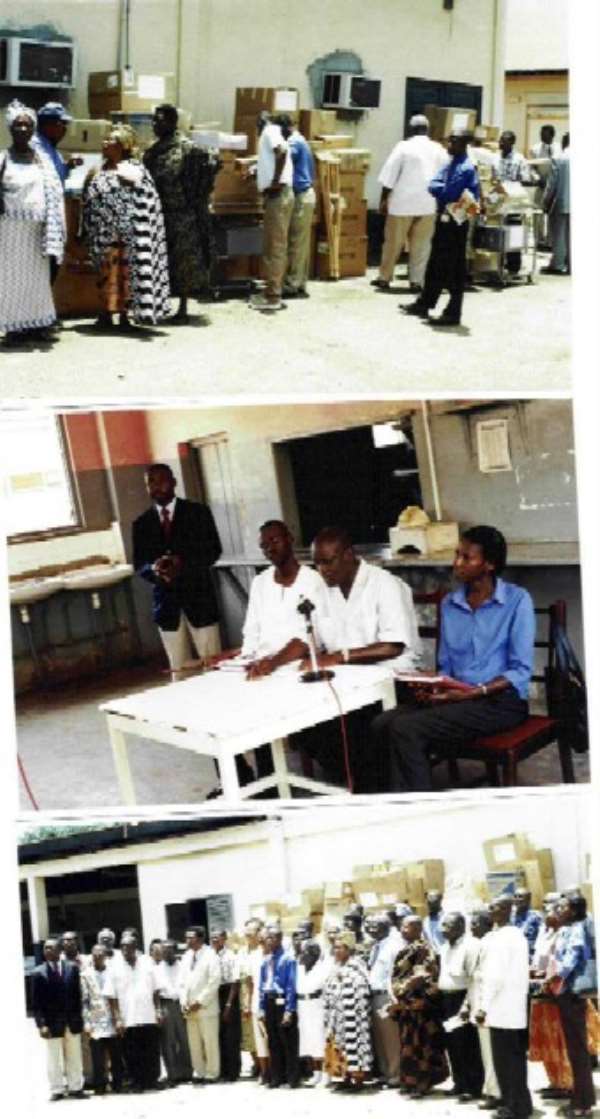 September 13,2002 was a historic day in Ghana, which will be remembered by many Ghanaians.It was the day many Ghanaians got to know of a man who is committed and has the interest and the needs of his country at heart and still continue looking for great suport for his country.All major TV stations, newspapers, radio and other media reported the event. Mr. Emmanuel Ofori, a native of Ghana who hates to see to his fellow countrymen suffering due to the love he has for his country.According to Mr Ofori in a talk he gets disturbed whenever he reads and hears about the conditions in which some of the country's hospitals are and wonders why patients escape from hospitals before they are discharged to avoid hospital bills as well as others being detained after they have been discharged simply because they do not have the money. He said during last months article on donated items,he did received over 350 emails and phone calls across the globe including Canada, Germany, Spain,United Kingdom, New Zealand, Japan, Denmark, Sweden, and across America.They were felt proud to see a fellow Ghanaian supporting not his tribe but the country.I hope you will all bear with me that a person of such nature is hard to come by. Fourteen of the calls and emails came from lab technicians, doctors, nurses and administrators of various hospitals in Ghana who are still committed to serve expressed their concern about the poor and very old and obsolete equipment being used in major hospitals. All these noble professionals appealled if Mr ofori and his Pan-African foundation could help by donateing some equipments to them.According to him,using his network to serve his country is his desire but, imaging donating on humanitarian grounds and still spending much on the donated items when they get to country's harbour does not sound good. Trully,Mr Ofori and his organization can use his net work in nine American to get the country's hospitals clean and excellent equipment such as EKG,Heart monitors, X-ray machines, etc., donated to your hospital in need.Buthe would not want to go through paying Twenty-million Cedis or more for custom and demurrage charges in Ghana for items he is donating to his country. Many of these technicians were worried what might happen in the next twenty years if nothing is done about it.Is there any way? This is the time some bottlenecks in the administration of the Ports and Harbours Authory be removed for free flow of donated items to the country. I stated in my previous article that, there are several Ghanaian and American organizations outside Ghana willing to donate just like Pan-African are doing for the country but would not like to end up paying million of Cedis for donated items. I suggested to the government working with organizations such as Pan-African Foundation and others to setup a structure in getting donated items to the country. I believe the government and the country will save ($10,000,000.00) ten million dollars or more each year instead of International loans with huge interest. Over 432 Ghanaians from fourteen countries has endorsed Mr. Ofori's proposal to see the new administration (Government) work with organizations such as Pan-African Foundation in setting up a structure for Ghanaians abroad to donate hospital equipment, computers and school supplies etc for the loving people of Ghana as done in several African countries.

Mr. Ofori said he is planning to build an eye clinic in partnership with the people of Ghana since the country do not have enough eye clinics to serve the 18-20 million people. Its unfortunate to see so many people with eye problems. He will make sure eye glasses and frames are donated freely to the people. He also plan to setup the First Ever Church Based Clinic for ten (10) churches which will commence this year including:Tesano Baptist church, Word Miracle Intentional church, Royal House Chapel, Good Shepherd Methodist church, Official Town Presbyterian church. These church based clinic will give the very poor an opportunity to get basic assistant with help from doctors and nurses volunteers from the church or outside. He hopes to spread it to other towns and villages across Ghana. I continue to urge and encourage the present administrationto take advantage of these opportunities, instead of looking for international loans with huge interest. Since Ghana is a now stimatized as (HIPC) Highly Indebted Poor Country. Pan-African Foundation is a non profit Christian relief organization dedicated to demonstration the love of Christ and preserving life by assisting the less fortunate. various hospitals, clinics and schools across Ghana. Mr. Emmanuel Ofori, a native of Ghana donated the items in support of the loving people of Ghana. He has so far donated over ($5,000,000.00) five million dollars worth of medical, dental and school supplies to mother Ghana. Really, opportunity comes but it might be once in a life time.It is time the government start working with organizations such as pan-African Foundation for Humanity to save the country some money. God bless Mother Ghana Emmanuel Ofori Pan-African Foundation Post Office Box 70277 Richmond, Va. 23255 Tel 804 755-1212 Email: [email protected] Website: www.panafricanfoundation.org