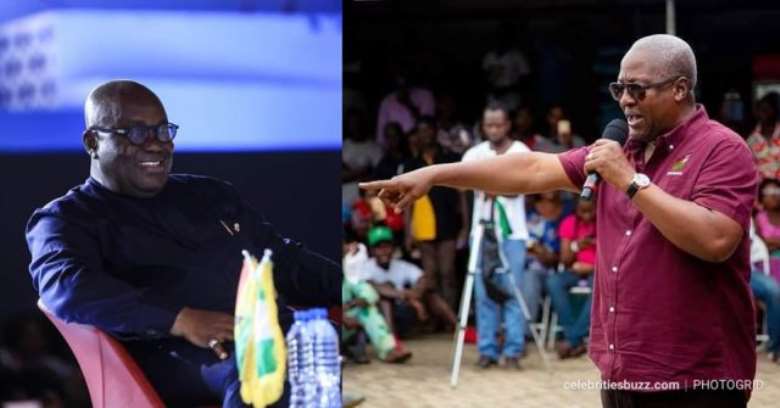 It is regrettable to capture in our history books that incendiary statements like "all die be die" and the recent " do or die affair" will be attributable to the names of prominent statesmen like President Akufo-Addo and Ex- President John Mahama for posterity to read.

Like it or not, the names of these two men will feature prominently, going into the future, in our body politics because of holding the position of highest office of the country, the presidency.

Therefore, the statements above will forever carve an image and portray them as violent to make a caricature of the immense roles they have played variously to shape our political landscape anytime they are remembered just like Nkrumah's " Ghana is free forever" which we still hear today.

In the light of the damage these statements have on the integrity of these two astute men, one would have thought such statements, even though belong to the bin, would have come from political novices or lilliputs from their respective camps and not from they themselves.

This again brings to the fore, politicians who fail to learn. The flak then candidate Akufo-Addo received in the aftermath of his " all die be die" from the camp of the NDC, even from President Mahama himself, and the impact it had on his political fortunes going into the 2012 elections sadly could not create the platform for him to learn.

It is difficult to fathom why politicians in our country fail to learn from history because if they did, President Mahama would have learnt that going into the 2016 elections candidate Akufo-Addo had had to apologise to Ghanaians in one of his campaign trails for his "all die be die" statement. Undoubtedly, he had realised how his " all die be die" statement cast on him, an image of a violent person.

It is frustrating to see as opposition leader, when you realise the institutions of state including the police are failing to deal with election related violence to restore confidence in the political system but who do we blame?

Our political landscape is replete with examples of violence in Chereponi and Ayawaso West Wuogon under Mahama and Akufo-Addo respectively all of which justice has been served piecemeal.

With the benefit of having these two men as presidents of this republic at different times, one can only ask the question 'na who cause am'?

Political attrition has defined the rule of the game of our politics. Thus, the two major political parties have sought to weaken each other when they are in power with the help of the security agencies including the army and neither Akufo-Addo nor Mahama can exonerate himself from blame on this matter.

The dysfunctional political system and its attrition hits them hard in opposition but they fail to do nothing about it in government because it works to serve their interest in the name of incumbency advantage.

Institutions of state must not only be felt but also be seen to work and not strong men as admonished by Obama if we are serious to fix this mess.

Ghanaians deserve better, if not the best. The unnecessary tension during elections is needless because it creates fear and panic which prevent people from whom politicians get their votes from going out and vote for them.