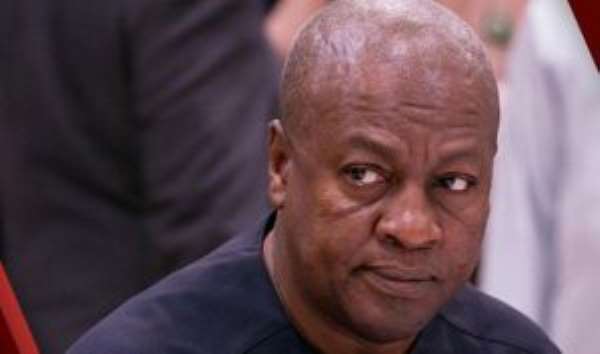 I must confess, I was not the least surprised a bit when I heard that former President Mahama has refused to render an apology over his controversial ‘do or die’ comment.

If you remember, sometime last year, the former president chose to endorse an obvious ethnocentric epistle by the MP for Bolgatanga Central, Isaac Adongo and refused to apologise following the widespread condemnations.

The abhorrently ugly article was titled: “Agyapa Royalties fraud is the last straw: The Akyem Sakawa Boys and Grandpas must go”.

Indeed, it is quite disappointing that no less a person than Ex-president could keep uttering distasteful epithets and pronouncements .

I must point out that former President Mahama’s desperation to return to power is really getting out of hands.

Dearest reader, if you may recall, Ex-President Mahama featured in the news a few years ago for wrong reasons following his unsavoury comment on the unfortunate incident which occurred during the Ayawaso West Wuogon by-election on Thursday 31st January 2019.

He is reported to have poured his heart out: “We are not going to joke in 2020, and I’m sounding a warning to the NPP – we are going to match them boot for boot. “I want to sound a caution that NDC has a revolutionary root and when it comes to unleashing violence, no one can beat us to that.”

In one of his countless press conferences during his time in office, Ex-President Mahama outlandishly went ahead frolicking by giving needless descriptive nickname to the then acting chairman of the NPP, Freddie Blay.

Unbeknownst to many Ghanaians, former President Mahama can be pugnacious. Thus I find it really difficult to understand why he has been given the appellations: ‘Humble, respectful, peacemaker etc. To be quite honest, I do not think President Mahama deserves those descriptive nicknames.

The preceding assertion may seem frivolous to many of his apologists. However, President Mahama’s seemingly condescending comments on Alhaji Dr Mahmoud Bawumia during the 2016 electioneering campaign really exposed his hypocrisy.

Apparently, according to former President Mahama, the rest of Ghanaians did not have the right to criticise him and his government because we have not sat on the presidential seat before.

Obviously, such thought process is extremely dangerous and undemocratic and should not have come from the lips of a humble president.

With all due respect, Ex-President Mahama’s ceaseless sarcasm is out of this world. He is simply not submissive.

He unkindly and lividly told them: “BALONEY”. In other words, Ex-President Mahama was implying that the Parliamentarians were engaging in “foolish discourse”. How bizarre? Humble indeed!

In fact, former President Mahama, more often than not, fails to anticipate the dire consequences of his pronouncements.

I recall during the 2016 electioneering campaign, A number of prominent Ghanaians and civil society groups, including the then Chairman of Peace Council, Professor Emmanuel Asante and the Media Foundation for West Africa (MFWA) beseeched Ex-President John Dramani Mahama to refrain from making comments deemed ethnocentric against the NPP and its running mate, Dr. Mahamudu Bawumia.

In sum, Ex-President Mahama must not and cannot keep insulting Ghanaians intelligence.