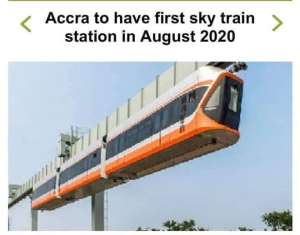 Evidence exists to the scepticism of Agenda 111. One of several hundreds of such failed promises is shared in motion and in still videos, here.

of the country and the renovation of Effia-Nkwanta Hospital. When put together, the total sum of the list doesn't add up to the claims of 111. Also, government communication is not precise with the Agenda 111 statement on the inclusion of the construction of a Western Regional Hospital to the already captured list of earmarked projects for newly created regions.

Until the evacuation and the demolition of La Polyclinic two years ago, and a promise to build a befitting General Hospital in its stead at La to serve the community and the general public, the Polyclinic was indispensable. The pomp and pageantry which characterised the sod cutting ceremony has since been drowned by one of a disappointment.

After the evacuation and demolition, the only existing structure on the premises today, is the hoarding used to prevent entry by unauthorised persons to the project site, and expected to serve as protection of the general public had the project construction begun in earnest and sincerity, which was scheduled for completion in this month of August this year, 2021.

The case is the similar, across the country. For instance, at Walewale, the capital of West Mamprusi Municipal Assembly, Vice-President Bawumia cut sod on December 16, 2019, for the construction of a 100-bed District Hospital, scheduled for completion in 12 months. Earlier that day, he also cut sod for work to begin on a multimillion dollar watermelon processing factory, with timeliness for completion by 2020. The sites of both projects today lay barren, except the clearing b of previous farmlands by heavy duty machines and erected signposts.

Since assuming office on January 7, 2017, the Akufo-Addo government has been loud in several mired scandals than in infrastructure projects. Barely a quarter into the year it took office, the new government was confronted with questions on conflict of interest and lack of transparency in a bond transaction worth US$2.5 b. What later became the Kenbond scandal, revolved around Enterprise Group and Ken Ofori Attah, cousin of Akufo-Addo, co-owner of Enterprise Group and another company, Databank.

Another leg of the contestation also later revealed, that apparently, Ken Ofori Attah, the Honourable Minister of Finance and Economic Planning, deliberately avoided the inclusion of Databank and Enterprise Group as his assets as specified in date details; in the mandatory Declaration of Assets for persons who accept the nomination for appointment as public office holders. It is not exactly clear how the Honourable Minister of Finance and Economic Planning eventually got round the change in dates to come out squeaky clean and cleared by CHRAJ investigations.

Ken Ofori Attah has also been the Minister of Finance and Economic Planning of the Republic of Ghana, since January 7, 2017. The Ministry topped the league table of Ministries which overspent way beyond budget, running into several millions of taxpayers money; in spite of an existing structure and financial accounting standards established previously.

In May 2009, the Ghana Integrated Financial Management Information System, was launched. GIFMIS is an IT-based system for budget management and accounting to improve public expenditure management processes, enhance greater accountability and transparency across Ministries, Departments and Agencies in Ghana. It came as a surprise to the Ministry, when the newly appointed Honourable Minister, Ken Ofori Attah, avoided the standards established for the office, especially his crude disposal of the services of civil servants with vast backgrounds, experience and knowledge in the Ministry.

In their place, Ken Ofori Attah transplanted his former employees from his private company, Databank and Enterprise Group, to take over the official duties of these discarded civil services who were also denied access to any official communication, correspondence or an official document. The attempt by CLOSAG and the Head of the Public Services Commission to address this hydra-headed monster met with the muzzle of officialdom, and fizzled out with the same speed as the sense of urgency which birthed it.

The Akufo-Addo government has since been rocked with serial scandals with contrasting hues of intensity. Soon after Kenbond in the same year, BOST 'contaminated' fuel got government endorsement, as Akufo-Addo used the Bureau of National Investigations to clear Alfred Obeng, CEO, BOST, of any wrong doing. These scandals graduated with each passing day, as Akufo-Addo either said he was misled or unaware.

At a point, the patience of the general public evaporated and exploded in anger, registered with the christening of the government as the Mother Serpent of Corruption, Akyem Mafia and Akyem Sakawa Boys, amongst a few sampled examples. Government has since been silent on PDS, albeit livid with the repackaging of Agyapa Royalties deal and others. The recent on radar is the Aker Energy deal, said to be overpriced by 100%.

More Opinion
ModernGhana Links
Why should religious tolerance be encourage in Ghana
Can Hemp (weed) Help In The Fight Against Corona?
Police and investigating witch-bloodletting in Ebonyi State
Benchmark value: The facts the ordinary Ghanaian should know
A Sad Day For The Environment
Medical Education In Ghana, The Preserve Of The Rich And Privileged
China and the US Competition over Africa
Ankara’s rising defence trade to Africa, is it drone diplomacy?
Why is Management Silent about accommodation brouhaha?
TOP STORIES