Planet Earth Appears Like A Pale Blue Dot, When Viewed From Space, 4 Billion Miles Away. 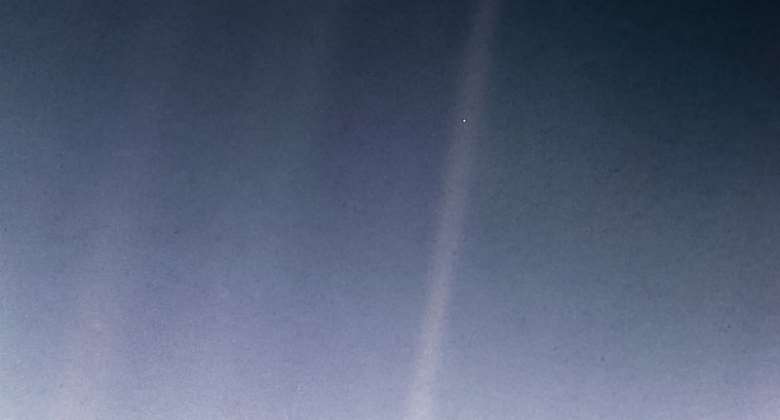 picture of the planet Earth taken from space 3.7 billion miles away by NASA's Voyager1 in 1990

Professor Carl Sagan’s pale blue dot analogy of the earth is very fascinating and I would like to share it here.

If you look at Earth, 4 billion miles from space, you see a dot.

This may not seem of any particular interest. But to us, it is different. Consider again that dot. That's here. That's home. That's us.

The aggregate of all our joys and sufferings, thousands of confident religions, ideologies and economic doctrines, every hunter and forager, every hero and coward, every creator and destroyer of civilizations, every king and peasant, every young couple in love, every hopeful child, every mother and father, every inventor and explorer, every teacher of morals, every corrupt politician, every superstar, every supreme leader, every saint and sinner in the history of our species, lived there on a mote of dust, suspended in a sunbeam.

The earth is a very small stage in a vast cosmic arena. Think of the rivers of blood spilled by all those generals and emperors so that in glory and in triumph they could become the momentary masters of a fraction of a dot.

Think of the endless cruelties visited by the inhabitants of one corner of this pixel on scarcely distinguishable inhabitants of some other corner. How frequent their misunderstandings, how eager they are to kill one another, how fervent their hatreds.

Our posturing, our imagined self-importance, the delusion that we have some privileged position in the universe, are challenged by this point of pale light.

Our planet is a lonely speck in the great enveloping cosmic dark.

In our obscurity - - in all this vastness -- there is no hint that help will come from elsewhere to save us from ourselves. The earth is the only world known so far, to harbor life. There is nowhere else, at least in the near future to which our species could migrate. Visit? Yes. Settle? Not Yet. Like it or not, for the moment, the earth is where we make our stand. It's been said that astronomy is a humbling, and a character-building experience. To my mind, there is perhaps no better demonstration of the folly of human conceits than this distant image of our tiny world.

To me, it underscores our responsibility to deal kindlier, and compassionately with one another and to preserve and cherish that pale blue dot, the only home we've ever known.

Carl was educated at Rahway high school, in NJ. He was interested in science fiction books and was an avid reader in his teenage years

After Obtaining his Ph.D..in Astrophysics, and Astronomy at the University of Chicago, Carl Sagan became a lecturer at Harvard University, and later, the Cornell University in New York.

Professor Carl Hagan, before his death in December, 1996, had pointed out three important misconceptions that we earthlings have about our universe.

First misconception.
We humans believe that our Earth, and the Universe have been created for us.

Compared to the whole universe, our planet earth is like a plum that goes around an insignificant local star, the Sun.

The local star is on the obscure outskirts of an ordinary galaxy, the milky way, which contains 400billion other stars.

This galaxy is just one of something like a hundred billion of the galaxies that make up the universe.

So, the idea that we are central and that we are the reason there is a universe is pathetic.

Some of our myths, and some of our religion is inconsistent with the real universe

It is time to change the myth and the religion.

Second misconception
Humans are unique, and the most favored species in the whole of the universe.

It would be naive for humans to assume that an unbridgeable gap separates us from the other plants and animals.

It would be wrong to assume that we are the particular beneficiaries of the concern of the creator of the universe, more than any of the 10 million other species of plants and animals on the earth.

With all of our vaunted uniqueness, it turns out that we share with other animals especially with chimpanzees our closest relatives, 99.6 percent of our hereditary material (DNA).

Third misconception
There are no other planets beyond those we have in our solar system, and that life and intelligence exist only on planet earth.

Human beings believe that there are no other planets beyond those in our own solar system, and that even if there are an enormous number of planets only ours has life and intelligence.

In the last several decades the most marvelous set of findings says indicate that planets are an ordinary and probably inevitable accompaniment of star formation. Almost every young star like the Sun in the early stages of formation, is surrounded by this flat disk of gas and dust out of which the planets were formed.

We send spacecraft to other planets like Mars to see if there are any simple forms of life. We use radio telescopes to see if messages are being sent to us by civilizations and planets of other stars.

So far although, they've met some very curious tantalizing findings in both of those approaches. We have found nothing definitive unambiguous evidence for extraterrestrial life and the debate is still open.

In our ignorance, the geocentric still find hope.