CJ Removal: Furnish us with names of committee members — ASEPA to Presidency 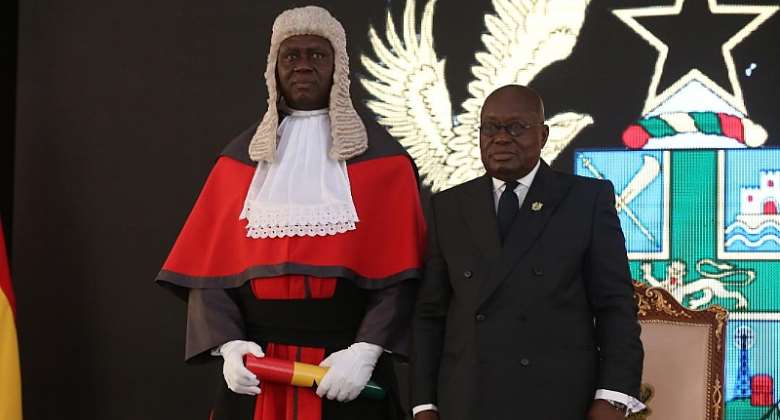 The Alliance for Social Equity and Public Accountability (ASEPA) has petitioned the President, Nana Akufo Addo to furnish the public with the names of committee members according to Article 146(6) of the 1992 constitution.

Their request follows a release from the presidency in the light of accusations and subsequent petition for the removal of the Chief Justice for engaging in misappropriate conduct that is likely to undermine the Judicial system of the country.

In a statement signed by its Executive Director Mensah Thompson, ASEPA noted that the constitution demands that the President makes public the name of two judges of the Supreme Court, as well as three members who are not part of the council of state, a lawyer or a Member of Parliament.

It indicated that Since the President has already responded to the petition by ASEPA for the removal of the Judiciary, with the suggestion that processes have been far advanced according to the constitution, it is necessary to follow due process and make the names of the members of the committee formed to sit on the case of the Chief Justice for determination publicly known.

The statement added that the constitution directs that in the case where a petition has been brought against the Chief Justice for his removal, the president shall, in consultation with the council of state, suspend the Chief Justice (Article 146(10)a). In this light, ASEPA wants the President to provide details of actions taken in respect of Article 146(10)a.

It has been alleged that the Chief Justice demanded a $5 million bribe to influence a case pending before the Supreme Court between Ogyeedom Obranu Kwesi Atta VI and Ghana Telecommunication Co. Ltd. (now Vodafone Ghana Limited) & Lands Commission. The said suit commenced in the High Court, in Swedru, which was appealed to the Court of Appeal, Cape Coast and is presently pending in the Supreme Court.

The 5 million dollars allegation raises serious concerns over the chief Justice’s capacity to be fair in the case.

It is in this light that a petition was presented to the President to invoke Article 146 of the constitution for the removal of the Chief Justice.

Although the President has responded to the petition, he is yet to fully make the details of the process known as required by the constitution and this is what ASEPA’s current petition seeks to establish.

Latest Photo Reports
Catch up with all the political quotes from our politicians.
Advertise here
More from Headlines
ModernGhana Links
IEA charges gov’t to work with BoG to tackle key drivers of inflation
UPDATE: KNUST confirms nine vehicles of staff destroyed in Katanga-Conti clashes
Ken Ofori-Atta has defrauded the nation; he must be arrested, prosecuted – Arise Ghana
TOP STORIES

The more we sink into debt and become poorer, the more money...
45 minutes ago