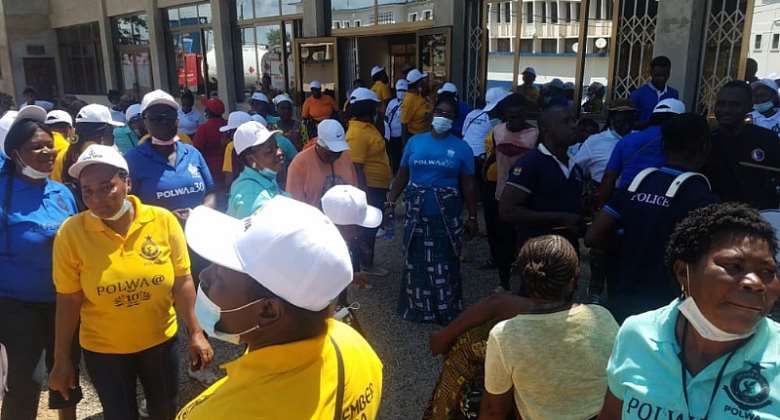 The president of Police Wives Association in the Central region has complained bitterly about their struggles in finding a place to stay after the death of their husbands in line of duty.

According to Mrs. Comfort Twimagley, who is also the President for the Central regional arm of Police Wives Association (POLWA), their lives have become very challenging after their husbands who were serving the nation in various capacities tragically lost their lives on duty.

The association is therefore appealing to the government to replace their lost husbands with their children to fill the gap that was left in their lives and to give them a source of income.

According Mrs. Comfort, this practice is not new because in the past, when a government worker loses their live in line of duty, they were replaced by their children. This ensured that the family does not struggle to make ends meet.

They are therefore appealing to government to bring the practice back, by replacing their lost husbands with their children in the police service.

“Where to sleep is one of our biggest challenges since we were living with our late husbands in rented houses. Most of us have been sacked because of our inability to pay our rent” she cried out.

Currently, there is no law that directs government to replace a deceased government worker with their children or other relatives.

However, inheritance laws and policies exist to ensure that when a service person dies in their line of duty, some benefits are accrued to family.

In addition, depending on who is named as beneficiary in case of death, the family can have access to the pension and social security of the deceased, as well as other policies arranged when the deceased was alive.

Latest Photo Reports
Catch up with all the political quotes from our politicians.
Advertise here
More from Article
ModernGhana Links
Why youth apathy in elections bodes ill for Kenya
Ghana Council Of State Member Caught In Corruption Scandal - OSP Retrieves 1 Million Cedis - Lessons And Solutions For Conflict Of Interest
Intergenerational Solidarity: Creating an Equitable World for All Ages
TOP STORIES