Cameroon Anglophone separatist 'supporters' in US charged with gun smuggling 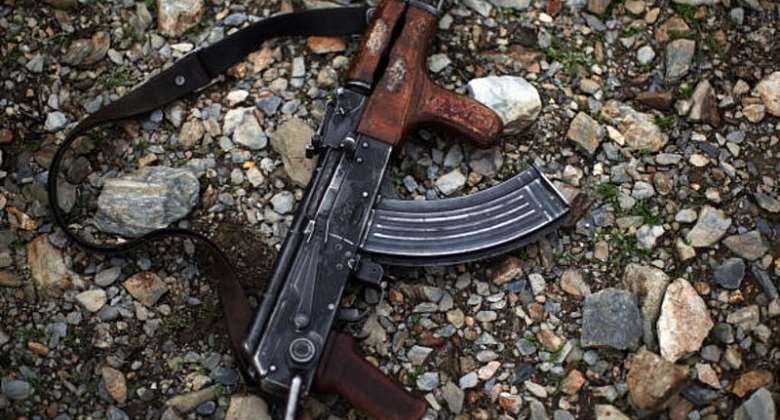 Three US-based Anglophone Cameroonians have been charged with gun running and conspiracy following the seizure of a weapons cache by US authorities. The suspects, some who appear to support the Anglophone separatist movement in their country of origin, could be implicated in an effort to supply high-grade weapons and ammunition to fighters battling Cameroonian government forces.

The three cases in the US federal court system involve a navy reservist, a healthcare attendant and a healthcare business owner.

Each case involves alleged shipping or attempting to ship weapons and military goods from the United States to Nigeria, including ammunition, without an export license. The other charge includes conspiracy to ship weapons.

The US Bureau of Alcohol, Tobacco, Firearms and Explosives (ATF) seized military-grade weapons and military equipment from two shipping containers and two different homes between May and August 2019.

According to the affidavit from an ATF agent, 131 orders from two online gun retailers were shipped to a home in Rosedale, Maryland in the US between March 2018 and March 2019. The large number of items was flagged by ATF, along with other information, leading to a search of the premises.

Tamufor Nchumuluh St Michael, the resident and homeowner, was not present during the search, but turned himself in less than a week later in 2019.

Nchumuluh, who is originally from Cameroon, is a naturalised US citizen and a US Navy reservist. His case, which documents the 80 pieces of equipment, including high calibre rifles, a silencer and firearm parts and accessories that were seized from his home.

He had already been accused of converting shipping high-powered AR-15s and AK-47s, according to press reports in 2019.

A number of businesses, including a community youth soccer organisation, a restaurant or catering business, and the “Palm Tennis International Federation” is registered at his address. It is not clear whether these US-registered businesses are connected.

Since this was the first federal case in the affair, the judicial proceedings are to be handled out of the federal courts in Baltimore.

Both Nchumuluh's lawyer and the US Attorney's Office handling the case declined to comment.

Another defendant in a related case, detailing the same exhibit list of 39 firearms, 45 gun magazines of various calibres and at least 39,000 rounds of ammunition, will go in front of the judge at the end of June.

Edith Ngang, an Anglophone Cameroonian and naturalised US citizen, has also been hit with exporting guns without a license charges and conspiracy.

The nurse and healthcare business owner is a mother of four who lives in Minnesota and does not have a criminal record, nor are there other charges involved, according to her lawyer.

“There are no terrorism allegations in this case,” Kirk Anderson, the lawyer acting for Ngang, told RFI. “The Cameroonian government in not involved in this case either."

Recent reports in the Cameroon francophone media depict the charges a move by the Cameroonian government, calling Ngang a “terrorist”.

Her case, while connected, appears as an accessory to the Nchumuluh case. The two residences where guns were seized are not hers.

However, the court documents state that she reloaded ammunition in the basement of a home in Maryland.

It also details a series of coded WhatsApp messages, exchanged at the time, purportedly showing that the weapons would be concealed in a truck that she owned and put into a shipping container for Nigeria.

“I wanted to say that the title of the truck needs to be changed out of my name before we can ship it. I have it here. Who will I transfer it to and how fast will a new one come?” is one message allegedly written by her and cited by court documents.

Ngang's uncle, Augustine Ambe, a videographer and member of the diaspora Anglophone community in the US, attested to her generous spirit and her activism in the Anglophone separatist cause.

He stressed that she has always been vocal at fundraising events to encourage people to contribute aid to Anglophone Cameroonians who are still under assault in the North-West and South-West regions of Cameroon.

In addition to her healthcare business, she also has links to a number of US-registered companies that had operated from her home in Minnesota.

This includes Ambazonian Women for Independence, which is currently inactive, according to a search on company records by RFI.

Additionally, one of the addresses in Minnesota where ammunition was confiscated, is also listed as an address used by a company called Ambazonia Public Affairs Committee.

“She's very vocal about the injustices that the people in Southern Cameroons have been going through over the years,” Ambe tells RFI, referring to the historical name the separatists call the two Anglophone regions of Cameroon.

Cameroon's Anglophone crisis began in late 2017, when professionals, including teachers and lawyers, peacefully protested on the streets of Bamenda, the capital of North-West Cameroon.

Anglophones were angry about the perceived marginalisation by the Francophone ruling majority, especially over the use of French in the legal and education systems.

Their protests were violently quashed by Cameroonian security forces, which propelled some Anglophone separatists to take up arms against the security forces, later making a self-declaration of independence.

“The community is very traumatised – we see pictures of refugees in Nigeria and internally displaced people,” says Ambe.

“What the community has done, whenever we gather, we contribute money and support,” he says, referring to the diaspora community in the US.

“We have a lot of refugees in Nigeria – that's mostly what the effort has been,” he says, referring to the more than 65,400 Cameroonians who have fled violence, according to UNHCR.

There is no indication that these alleged shipments were intended for refugees. Nor is it clear who was the intended recipient of these weapons, allegedly slated for shipment to Nigeria, which borders Cameroon's North-West and South-West regions.

Separatist weapons not from diaspora

The weapons used by separatists in Anglophone Cameroon are typically poached or stolen from the Cameroonian security forces, according to Arrey Ntui, Cameroon analyst for the International Crisis Group, a non-governmental organisation working on conflict resolution and prevention.

“The majority of weapons in the keep and use by pro-Southern Cameroons independence militia appear to have come local Cameroonian sources,” says Ntui.

While Anglophone Cameroonians in the diaspora have contributed to humanitarian causes for other Cameroonians as well as remittance payments, only small groups of separatist militia have exclusive attachment to single leaders abroad, says Ntui, indicating that separatists are not being controlled or manoeuvred by those outside of the country.

“Ground fighters appear less willing to blindly obey those abroad,” he says, noting that local actors ignore a lot of the quarrelling between overseas leaders as they are focused on the situation at hand.

Supporters of Anglophone separatists have previously been involved in innovative schemes to raise money for the self-declared state of Ambazonia, notably a cryptocurrency called AmbaCoin.

The third related case of gun running without a license and conspiracy involves Alambi Walters Muma, who identifies as a member of Southern Cameroons National Council (SCNC), an Anglophone Cameroonian political organisation.

Muma, a registered home health care assistant in the US, according to information seen by RFI, will be arraigned the day after Ngang on 1 July.

Neither Muma's public defender nor the US Attorney's Office would comment on his case.

All three cases are federal cases, and both charges are felonies.

Conspiracy charges carry a maximum possible sentence of up to five years, according to law firm Wallin & Klarich, as well as a fine of up to $250,000.

Unlawful export of defence articles carries a maximum sentence of 20 years in prison, and a fine of up to $1 million, says Cornell Law School's Legal Information Institute.