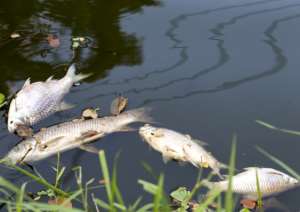 The maximum amount of oxygen that you can dissolve in water depends on several factors, including the water temperature, ambient air pressure, and salinity. But the maximum amount of dissolvable oxygen, known as the “saturation concentration” is typically around 7-10 milligrams of oxygen per litre of water (7-10 mg/L).

This dissolved oxygen is what fish use to breathe. Fish take water in through their mouths and move it through their gills. Gills, like our lungs, are full of blood vessels. As water passes over the thin walls of the gills, dissolved oxygen is transferred into the blood and then transported to the fish’s cells. The higher the oxygen concentration in the water, the easier it is for this process to occur.

Once in the cells, the oxygen molecules play a key role in the process of “aerobic respiration”. The oxygen reacts with energy-rich organic substances, such as sugars, carbohydrates and fats to break them down and release energy for the cells. The main by-product from this process is carbon dioxide (CO₂). Therefore, we all need to breathe in oxygen, and we breathe out carbon dioxide. Fish too do the same.

Biological Oxygen Demand
Like fish and man, many bacteria get energy from processes of aerobic respiration. Therefore, if there are organic substances in a waterway such as rivers etc, the bacteria that live in them can consume them. This is an important process of “biodegradation. This is why our planet is not littered by dead bodies of animals that have died over thousands of years. But this form of biodegradation also uses oxygen, which comes from dissolved oxygen in waterbodies

Waterbodies can replenish their oxygen from contact with the air. However, this is a relatively slow process, especially if the water is stagnant (flowing creates turbulence and mixes in more oxygen). So, if there is a lot of organic matter present and bacteria are feasting on it, oxygen concentrations in the water can rapidly decrease.

Biological oxygen demand (BOD) is therefore a measure of the quantity of oxygen used by microorganisms (e.g., aerobic bacteria) in the oxidation of organic matter. Natural sources of organic matter include plant decay and leaf fall. However, plant growth and decay may be unnaturally accelerated when nutrient and sunlight are excessively abundant due to anthropogenic influence. Urban water run off carrying pet wastes from streets and roadside; nutrients from lawn fertilizers; leaves, grass clippings, and paper from residential areas, are all contributors to increase oxygen demand.

The increasing oxygen consumed in the decomposition process deprives other aquatic organisms of the oxygen they require to live. Therefore, organisms that are more tolerant of lower dissolved oxygen levels may replace a diversity of natural water systems contain bacteria, which need oxygen (aerobic) to survive. These organisms are part of decomposition cycle and they feed on dead algae and other dead organisms.

Let us take a more complete look into the oxygen cycle in aquatic systems. At beginning of the cycle, algae and other producers in the water take up inorganic nutrients and use them in the process of building up their organic tissues. Consumers like fish and other aquatic animals eat some of the producers, and the nutrients move up the food chain. When these organisms die, bacteria decompose the organic compounds and release into the water inorganic nutrients such as nitrate, phosphate calcium, and others. Some of these nutrients end up at downstream or in sediments, but most of them recycle again and again. Most of the bacteria in the aquatic water column are aerobic. That means that they use oxygen to perform their metabolic activities of decomposition. Natural levels of oxygen in aquatic systems are always somewhat depleted by normal levels of aerobic bacterial activity. In most cases, if dissolved oxygen concentrations drop below 5 parts per million (ppm), fish will be unable to live for very long. All clean water species such as trout or salmon will die well above this level and even low oxygen fish such as catfish and carp will be at risk below 5 ppm.

When abnormally high levels of aerobic bacterial activity take place, however, the level of dissolved oxygen can drop dramatically. Under what kind of circumstances does such change happen? Generally, these abnormal bacterial activities occur when there is some sort of abnormal "pollution" introduced into the system. This can occur in the form of organic pollution for sources such as domestic sewage, septic tank leakage, and fertilizer runoff, or could be in the form of inorganics from domestic or industrial sources such as contaminated man-made products. Natural sources of organic compounds can also come into aquatic systems by means of floods, landslides, and erosion.

Oxygen Reduction and Fish Kills
Dissolved oxygen levels depend on temperature, water depth and water movement. In almost any aquatic environment, fluctuations in natural nutrient cycles can create imbalances which lead to oxygen reductions and fish kills. Generally, these fluctuations are difficult or impossible to predict, but high high nutrient levels from pollution run offs.

As nutrients accumulate in the water, some end up directly in the bottom sediment but most go into solution in the water column first, where they are used by plants and animals. The most abundant plants in a well-managed water body are found in the algal bloom. Suspended in the water, these microscopic single-celled plants are sometimes referred to as phytoplankton. Except for situations where excessive vegetation is present, most nutrients dissolved in the water are taken up by the algal bloom.

Algal Blooms and Oxygen
Like all green plants, phytoplankton produce oxygen during the daylight hours as a by-product of photosynthesis. This is usually a major source of oxygen in water bodies. In darkness, however, all plants consume oxygen, including phytoplankton. Blooms in natural water bodies normally produce much more oxygen in the daylight than they consume during the night, but some situations reduce the amount of oxygen a bloom produces without reducing its night-time oxygen consumption.

Trace minerals or nutrients needed by the algal bloom are occasionally used up. This usually results in some, or occasionally all, of the phytoplankton dying back temporarily. This is probably the most common cause of phytoplankton die offs, especially for heavy blooms with competition for light and nutrients. When a large portion of the bloom dies off at once, bacterial decomposition and the loss of normal oxygen production can lead to oxygen depletions and fish kills.

Blooms respond to changes in the weather. Photosynthesis slows down under cloudy conditions, and, as a result, oxygen production decreases. Extremely calm days may also reduce photosynthesis and oxygen production, even under sunny conditions, by preventing phytoplankton in the middle layers of the pond from mixing near the brighter surface. In summer, oxygen problems may arise because of a simple physical property of water. The warmer the water, the less dissolved oxygen it can hold. When a dense bloom produces a surplus of oxygen on a summer afternoon, the oxygen will not stay in solution and escapes into the atmosphere. During the night, the bloom attempts to take more oxygen out of the water than what remains from daytime photosynthesis. When this occurs, dissolved oxygen levels approach zero. Fish begin to suffocate in the water, and aeration must be applied to meet the demand for oxygen and prevent fish losses.

Many waters also experience oxygen problems in early spring. As the water warms and the amount of sunlight increases, algal species which predominated in the bloom during the winter die back, and other species more suited to summer conditions multiply and replace them. When this process proceeds gradually, conditions remain stable. Occasionally, however, the winter bloom dies off abruptly and insufficient oxygen levels may occur for several days.

This type of oxygen depletion may kill some fish directly or cause sufficient stress to weaken their immune systems. Bacterial infections usually occur within the next several days to two weeks. Various signs, such as colour and odour changes or a build-up of foam on the downwind bank, can sometimes be useful in anticipating when a winter bloom will die back.

This situation can lead to physiological stress, reduced fish growth and even fish kills if bottom waters are mixed too rapidly with the rest of the water. This type of mixing, referred to as a turnover, occurs when cool rainwater or heavy wind on the water surface breaks down layering patterns. Turnovers are often observed in natural waters in the autumn or spring after severe weather disturbances. The potential for a turnover can be detected by an increasing temperature difference between a water’s bottom layers and its surface waters.

Response Options - Aeration
Once under way, oxygen depletions are easy to recognize. Partial depletions can be recognized by fish hanging at the water surface during the early morning hours. Lethal oxygen depletions begin with similar symptoms. Fish congregate at the water surface, gulping air. During the early minutes of the depletion, they may dive when disturbed and return to the surface. As conditions worsen, they will ignore most disturbances and continue gulping.

Flushing with clean, aerated water will help improve water quality, which depend on runoff as a water source.

Fish Kills from Chemical Contamination
Fish kills resulting from chemical contamination generally take one of two forms: direct poisoning of the fish by toxic pollutants or oxygen depletion resulting from poisoning of the algal bloom. Application of agricultural chemicals to croplands which run off into the waterways must be practiced with great caution. Direct poisoning may be involved if small fish die before larger fish of the same species.

The significance of Chemical Oxygen Demand
High chemical oxygen demand in water indicates greater levels of oxidizable organic matter and consequently, a lower amount of Dissolved Oxygen (DO). Critical DO depletion due to organic contamination can kill off aquatic life forms.

What is the difference between COD & BOD?
Many people tend to confuse these two metrics since they are used for the same purpose – to find out the degree of water contamination. However, unlike BOD, COD measures all oxidizable matter in a sample of water, and not just organic compounds. Thus, BOD is typically lower than COD for the same sample.