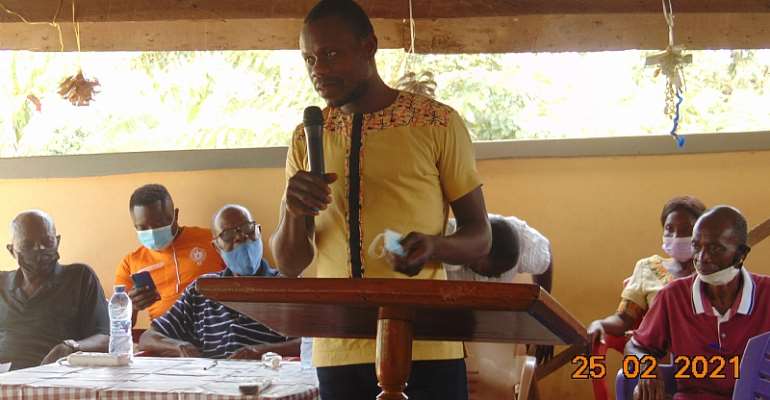 The Cocoa Health and Extension Division of Ghana Cocoa Board, Hohoe-Kpeve Cocoa District in the Volta Cocoa Region has on Thursday, 25/02/2021 held Cocoa Farmer Rally on Environment, Child Labour and Gender Issues at Nkonya Wurupong in the Biakoye District of the Oti Region.

Speaking at the rally, the District Cocoa Officer, Mr. Emmanuel Ofori said, “the District has begun Cocoa Rehabilitation Programme. Under this programme, CSSVD infected farms, as well as over-aged farms, will be cut, replanted and maintained for 2 years by COCOBOD with the support of the farmer before handing over fully to the farmer.

In addition, compensation package of GHS 1,000 if the affected area is 1 ha. If less, it will be determined by a ratio of 1 ha. He added that, “aside the compensation package, plantain suckers, economic trees and other food crops will also be planted during the replanting of the cocoa farm. Farmers can derive extra income from the sale of food crops planted. He encouraged farmers in Nkonya Operational Area to take advantage of this programme to get their old farms rehabilitated.

On Child Labour, Mr. Ofori further stated that “Children below 18 years should not be used in any work that may be harmful to their health, safety or deprive them of education; work that is not in the interest of the child”. Worst forms of Child Labour in Cocoa Sector such as “use of dangerous farming equipment, e.g sharp cutlass for weeding; carrying heavy cocoa beans; use of dangerous chemicals in spraying; breaking pods; picking of pods should all be avoided. This practice may lead on the part of the child to lack of education, poor emotional instability; poor health and outbreak of disease; loss of morals; denial of rights of the child and condemnation of life-long poverty, he added.

On Gender issues, Ms. Lucy Dagba, a CEA explained that, women in cocoa growing areas must be empowered to rectify gender anomalies and give more consideration and support to women . She added that, women are actively involved in stages of cocoa production such as nurturing the seedlings, weeding of cocoa farms, planting of inintial shade crops, harvesting and breaking of pods, fermentation and drying. Empowering women will make them “self-confident-assume decision-making and leadership roles as well as participate actively in public life, exposure to new information and technologies and independent- to become self-reliant” she stated.

The Chairman of Nkonya Wurupong Yonkodor Cooperative Cocoa Farmers and Marketing Society Ltd, Mr. Gilbert Yeboah appealed to COCOBOD officials to help them “with mechanized bore-holes for irrigation purposes in the cocoa farm”. He was happy with the work of the CEA of the Operation Area, stating, the “we are satisfied with the effort he is putting up”. Mr. Yeboah further appealed that, “most farmers in the Operational Area are unhappy because their cocoa beans purchased since December,2020 has still not been paid by PBC agents in the area, and appealed to COCOBOD to solve the challenge”.

Responding to the irrigation request, the District PEP Coordinator, Mr. Hamidu assured the Chairman that, the District has selected three places for irrigation, and may consider Nkonya OA in the nearest future.

The CEA for the area, Francis Eshun, thanked the various communities in Nkonya, for being able to come together to form five Cocoa Farmer Cooperatives respectively in Nkonya Wurupong, Nkonya Ntumda, Nkonya Tayi, Nkonya Ahenkro and Nkonya Asakyiri. He also thanked the Co-operatives for their support in organisation of the rally, and appealed to every cocoa farmer in Nkonya to belong to their respective Co-operatives to ensure effective extension delivery. He further stated that, “cocoa farmers should adopt the monocropping -cocoa farm should not be mixed with other heavy feeding crops such as cassava and other crops. With exception of plantain or cocoyam or economic shaed trees, all other crops must be avoided in cocoa farms, especially newly established farms. This will ensure the cocoa trees get the maximum nutrient needed for it to be productive” he stated. He also stated, “very soon, bee keeping training will be organized as Alternative Livelihood to help cocoa farmers in the OA.”

The CEA for Nkonya Bumbulla, Mr. Ben, appealed to the farmers to avoid the excessive cutting down of trees for wood. “If you don’t control the rate at which you are cutting trees, it will affect your cocoa” he stated.

The Assembly Member for Nkonya Asakyiri, Hon. Emmanuel Visu appealed that, communities such as Nkonya Asakyiri, Nkonya Tayi and Nkonya Kadjebi have lands in conflict zone in the area and appealed to government to help settle the problem so that, the communities can go back and farm peacefully. The Assembly Member appealed for government to prescribe punishment for people who set fires indiscriminately during dry seasons, thereby destroying cocoa farms. He encouraged the Cocoa Farmer Cooperatives to remain resolute and work hard as they have been doing to help fight poverty in the area.

Ending the programme, the District Cocoa Officer, Mr. Ofori assured farmers COCOBOD is doing everything possible to ensure Cocoa Farmers are given a better life. “Cocoa Management System will soon be launched in the District, and every cocoa farmer should avail him/herself as this will help solve a lot of problems in the buying and payments of cocoa beans”. He also stated the much awaited Pension Scheme will soon begin after the Cocoa Management System. 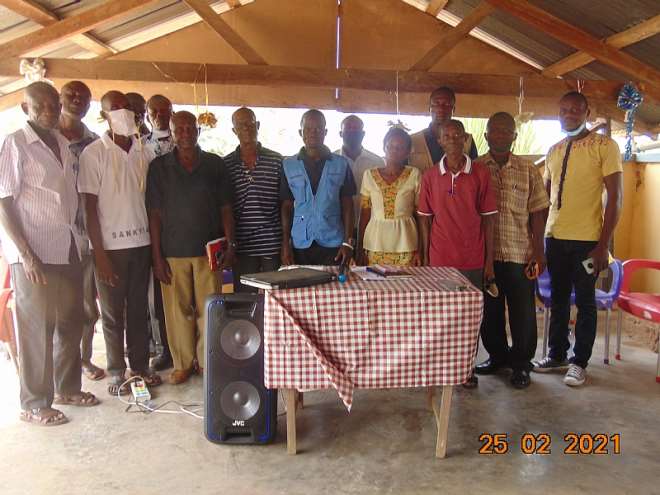 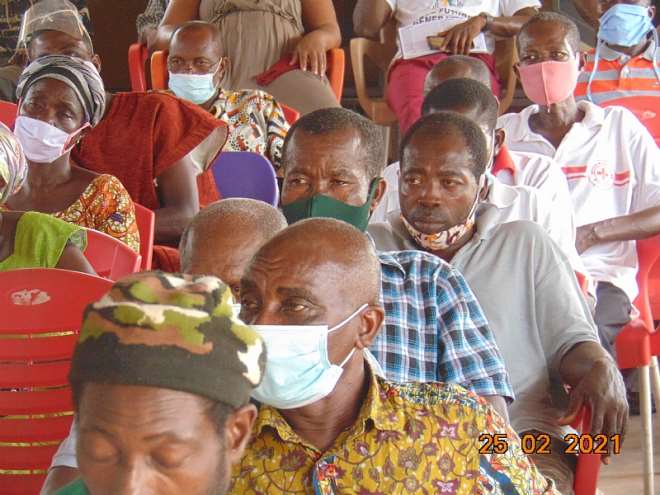