Darkest Humanity Diaries... When Death Stares At You: Fear Of The Unknown -No Bed Syndrome In Our Hospitals 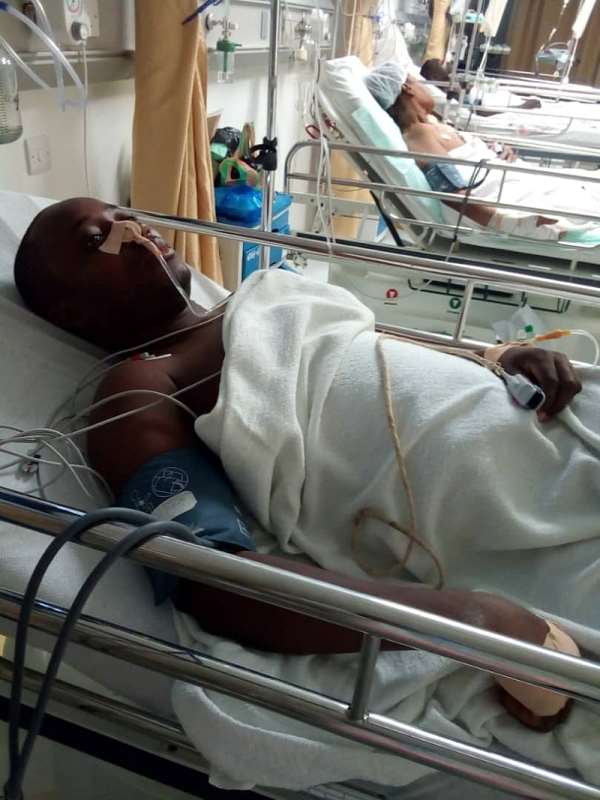 Dear Diary: Tuesday 16 February 2021 - all seemed fine and well; and I retired to bed at night. Few hours later, I woke up to a new awakening - all is not well!

There was an excruciating pain in my stomach. Thinking it's one of those tummy-aches that goes away after a while, I managed to clock some more sleep. But again and again, I woke up to the same pain. Pain, pain, pain!

In the morning, I took some magacid as first aid. I followed it up with Fragile (metronidazole), but alas, nothing worked. At midday, my partner called a taxi cab to take me to a hospital in my neighborhood.

I was admitted and immediately put on some medications through infusions. After a while, the pain began to subside. Whilst still on admission at the local hospital, the pain was recurring.

Next day (Thursday), a scan was done on my tummy. We were later called to the doctor's office. Then came the news I dread the most: "Referral!"

Doctor explained that there were some serious problems that require urgent specialist attention. For that matter, he was giving us a "referral."

For whatever reasons I can't tell, the word "referral" has become synonymous to "No Bed" in my ears/mind, especially when our 3 main referral hospitals are mentioned - Korle-Bu, 37 and Ridge.

The most recent case of "no bed syndrome" I read about was from a Radio/TV Presenter Benjamin Akakpo (Joy Prime). Benjamin happens to be a friend, so I was really scared when I read his encounter with "No Bed Syndrome."

Another one of recent memory is of a gentleman by name Kofi Nti Boateng, a Ghanaian based in the UK, whose brother departed in similar circumstances of "No Bed Syndrome" in some hospitals in Kumasi. A brother he was expecting to join him shortly in the UK!

So I guess you would understand why I was beginning to feel uncomfortable - fear of the unknown!

My partner ruled out 37 (I've my own reservations about 37 ever since my bad experience there in 2003, and it has been a no-go hospital for me ever since). My partner then said Korle-Bu was too far away. So she opted for Ridge. I was so quiet at this moment. A lot was going on in my head - sober reflections! Thursday night I couldn't sleep - pain, thinking, fear - fear of death!

There was an audio that was shared widely few years ago. About a Ghanaian woman resident in the UK. One night in Accra, she kept transporting her seriously sick brother from one hospital ("No Bed") to the other (all 3 of our referral hospitals included), till the brother passed on in the vehicle in the early hours of the morning. I listened to that audio many times, with tears.

Friday morning, as we were getting ready to leave for Ridge Hospital, I told my partner to call one Dr Emmanuel Addipa-Adapoe, and tell him that his ODADE3 brother is on "referral" to his place.

Dr Emmanuel was off duty, but assured us we should go, and that emergency doctors were on duty. However, should we encounter any difficulty, we should call him. The message from Dr Emmanuel was reassuring. It offered me some assurances against my fears.

Grace found me! Everything was just timely and perfect. Within an hour or two arriving at the Ridge Hospital, I was on my way to the theatre - Surgery! What went on during my operation, is a matter for another day, or book. I finally succumbed to the surgical knife! God bless the team (Doctors) that operated on me; and all the nurses!!

As I was brought out of the theatre, I heard the nurses making phone calls checking on the availability of beds at various wards.

Later on in the night, there were further phone calls by the theatre nurses to check on availability of beds at the wards in order to move patients like me who had come out of theatre and are in a stable condition. It was now proving difficult for the nurses to locate empty beds. My fears of "No Bed" was unfolding right under my watch. I was fortunate to have made it through just at the right time! Indeed, grace found me!!

On Sunday morning, the leader of my surgical team of doctors came to review my condition. And I made a passionate appeal to him:

"Please doc, may I please plead for mercy; for me to be discharged at the earliest opportune time." I explained that some discharge bills that have come in have been very scary.

As at Sunday, a patient in my room who was discharged on Friday was still around because they couldn't afford to settle his final bill. His bill was in excess of four thousand Ghana Cedis, even though they paid for every drug he was administered. He was admitted on Monday and discharged on Friday.

Following my humble plea, the doctor said I could be discharged the next day (Monday). A nurse was having discussions with patients and others in my room. The nurse said: "Healthcare is the most expensive sector in the country, followed by education."

There were several instances of which I could have written dozens of articles, but for patients not allowed access to their phone. It was like a hunter who suddenly finds himself in the midst of wild animals in the forest, but without his gun. Phone restriction was in order though, as there were cannula on both of my hands.

It's been a painful but humbling experience, and I could write volumes about my having to finally go under the surgical knife; something I had been escaping for two decades now (my immediate family and close friends know that I've been admitted to Surgical Wards a number of times here in Ghana and the UK). I guess I'll leave that for another time, or another book. Grace found me!

A word of gratitude to ODADE3 98 for paying for almost all (about 70%) of my medical bill at the Ridge Hospital. I'm exceedingly grateful to the ODADE3 fraternity! But in my moment of gratitude, I just wish everyone not on a solid ground can have such a brotherhood as The ODADE3!

And for the masses out there who may not have been fortunate enough to be Old Students of PRESEC-LEGON, who would come to their aid in an emergency like this? There was one such patient in my room, next to my bed.

From his looks, he's one of our brothers from the North who has migrated to the South in search of greener pastures, and I've no doubts he's into "Abossey Okai, Agbogbloshie or Kantamanto kind of business." Every time I looked at him, I was filled with sadness! I just can't stop thinking about him.

As the nurse came to pack plenty of my medications (drips) as returns for some form of refund, I felt like giving all to "my brother" next to me. But I was also being weighed down by my own needs, as I now have new prescriptions to buy to begin my orals; and my impending final bill.

Upon my discharge, I sent my specimen to the Ghana Standards Boards/Authority for examination as requested by my surgical doctors. The cost is GHS 300. For "my brother," if God willing he pulls through at the hospital, specimen to the GSB at such high cost will be least of his worries. I'm fortunate to be home recuperating, how about him? Has he got a home?

For now, all I can do is remember him in my prayers, it's not prayers he needed most though...

On discharge, my neighbour (Big Brother Sam) used office vehicle (WAEC Urvan Bus) to transport me home. The few of the many things that I'm so fortunate and grateful and thankful for. But every now and then, I asked myself: what about him ("my brother")?