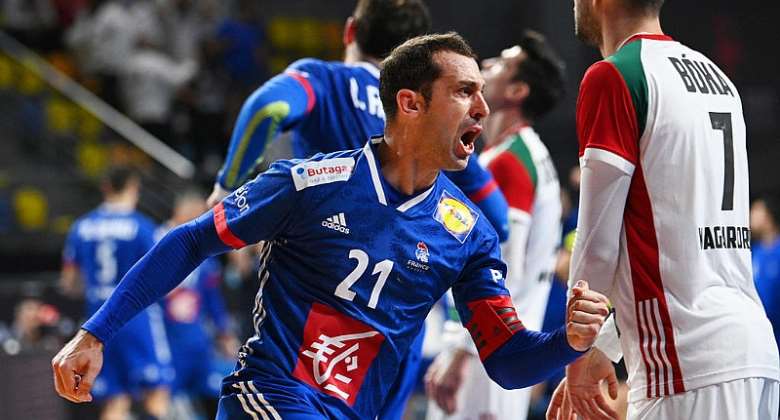 France skipper Michael Guigou hailed his team's fighting spririt after they overcame a disastrous opening 10 minutes against Hungary to advance to the last four of the men's handball world championship in Egypt.

“We won, it's the most important thing,” Guigou said following the 35-32 extra time victory at the Dr Hassan Moustafa Sports Hall in Giza.

The France skipper hailed his team's gallant efforts to make the last four of the men's handball world championship in Egypt.

“Despite making a bad start, the most important thing was to win, there is nothing more important to say.”

Hungary led 7-1 after 11 minutes but France, seeking a record-extending seventh world title, clawed their way back.

They led for the first time 10 minutes into the second half when Valentin Porte scored his third unanswered goal in a row to give France a 20-19 advantage.

Sloppiness
With five minutes remaining, Dika Mem sent France into a 30-27 lead but sloppiness allowed the Hungarians back to 30-30 and force 10 minutes of extra time.

Though Hungary nudged a goal ahead, France surged again to complete the victory.

France will face Sweden - 35-23 victors over Qatar - on Friday at the Cairo Stadium.

“It was a big fight,” said Hungary coach Istvan Gulyas. “At the end of the regular playing time the draw was well deserved for both teams.

“Our players fought very well and gave more than 100%, I am very proud of them and congratulate them.”

Resurgence
France entered the tournament out of form and unfenced as potential champions. But displaying grit, guile and no little panache, they have  won all seven of their matches in the preliminary round and main round.

“Hungary played very good at the beginning of the game and it was tough to find a way back to victory,” said Gille.

“We are very proud of this game because it has allowed us to reach the semi-finals and play for medals.”

Should France get past Sweden, they will play Spain or the defending champions Denmark in the final on Sunday.