Vigilante group hunt for homosexuals in parts of Accra 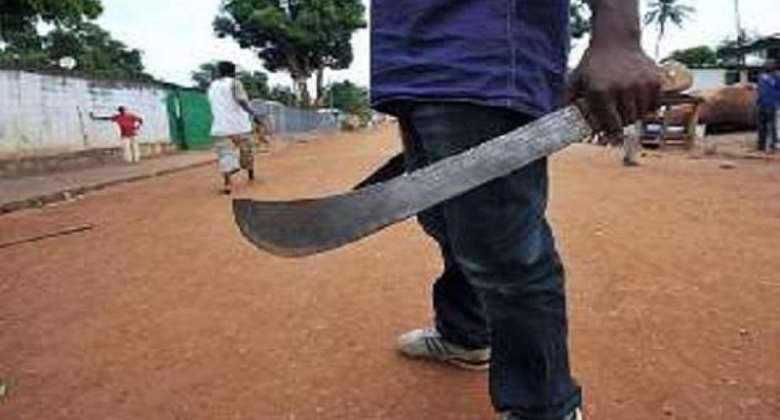 The Safety Empire vigilante group and its affiliate bodies have embarked on an operation in some parts of Accra to flush out homosexuals.

The operation "Make Ghana a Hell for Homosexuals" that took place on Sunday January 24, 2021 was not only aimed at crushing homosexuality but to also deter others from towing what they described as satanic and abominable path.

The modus operandi for the operation was to identify, attack, capture, punish and shame anyone suspected to be a homosexual.

The exercise brought together four different watchdog groups in Nima, Madina, Ashiaman, Adenta, Ashale Botwe, Kasoa amongst other communities where gay practice is suspected to be on the high.

At Nima, the groups stormed a house in search of one, David Alad who was alleged to have granted an interview to a media house in which he condemned the way and manner gay practitioners and their supporters were tortured and humiliated by the so-called vigilante bodies.

David Alad, who is an artist, incurred the wrath of the vigilante group, the Safety Empire with his statement. He has been on the group's wanted list for some time now despite several attempts to track him down but to no avail.

According to a member of the group, Suraji Abugri, they got the information that David had been repatriated from abroad and he is hidden in the neighbourhood, hence stormed the area to smoke him out.

"Even though we couldn't get him this time around, we shall continue monitoring to track him down. David can run but cannot run forever. We shall surely get him," he told this reporter.

At the Kusuntu Line area in Nima, the group also marched to the house of one, Faisal Adam whom was alleged to engage into gay practice. Faisal, was chased out of the Nima community in September 2019, when his alleged gay orientation was discovered. It was on record that Faisal was allegedly caught red-handed making love with his gay partner at his Nima residence.

According to the group, Faisal Adam until that infamous incident in September 2019, was a second-year student at one of the public universities in Ghana. The group said he managed to escape on the day he was caught and never returned to the community again until recently when they got information that he was back in the country and had been visiting the area secretly, mostly at night and during weekends.

"We are sounding a strong warning to Faisal and his cohorts that Nima and Ghana for that matter is not a fertile ground for gay practice and that we are still on the look for him. We promise Faisal that so long as our respective groups exist in Ghana, he and his gay associates will never have a breathing space as we are ever ready to crash them completely in the country. 'Once again, we say Faisal, you can run but you cannot continue to run and hide forever," Suraji Abugri intimated.

He threatened that on any day and at anytime that they will lay their hands on Faisal Adam, they will kill him as they did to his gay partner." The reward for anyone that brings shame and disgrace to our religion, community and country at large, by engaging into the abominable and satanic gay act is death", he stressed.

Still at Nima, the group marched to the compound of one, Iddi Sambo, whom they described as a traitor who associates with LGBTQ persons in the community. According to sources closed to the group, Iddi Sambo until he fled Ghana was a tailor by profession and married with two children. His association with homosexuals incurred him the wrath of the anti homosexual group that forced him to fled.

Even though Iddi too wasn't found after combing both his compound and tailoring shop respectively, the group threatened to deal with him severely anytime he is found. "Iddi Sambo would never go scot free for defying our warnings to refrain from engaging with and bringing his satanic and abominable associates into our community " a member of group warned.

At the Imam Amadu Street at Nima , the group also stormed a compound in search of one ,Ali Umar, another gay practitioner who was chased out of the community in November 2020. According to group, Ali Umar, a University of Ghana graduate who fled the community and Ghana at large ,was caught making love with his partner during the rampage.

" We recieved a tip off that Ali was among those repartriated from the United States recently and has returned to the community and was hiding at the residence" . We have therefore come to pick him up for punishment in order to serve as deterrent to gays and other miscreants in the community" the group's spokesperson stated.

He threatened that Ali can runaway but cannot hide forever and that they shall make Ghana a living hell for Ali and his cohorts . Our country is a religious and law abiding country and we shall not sit down and watch shameful , abominable human beings and traitors such as Ali Umar to destroy our country with their stinking LGBT practice.

One ,Baba Ibrahim Saeed, the former landlord to Ali Umar confronted the group and told them that Ali Umar has not been seen in the compound since the day of the attack. The landlord added that Ali Umar's room has already been rented out and it is now been occupied by a new tenant.

At Madina Zongo, the Safety Empire group marched into the compound of one alleged gay practitioner by name Mudasir Mohammed. Mudasir, an artist by profession was alleged to have been caught in November 2019 kissing and romancing his gay partner.

According to the group, some of their members who have been suspecting Mudasir of being a gay caught him and his partner red-handed kissing and romancing each other in a car parked in front of Mudasir's compound.

"Mudasir was able to escape that day and we never heard anything about him again until recently when we heard he had been brought back home from Japan. Gays have no place to hide in Ghana, we shall surely fish them out from their hidden places," he stressed.

Within the same Madina Zongo vicinity, they also stormed the residence of one Mohammed Mutawakilu who is currently at large due to his involvement with gay persons in the area. Mohammed , a taxi driver by profession who was attacked and chased away some few days ago, was alleged to had returned to the area and was hiding at his home. Unfortunately for the group, their target wasn't at home at the time of the operation but they threatened to search for and punish him .

"Mohammed Mutawakilu is a traitor and a disgrace to our community" ,a member of the group was quoted as saying. Your father is an Islamic cleric and well respected person in our community and beyond, why then must you engaged yourself into such an abominable and disgusting act , he querried . Anyone found to be a homosexual or supports homosexuality in our community must be seriously dealt with regardless of the person's background and Mohammed Mutawakilu would not be an exception, he warned.

He emphasised that Mohammed Mutawakilu can run but cannot run and hide forever and that they shall surely fish him out from his hidouts and teach him a bitter lesson he would not forget soon and will serve as deterrent to anybody who is towing the same line.

Another alleged runaway gay person Ibrahim Babangida who lived at Ashiaman, a suburb of Accra was also not spared.The group wielding machetes, stones, iron rods and other offensive weapons stormed the Ashiaman township ready to crash anyone suspected to be a gay or supports gay rights.

Addressing the general public after the operation, Mr. Hadi Alhassan, a member of the group, expressed his satisfaction on the operation even though none of their targets was found.

He said, "though we didn't get any of our targets, we sent a signal to the people that gay practice has no place in Ghana and that we are ever ready to crash the abominable act anytime and on any day."

The operation according to Mr. Hadi Alhassan was to also put fear in the people to deter anyone secretly involved in the gay practice to desist from the act before they are caught.

On what next for the group, Mr. Alhassan pointed out that they will continue monitoring and tracking down all gay suspects and promoters across the country.

"Our main objective is to create a Ghana without homosexuality. To that end, he promised that his group and its affiliate bodies are ready to eliminate the canker of homosexuality in Ghana. Gays and their supporters are not welcomed in Ghana as we are poised to making Ghana a living hell for anyone suspected to be gay or supports gay rights in the country," he told this reporter.

Four different groups involved in the fight against homosexuality in Ghana namely the Safety Empire, Mujahideen, White Chapel and the Kangaroos took part in the operation. Homosexual practice in Ghana is said to be gaining momentum amongst the youth particularly amongst second cycle school pupils in the country.