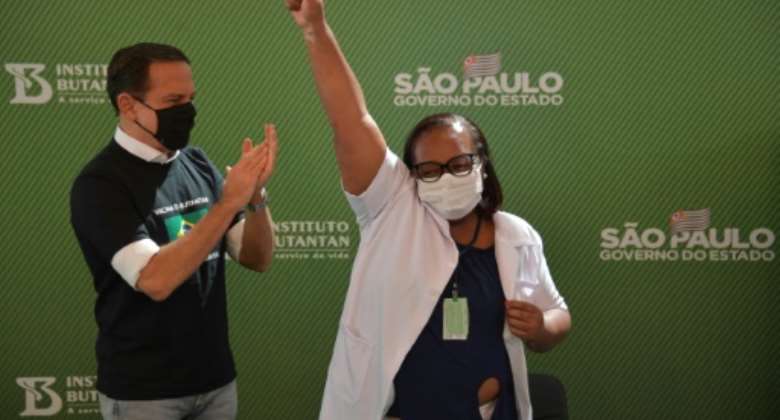 Monica Calazans, a 54-year-old nurse in Sao Paulo became the first person in Brazil to receive the Chinese CoronaVac jab after two vaccines were approved. By NELSON ALMEIDA (AFP)

The global Covid-19 vaccination drive gained pace Sunday as India pushed on with its massive campaign and Brazil approved its first jabs, while European authorities sought to allay concerns about delays in supplies.

Brazil's health regulator gave the green light for the Oxford-AstraZeneca vaccine and China's CoronaVac to be used as the Latin American giant suffers a devastating second wave of the coronavirus.

Monica Calazans, a 54-year-old nurse in Sao Paulo became the first person in Brazil to receive the Chinese CoronaVac jab after the Anvisa watchdog's highly-anticipated ruling.

Growing concerns over different strains of the virus have meanwhile prompted governments to tighten curbs in a bid to stem a global death toll that has already surpassed two million.

India's vaccination drive got off to a successful start on Saturday with more than 224,000 people receiving their first jabs and just three people hospitalised after side effects, the health ministry said Sunday.

The government plans to immunise some 300 million people out of its population of 1.3 billion by July -- equivalent to almost the entire US population.

In Europe, both France and Russia were gearing up for a key week in the vaccine effort.

Russia starts mass immunisations on Monday using its homegrown Sputnik V vaccine, while the French government is hoping to overcome fierce criticism of a sluggish rollout as it begins inoculating the over-75s.

France, which saw its death toll rise past 70,000 at the weekend, is set to begin inoculating people over 75 from Monday. By Christophe SIMON (AFP/File)

Across the European Union there have been concerns that delays in the delivery of the Pfizer-BioNTech vaccine could further slow a campaign which critics have condemned as less agile than in the United States or Britain, a recently-departed EU member.

US drugmaker Pfizer said it was working to "significantly" scale up production at its plant in Belgium in the second quarter.

"But it's better that it happens now when we have stockpiles than when the wider vaccination campaign starts."

Joe Biden's goal of seeing 100 million vaccine doses injected within his first 100 days in office is meanwhile "absolutely" achievable, top US scientist Anthony Fauci said, days before he is to become the new president's chief advisor on Covid-19.

"The feasibility of his goal is absolutely clear, there's no doubt about it," Fauci told NBC's "Meet the Press".

India's vaccination drive got off to a successful start with more than 224,000 people receiving their first jabs. the health ministry said Sunday. By Manjunath KIRAN (AFP/File)

Biden has unveiled a $1.9 trillion stimulus plan to revive the economy of the country worst-hit by the virus, which is approaching the dark marker of 400,000 deaths.

In Israel, the prison service said it would begin vaccinating all inmates, following an outcry over an announcement from Public Security Minister Amir Ohana that Palestinian prisoners would be the last to get inoculated.

Israel has given at least one vaccine dose to more than two million of its citizens, a pace widely described as the world's fastest per capita.

Spain has begun administering second doses to people who had already received the first at the end of December, mostly nursing home residents and care staff.

And in Norway, where 13 frail elderly people died after a first vaccine injection, the Medicines Agency said there was no cause for alarm after suggestions last week that the deaths could be linked to side effects.

"It is quite clear that these vaccines present very little risk, with the minimal exception of the most fragile patients," agency official Steinar Madsen told public broadcaster NRK.

Until vaccination is widespread, countries across the globe are still having to rely on lockdowns, curfews and social distancing to control the spread of the virus -- particularly as new variants spread.

In this elderly care home in Belgium, 111 people -- or two thirds of all residents and staff -- tested positive to the more contagious British variant of the novel coronavirus. By KURT DESPLENTER (BELGA/AFP/File)

On Sunday a Belgian elderly care home said that a British strain of the coronavirus, which several studies suggest is up to 70 percent more contagious, had been detected in 111 residents and staff. Three residents have died.

Fears over the strain were cited as the justification for Austria's decision to extend its third national lockdown by another two weeks until February 8.

After months of restrictions resentment is growing in some quarters, with around 100 people arrested Sunday at an anti-lockdown protest in Amsterdam.

Police used water cannon to clear the demonstrators, some of whom threw stones at the officers, Amsterdam city hall said in a statement.

Switzerland and Italy are tightening their restrictions from Monday and Britain will require all arrivals to quarantine and show negative tests. Oman meanwhile said it will close its land borders for up to two weeks.

In the world of sports, Australian Open chief Craig Tiley said the Grand Slam tournament will still begin next month, even as 72 players are now confined to their Melbourne hotel rooms for 14 days after coming into contact with Covid-19 cases on their inbound flights.