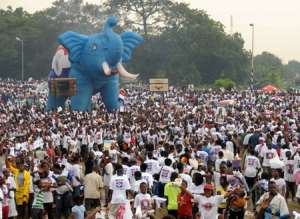 The New Patriotic Party (NPP) would elect a new candidate for the December 7, 2024 presidential election since Nana Addo's term as president would end on that date. Already names of two potential persons were being flung around - Alan Kyerematen (Alan) and Dr. Mahummadu Bawumia (Bawumia). The choice of one of these respectable men or any other, as per NPP's own principle of choosing presidential candidates, would be basically influenced by the concept of "adurumeso"- literary translated as "I am Next"

This write up examines this adurumeso concept in relation to the selection of either Alan or Bawumia as to who would be selected as NPP’s presidential candidate come December 2024. This discussion would be based on the following: (a) age- (i) who is older among the two (ii) how long has the individual been in the party; (b) NPP's own Dankwa-Busia-Dombo tradition; (c) NPP's Southerner-Northerner presidential ticket (d) electability and (e) any other related matters. There would be some suggestion(s) as to the preferred method for the selection of the individual concerned.

Among other things, one of the main factors considered in the selection of candidates for responsible positions is age as compared to the contestants. Where the contestants are equally qualified, depending on the situation, most people lean towards the oldest among them. Ghanaians traditionally adore the aged and give them preferences in most cases.

Based on this, Alan, the older of the two, in a raw traditional language would shout on Bawumia: "Kaa wo ho, firi ha ko! Akwadaa bone, wonua panyin adee wose yenfa ma wo" (Be quick and get out from here ! You want something that is for your senior brother). In Nigerian street parlance Alan would tell Bawumia " kro jorr! I senior you"

Another aspect of the age concept would be who was first in the party - experience. Here again Alan would get the upper hand since he had been among the party faithfuls for a while. Bawumia was introduced into the party somewhere in 2007 when he was chosen as the running mate of then candidate Nana Addo. Here is where the adurumeso concept becomes very clearly defined: "wo baa daben?" (when did you come in).

While this is ongoing something else has to be noted. So far as NPP as a party is concerned, like any others, succession is hereditary (any member can inherit or be elected to any position) but one wonders if it is hierarchical? If that was the case it would be clearly defined in the party's constitution. As at now leadership is gained through election and probably competitors throw in hierarchy for sympathy votes. It has to be noted that "promotion is not a long service award."

NPP as a party has been drumming into the ears of all others that they are descendants of what they call "Dankwa, Busia, Dombo tradition”. The names represent NPP's ancestors who variously played significant roles in the life of the party. Dankwa was one of the founders of the United Gold Coast Convention (UGCC), the progenitors of NPP; Busia of the National Liberation Movement (NLM) from the Ashanti Region became Minority Leader in the 1957 Ghana's parliament. Dombo, then leader of the party with a bigger numerical strength , Northern Peoples Party (NPP), ceded his leadership position to Busia. The two parties, NLM and NPP with other parties in parliament at the time, formed the United Party (UP) - an ancestral party of the present day NPP.

Suffice it to say that Busia went on to become the prime minister of Ghana in 1969; a descendant of Dankwa, Nana Addo Dankwa Akufo Addo, was sworn into office as the president of Ghana on January 7, 2017. Dombo is yet to be at the top. Between the two contestants, Bawumia seemed to carry the "genes'' of Dombo. What then prevents the NPP from giving him the mandate? Going by this NPP's logic, "hwan na aduru ne so?" (who's turn is it?)

From 1979, NPP's presidential tickets had always been based on the Southerner and Northerner dualism: PFP’s Victor Owusu and Tolon Na, Alhaji Yakubu Tali, (Asante/ Dagomba); NPP’s Adu-Boahen and Alhaji Issifu Alhassan (Akyem/Dagomba 1992); Kuffour and Ali Mahama (Asante/Dagomba 1996) and Akuffo Addo and Bawumia (Akyem/Mamprusi 2008-2020) On the top of these tickets had either been an Asante or Akyem (Southerner).

NPP has not had the chance to have the Northerner-Southerner ticket. This could be argued among other things that perhaps there had not been any serious Northerner as contender for the top of the ticket. Coincidentally, the National Democratic Congress (NDC), NPP's main opponent in the country, has had the chance of fielding various combinations of the peoples of Ghana and won in almost all cases.

NDC had been teasing NPP as an "Akan Party" based on the way NPP had been selecting its presidential ticket. NPP would ignore this in 2024 at its own risk. The dynamics appeared to have changed. With the performance of Bawumia as a vice president, NPP had been thrown a life wire by its opponents, NDC, waiting for NPP to hang itself. A Northerner-Southerner ticket would completely shut down NDC's refrain that "NPP is an Akan Party." There is no other time for NPP to prove itself otherwise than to put Bawumia (Northerner) on the top of its ticket for the 2024 presidential election.

The stakes for the 2024 elections are very high. It is going to be the period for the "yesesamu campaign", apologies to Paa Kwasi Nduom, then of the CPP. This campaign was effective in both 2008 and 2016. If NPP was to beat this yese samu concept it has to "sesamu '' on its own and beat the concept before it started. NPP cannot do better.

Finally, the issue of electability, defined here as who between the two could win Election'24. One thing must be clear here. It must be accepted that NPP had not been lucky with its first time presidential candidates. Dr. Nkrumah (Nkrumah) of the Convention People's Party (CPP) made mincemeat of both Dr. J. B. Dankwa and Prof. Busia (Busia) in the 50's. It was in 1969 when Busia, on his next attempt, became prime minister.

Victor Owusu (Victor) of the Popular Front Party (PFP- another forebearer of NPP) had the shock of his life when he was beaten by then politically unknown candidate, Dr. Hilla Limann (Limann) of the People National Party (PNP) in the 1979 presidential elections. Limann was then only known in diplomatic circles.

Prof. Adu Boahen of the NPP lost in his very first attempt at presidential elections in 1992 to Ft. Lt. (rtd) Rawlings. The same fate befell John Agyekum Kuffour (JAK) in 1996. JAK won on his second attempt in 2000. Nana Addo did not do any better. He had to win on his third attempt. If the party had to stay in power beyond 2024 then NPP would have to put an end to this particular "hereditary trait".

For the 2024 presidential elections, NPP would be confronted with the idea of breaking two separate but related jinxes: (a) the defeat of its first time presidential candidates and (b) the two-term recycling of parties ruling Ghana.

A review of both Alan and Bawumia's electoral history would be in order here. Allan had never participated in any national elections . His only two attempts were at the NPP's primaries in 2007 and 2015. In 2007, he placed a distance second in a field of 17 contestants. In 2015 he could not even make 10% in a field of only two. If selected, 2024 would be Alan's first attempt at presidential election. As per NPP's inherent hereditary trait discussed above, the party would lose the election.

Bawumia is even worse. Until he became a vice-presidential candidate in 2007, he was not known in the field of politics let alone contesting for an electoral position. He was then a technocrat. But then there is something special about him - that he had broken the jinx of electability about himself.

To break these jinxes, NPP has to review its Southerner-Northerner ticket by studying NDC's winning strategies. NDC had on two occasions, Limann (1979) and John Dramani Mahama (Mahama) (2012) presented Northerner-Southerner tickets and in each case won at their very first attempt.

Other consideration(s). As part of winning Election'24, NPP should be looking at one particular group of people in Ghana, Nkranfuo, especially their women. Neither NPP, NDC nor any other serious political party in Ghana had paid special attention to this group even though they have the numbers. It is believed that NPP's Northerner-Southerner (Nkrani baa) ticket would do a major blow to its opponents and win the presidency for the party. This itself would be a deviation from the norm (yeasesamu) and break the jinx for the party.

There is the need for the NPP to be careful about how it would select its presidential candidate. It is suggested that NPP should adopt the US method of selecting delegates and for that matter its candidates for party positions, presidential and parliamentary elections.

To this end NPP is encouraged to compile a national register of all its members on constituency basis and convert the same into voters' register. This should be done far in advance before serious candidates for various positions in the party show up. Copies of such registers should be officially given to the Electoral Commission who would be contracted to conduct NPP's elections.

It is believed that this would likely reduce the incidence of financial manipulation by contestants and make the winner a true reflection of the party's choice. Delegates' conference would then be an affirmation of what had already been determined at the primaries in the constituencies. Parliamentary candidates would have to tour and canvas for votes throughout their various constituencies while presidential candidates would tour the country to sell their ideas to whoever would buy. To crown it all the elections would be done on the same day for both the parliamentary and presidential candidates.