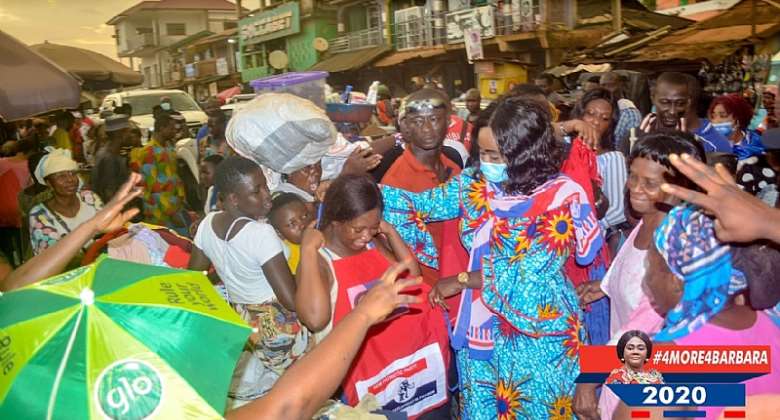 With barely eight days to the presidential and parliamentary elections, the Member of Parliament (MP) for Prestea Huni-valley constituency, Hon. Barbara Oteng-Gyasi, has charged eligible voters in her area to turn up in their numbers and vote massively for the New Patriotic Party (NPP) on December 7.

The MP said, the NPP government has implemented policies and programmes that are impacting on the lives of Ghanaians hence the need for constituents to vote 'bum bum' for President Akufo-Addo and her good self to renew their mandate to continue their national transformation agenda.

She said in spite of the disbelieve of the NDC, the Akufo-Addo administration, have proven that an opportunity for the NPP to stay in power for long will translate into massive development for the country.

The legislator made the call on Friday, November 27 on her routine campaign tour at Dagaati compound a suburb of Prestea.

The MP, who is seeking re-election in the upcoming general election slated for December 7 this year, earlier visited the Prestea market with four more for Nana mantra.

She interacted with traders and distributed branded NPP aprons and umbrella hats, bringing activities to a standstill at the market.

The MP ended her day at Energy 93.3 FM, a Prestea based radio station where she was interviewed live on the authoritative political talk show the Energy Platform.

She used the occasion to interact directly with the good people of the constituency and explained to them her contributions and that of the NPP administration towards the development of the area.