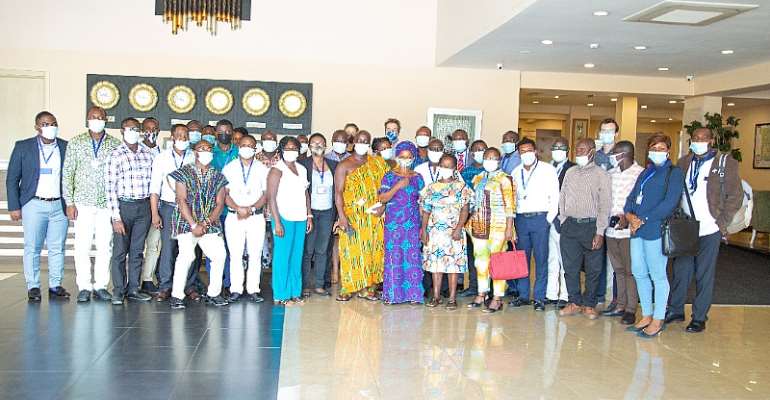 In all countries where cocoa is grown, the sector is dominated by smallholder farmers, especially in Africa. The recent cocoa barometer report, which depicts the distribution of the cocoa sector profits along its value chain, observed that unfair distribution of value and power in the cocoa value chain are part of the root causes of extreme poverty for cocoa farmers in West Africa.

At the same time, the cocoa supply chain is increasingly dominated by a select group of large corporations where mergers and takeovers have resulted in just a few companies dominating up to 80% of the whole value chain, while farmers lack a sufficiently organised voice to be strong actors.

CSOs in the cocoa sector from Ghana and Ivory Coast have urged government to secure living income for cocoa farmers to alleviate them from poverty.

Mr. Obed Owusu Addai, the Lead Campaigner for EcoCare Ghana reiterated that “despite all efforts aimed at improving the Cocoa Sector, the core of the problem is still not being addressed; the extreme poverty and lack of their voice debate."

He observed that West African cocoa farmers live well below globally defined poverty levels. In Côte d’Ivoire – the world’s largest producer of cocoa – a farmer should earn four times his current income in order to reach the global poverty line of $2 a day.

“To achieve a sufficient level of income to cover basic needs of cocoa farmers, the Living Income Differential would probably need to be a lot higher than what farmers currently receive”.

He made the statement during a 2 days International Conference on Cocoa Pricing and Sustainability, organised by EcoCare Ghana in Accra.

Speaking on the theme, "Regulating Responsible Trade in Forest-risk Commodities- the Case of Cocoa in Ghana", Mr. Clement Akapame, a Partner at Taylor Crabbe Law Firm advocated for a private sector-led initiative to address concerns in the cocoa value chain.

Mr. Antonie Fountain, of Voice Network, questioned how all the agreements and European Union measures will translate to ensuring farmers actually get the money in their pockets? He was of the view that, “without proper mechanism for transparency and accountability, setting living Income Differential is Dangerous”.

He therefore urged governments of Ghana and Ivory Coast to ensure transparency in the money coming into their respective countries.

Ms Leticia Yankey, the founder of Cocoa Mmaa, a cooperative that seeks to empower female cocoa farmers, expressed concern about the lack of consultation of cocoa farmers during key decision making by governments, private sector and other key stakeholders in the cocoa value chain during policy formation and decision making.

She was grateful for the opportunity given to cocoa farmers, especially females to be part of the conference. She identified that one of the key contributing factors to cocoa farmers living below the poverty line is financial illiteracy.

She urges stakeholders to empower them on financial management to help boost their living income.

The conference was funded by ClientEarth, through the United Kingdom Department for International Development’s (DfID) Forest Governance, Markets and Climate (FGMC) Programme. It was supported by Fern, Taylor Crabbe and the Ghana Civil Society Cocoa Platform.

The Cocoa Conference aimed at clarifying the applicable regulatory frameworks governing cocoa production and trade, and bringing relevant stakeholders together to discuss and develop concrete workable strategies and roadmaps to address pricing challenges in the cocoa sector; with emphasis on guaranteeing sustainable cocoa production.