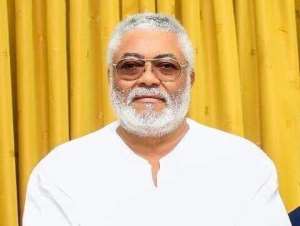 “Any man's death diminishes me, because I am involved in Mankind. And, therefore, never send to know for whom the bell tolls; it tolls for thee.” - John Donne

BE CAREFUL; don't get involved in mmusuo… You don't know Rawlings; he is like a chameleon… That was K's answer to Y's message that JJ had passed on. Then, the truth dawned on all of us. He was born some 73 years ago at Accra to the late Madam Victoria Agbotui of Dzelukope, Keta and James Ramsey John from Castle Douglas in Kirkcudbrightshire, Scotland. His father was a chemist and his mother did not have a clear profession, but lived at Adum, Kumasi. That gave him the colour with which he charmed some Ghanaians.

Sorry, our readers, the people of Dzelukope and all Ghanaians “yaa-ko” – following tradition and custom. Our elders say when somebody dies, you don't say “bad things” about him. But Rawlings was a different person, not particularly berthed in protocolic gestures.

He had attempted a coup d'etat on 15th May, 1979 and was being tried. He charged the court-martial to leave his men alone: he personally (alone) was responsible for whatever happened. He was placed in a guardroom, and Major Boakye-Djan who had been Rawlings' best man at his wedding with Nana Konadu Agyeman, led an insurrection on 4th June and got him out. Kutu-Acheampong, Akwasi Amankwaa Afrifa, Akuffo, Commander Boakye, Joy Amedume, Roger Felli, Utuka, Kotei – all senior army officers were lined up by the AFRC and shot by firing squad, tried by kangaroo courts – for corruption. Some loud-mouthed students shouted “Let the blood flow”.

Ghana was then preparing for elections… and Dr. Hilla Limann whose party was PNP was voted to power. When handing over to Limann, Rawlings warned him that he was on probation! The coup-makers were given some luscious, mouth-watering “handshakes” and they all left the country, save Rawlings.

On 31st December, 1981, Limann (who dismissed all warnings to beware of the wily Rawlings) retorted: “Gyato nntumi nnye fee”) suffered. The People's National Defence Council: he was Junior Jesus and there was contemplation that all those forty years and above ought to be eliminated. “Essential commodities” were all sold out; no soap except “don't touch me”, no food to eat. Ghanaians wore the “Rawlings chain”. Scarcities were attributed to market women doing “kalabule” and “hoarding”. There were house searches and those arrested hoarding wax print, soap, sardines, even empty bottles were given the bastinado (canes), the women being beaten on their sexual parts. Curfew was 6pm to 6am: no night life, and in Kumasi after the killing of Odiyifo Asare, anyone walking towards Kejetia had to raise his hands.

Then in 1992, Rawlings metamorphosed into a civilian to stand election as civilian President, leading the party he formed, National Democratic Congress. In 2002, Kufuor established the Truth and Reconciliation Commission. That was a rare opportunity for Rawlings to go and utter just a word “sorry” and Ghanaians including Kweku Baako, Kwesi Pratt, Sam Okudzeto, Mike Adjei, Hans Djaba and relations of Tommy Thompson, John Kugblenu would have forgiven him. Appiah Menkah, and Boakye Mattress would never forget their ordeal.

Like Robert Louis's Dr. Jekyll and Mr. Hyde, Rawlings had “two traits” a close ally, Professor Kwamena Ahwoi reveals in “Working with Rawlings”. He says: “The unique thing about Rawlings' megalomania, however, was that he was able to cover it up. By behaving very humbly, by identifying himself with the ordinary person, by speaking the language of the street; and by seeming to be unostentatious, Rawlings presented himself as somebody who was completely uninterested in power but upon whom power had been thrust. My dealings with Rawlings, however, revealed to me that he was very much interested in power and that he was very reluctant to lose power.” For somebody preaching probity and accountability, it was shocking to hear that he took only $2m from Sanni Abacha, and not $5m.

Mahama charges Ghanaians to “…use this occasion of his (Rawlings') passing to bring healing to this country”. Asiedu Nketia (who had tamed the barking dog) says, “The best tribute to Rawlings is to… be fired up by the demise of our founder to win the election and rescue this nation… from the very ills he fought against…” What about the National Democratic Party (NDP) led by Rawlings' wife?

Serwaa Acheampong, a daughter of Kutu Acheampong, notes: “… I had spent my life hating him (Rawlings) for having killed my father… I feel cheated, because unlike my father, Rawlings' death was too easy, too comfortable, probably. Death by firing squad, that's how my father died when I was just six years… His (Rawlings') children and I are the same, fatherless! But at least, they grew up knowing their father… If there is an after-life …, I wonder what Rawlings will tell my father… I feel nothing about the man, except pity for the children who now know the pain of losing a father…” A twitter user answered: “It was necessary back in the days. Do you know what revolution is? … allow the hero of our time to rest.” And Ezenator would recall her father, who had “a wicked sense of humour” teach her how to fly! Perhaps not using taxpayer's money to buy fuel. Afrifa's grandson noted: “… I approve this (Rawlings' death). Oh, what a happy day…”

And Arthur K says: “I have tried to summon grief but have been unsuccessful… As we eulogise Mr. Rawlings, let us set a time to acknowledge his victims and their pain…” To a twitter user, Arthur K's comment is “absolute rubbish”.

And on TV, one Dr. Samuel Adu Gyamfi, head of Department of History and Political Science, calls the 1966 coup, an “inglorious 1966 coup”. He does not see anything “inglorious” about the 1979 or 1981 coups d'etat. He must be too young to have lived under a one-party state or the Preventive Detention Act… Does one remember the great historian Ali Mazrui when he said: “Nkrumah began his political career as a democrat and ended as a dictator, but Rawlings began as a military dictator and ended as a democrat.”

What changed the colossus Rawlings into a democrat was the resistance he faced from the Ghana Bar Association, who had abandoned the kangaroo courts, the Association of Professional Bodies, including doctors and engineers. Thomas Jefferson kept repeating John Philpot Curran (1770) the Irish Mayor: “Eternal vigilance is the price of liberty”: boycotts, strikes, demonstrations, et cetera, to counter the abductions, and one person whose name cannot be lost is Professor Adu Boahen who broke the “culture of silence”. And the Catholic Standard, edited by Bishop Palmer-Buckle.

President Nana Akufo-Addo at UDS, Tamale, was reported as proposing the university to be named after Rawlings, which he had declined: “If Rawlings' own sense of modesty probably compelled him to decline such a proposal while he was alive, let the people's voice now prevail, on his passing…” We dare ask: why? Julius Caesar refused the crown three times… Casca: “I saw Mark Anthony offer him a crown and he refused it… (yet) he was very loath to lay his fingers off it…” Mr. President, “Beware, the Ides of March!”