Please, The Police -A Test Of Leadership 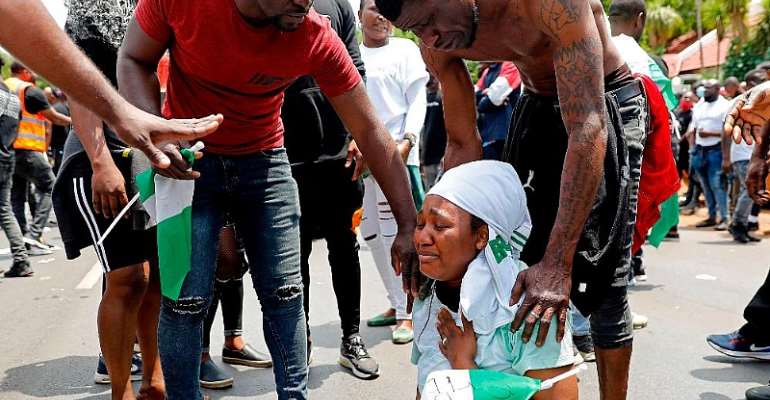 Best Case Scenario
We will have to employ a best-case scenario with this piece. And pretend, for the most part, that both ‘opposing’ teams mean well in the absolute—specifically, the Nigerian government and the SARS it birthed. Let us pretend that what we live in is Plato’s utopia. And the Nigerian government and its SARS, are the philosopher king. Let us pretend for a moment that SARS did not consciously morph into something akin to criminals (You can do away with ‘akin’ and go straight for ‘criminals’); that it was not a premeditated decision to abuse power; that all we have here is an entity drunk with power for lack of supervision. Let us pretend for a moment that the video of President Buhari laughing at the suggestion of compensation for victims of police brutality was, as Shaggy said, ‘it wasn’t me’—it wasn’t him; that it was his clone, or that he was just coughing, or that it was a nod of agreement.

We will, after pretending that all these are truths, find amidst these supposed truths, one unwavering truth: this all has been a test of governance.

The Stereotypical Evil Stepparent
The narrative of crime and the curbing thereof are not narratives peculiar to some nations and not to others. It is not American, European, neither is it Nigerian. It is a test all governments, with their citizenries go through. But how well will an agglomeration of people—a society fare in its bid at this curbing?—that is what distinguishes a functioning society from a failed one. Will governments, leaderships of societies in their bid at peace and order do so, skillfully like able, loving parents who ultimately mean well for their children, and match their actions with their intentions? Or will these governments morph into tyrants, the stereotypical evil stepparents, in this supposed bid at peace?

I told you before in the two articles preceding this one: Europe, a moment in its history assumed the latter—tyrants in the bid at peace; America’s law enforcement has always been so—tyrant for a portion of its populace (African Americans), from the very day these people were forced into that nation. In Nigeria, Blacks have felt the brunt of this tyranny of law enforcements, in their own homes, arguably, since the formation of the Special Anti-Robbery Squad (SARS) in 1992.

How do we get here?
This parenting thing, it takes tremendous skill. To be able to parent one’s children through the different stages of life—from childhood when one is but stupid for the most part, to adolescence, when one is almost always unnecessarily curious (even with curiosities which have the record of killing the cat), to puberty when one is restless—restless for adulthood hence undoubtedly reckless in their decisions and actions. For a parent to be able to effectively and efficiently undertake the task of parenting such children, in all these varying stages—it ought to take tremendous skill.

So, then a nation. Nations, with their selection of leaders; leaders who undertake the nuanced task of parenting entire citizenries—this duty, it is not for the faint of heart. It is not for the temperamental, the weak in mind (‘Mr./Ms. weak in body’ might have a fair chance, but ‘Mr./Ms. weak in mind’, never!) USA has learnt this fact in the hardest of ways with Donald Trump. Fighting fire with fire—that is not parenting, it is not leadership, it is a strategy against external foes—in the very worst of situations. Meeting fire with water—that is true leadership (and I am not suggesting that Nigerian police pour water on protestors, just to be clear.)

Frankenstein’s Monster
You know you are doing something really wrong when a people for whom you have supposedly created a system of protection take to the street to demand an end of this same protection. These are not senseless, suicidal people who do not see the need for protection against criminals. ‘The Police is Your Friend,’ ‘Service with Integrity’, ‘To Protect and to Serve”, who in the right minds would fight these words? Better still, who would fight institutions proposing to act on these words? But as several instances of expectations v. reality show, there is clearly a disconnect between what the government said it would do with the creation of this particular law enforcement mechanism (SARS) and what really is ensuing.

Frankenstein’s Monster, no? The poor guy, Frankenstein never intended that this creation of his, borne out of the fervor of scientific curiosity, would turn around and kill all the people he held dear. Chances are that he would not have created it, had he foreseen his end. SARS has become to the Nigerian, Frankenstein’s Monster. Let no country look upon such narratives as foreign and ludicrous. This can easily happen to any country—from Ghana to Canada.

What Nigerians are fighting now, is woefully similar to what African Americans are and have for decades upon decades, been fighting. It isn’t an issue of a fall from grace—that the police service, intending to do right, have been pushed to the wall, that they have no option but to employ wrongful means, thus have slowly, to their own dismay perhaps, morphed into something they themselves cannot recognized. This is not the case. What this is, is symptomatic of a wider problem of widespread corruption and systematic inequalities. The apple does not fall far from the tree, does it? The police do not exist outside the realm of governance, I noted in the article preceding this. They are what their respective governments are.

We, then, can never fault a people (the youth, especially) for taking to the streets to, once and for all, insist on the uprooting of cancerous cultures of corruption and lawlessness in their nation’s leaderships (consequently in its agencies and institutions. Case in point: its police). One would think that leaders of such countries, with their supposed love for law enforcement (properly so-called), would themselves take to the street, join protestors in their demands.

A Semantic Shift
Understand that agencies, ideologies, institutions, etc. like words may easily undergo a shift—a shift of perception. The word ‘ambition’ for example, literally meaning ‘to go around’ was, not until the Middle Ages, a bad word. At the dawn of the 16th century, the word was to undergo a semantic change, to the positive connotation we know now. Analogously, SARS may have received the nod of the populace at its formation, because its founding aim to maintain law and order may have been deemed agreeable. But the institution underwent a semantic drift—with its own actions, it underwent this shift. Hence, the word SARS to the Nigerian, now, can only call to mind tyranny, brutalities, corruption, harassment, killings, assaults, infringements of rights and freedoms—freedom of expression, movement, right to life, property etc.

This has been a test of leadership, I repeat.
As we keep witnessing in Ghana, the intermittent springing up of gruesome acts here and there—gruesome acts which we, like Canadians, insisting on our inherent goodness, are quick to suggest are perhaps not by Ghanaians—we approach this crucial test. This is a test of leadership (for both present and future governments). Ghanaian governments must be prepared to flex their good parenting muscles.