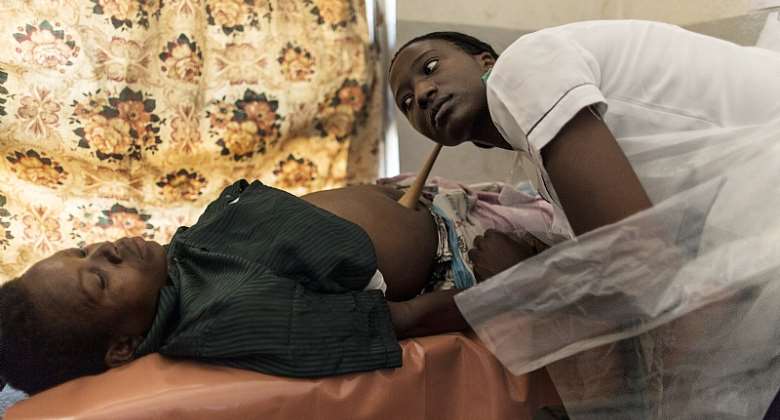 Male involvement antenatal care helps with the uptake of services and retention in care of both the mother and her baby. - Source: Marco Longari/AFP via Getty Images

When men are excluded from antenatal (prenatal) care, or only participate in a limited way, it's a lost opportunity for the whole family. This exclusion is seen more in patriarchal societies.

Prenatal care services are traditionally designed to serve women . But male involvement provides an opportunity for their increased contributions both within the health system and at home. For example, getting fathers involved in the prevention of mother-to-child transmission of HIV is critical for the uptake of services and retention in care of the mother and baby. When men are involved there are better outcomes for their HIV exposed or infected children. It can also afford the men access to HIV and other sexually transmitted infections services.

But male involvement in maternal and child health services is low in diverse settings globally .

To get men involved, it's necessary to understand what blocks or eases the way. The strategy should be contextually relevant too.

From 2013 to 2015, we conducted a research project in Malawi to explore this. The project was done in two phases. We first wanted to determine the barriers to men being more involved. Based on these findings we developed and tested an intervention for better participation. This intervention comprised giving pregnant women an invitation card for their partners.

We found that men who received invitation cards to their partners' appointments were more involved in the health services. We believe that scaling up the use of this invitation card system could encourage more male participation in Malawi and similar settings.

In the first phase, we conducted an exploratory qualitative study to describe the barriers to and enablers of male involvement in antenatal healthcare. The study was done from December 2012 to January 2013 at a health centre in Blantyre, Malawi. We conducted six face-to-face interviews with healthcare workers and four focus group discussions with 18 men and 17 pregnant women attending the clinic. We also wanted to identify the relevance of, and strategies for, involving men in the prevention of mother-to-child transmission of HIV.

One of the barriers we found was that these services were offered in spaces that focus on mothers. The focus of the services team is on the pregnant woman and the pregnancy and rarely, if at all, on the male partner. History taking, physical examinations and diagnostic assessments centre on the woman. The health system does not offer male-friendly services in the antenatal care clinic.

Men generally perceive clinics as more women and child friendly. They may have concerns about services provided by female health workers, and their work schedules may not fit with the opening hours and long waiting times at clinics. The health system doesn't have a clear strategy for involving men. We found that men mostly stay with their partners during the HIV counselling and testing session. For the rest of the antenatal care appointment they often wait for their partner outside .

Our study further showed that men could be involved in several ways . These include participating in health education , providing financial and material support for the delivery or making the decisions that help the expectant mother to use health services.

We tested an intervention in the second phase of our study: an invitation card to encourage men to come with the women for antenatal care. This study was done at two health centres in Blantyre. The message on the invitation card was informed by the results from our first phase. The men preferred the card not to mention HIV testing.

The study had an intervention and a control arm. In total, we recruited 462 pregnant women. Of these, 230 were in the intervention arm where they were given an invitation card to pass on to their partner. The women in our control arm were asked to invite their male partners verbally, which was standard practice at the time. All women were followed for six weeks and had two follow-up visits. We did not trace them to check what was happening, to avoid interfering with the intervention.

Our results showed that more women (65 of 230 or 28.26%) in the intervention returned with their partner at the next visit. But only 44 of 232 (18.97%) from the control arm came back with their partners. The differences observed were statistically significant. We concluded that an invitation card addressed to a male partner and passed on by his partner is an effective strategy for getting men more involved in services that aim to prevent mother-to-child transmission of HIV.

To our knowledge, this was the first time this health service innovation had been tried in the country.

We spoke to the women who showed up at the clinic without their partners after both kinds of invitation. Some (17.3%) said their partners weren't interested; others (81.8%) weren't available .

In subsequent research colleagues at South Lunzu and Mpemba health centers and Queen Elizabeth Central Hospital in Malawi were able to identify couples' health education needs. These authors also found that couples who attended antenatal care together were more prepared for delivery compared to those where only the woman attended the antenatal care sessions.

We recommend that an invitation card be used to invite male partners to attend antenatal care services.

There is a need to offer the services at hours and on days when men can attend as well. For instance, the services could be available over the weekend or later in the evening. The design and delivery of services should be done with men in mind.

Alinane Linda Nyondo-Mipando receives funding from Malawi government through University of Malawi where she works. This research was supported by the National Health Research Strengthening Capacity Initiative of Malawi and the Consortium for Advanced Research on Africa. The funders of this study had no role in the design of the study, analysis of the results, and preparation of the manuscript or decision to publish. Alinane Linda Nyondo-Mipando has no conflicts of interest to declare.

Adamson S. Muula receives funding from the Malawi Government through a credit facility from the International Development Association (IDA); funding the African Centers of Excellence II (Project Number : ACEII 048 Credit Facility : IDA; Credit Number : P151847. This research was also supported by the Consortium for Advanced Research Training in Africa (CARTA). CARTA is jointly led by the African Population and Health Research Center and the University of the Witwatersrand and funded by the Carnegie Corporation of New York (Grant No--B 8606.R02), Sida (Grant No:54100029), the DELTAS Africa Initiative (Grant No: 107768/Z/15/Z). The DELTAS Africa Initiative is an independent funding scheme of the African Academy of Sciences (AAS)'s Alliance for Accelerating Excellence in Science in Africa (AESA) and supported by the New Partnership for Africa's Development Planning and Coordinating Agency (NEPAD Agency) with funding from the Wellcome Trust (UK) (Grant No: 107768/Z/15/Z) and the UK government, the statements made and views expressed are solely the responsibility of the authors.

By Alinane Linda Nyondo-Mipando, Lecturer in Health Systems and Policy, University of Malawi And

Gov’t has taken the boldest initiatives since independence t...
52 minutes ago